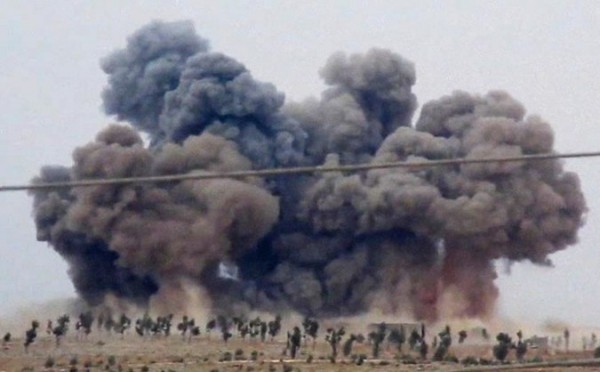 A video still showing the site of an airstrike in Idlib Province in Syria on Thursday. Credit Hadi Al-Abdallah, via Associated Press
Share:

The already fragmented battlefield in Syria grew even more complicated on Friday, as Russia and Iran expanded their military efforts to defend the beleaguered Syrian government in defiance of President Obama, who predicted that their actions would lead only to a “quagmire.”

In his first comments since Russia began airstrikes on Syrian targets this week, Mr. Obama said that Moscow was acting “not out of strength but out of weakness.” Bristling at criticism of his own Syria policy, he rejected domestic opponents who offer “half-baked ideas” that amount to “a bunch of mumbo-jumbo.”

“An attempt by Russia and Iran to prop up Assad and try to pacify the population is just going to get them stuck in a quagmire and it won’t work,” Mr. Obama said during a news conference at the White House on Friday, referring to President Bashar al-Assad of Syria, a longtime ally of both Russia and Iran. “And they will be there for a while if they don’t take a different course.”

Neither Russia nor Iran showed signs of listening. While Moscow widened its airstrikes to hit Islamic State territory for the first time, Russian troops have unloaded a major long-range artillery system to add more firepower to its deployment in Syria, according to an American official. At the same time, American officials said Iran had sent additional ground troops to bolster Mr. Assad’s government.

Mr. Obama was left to confront a deteriorating situation over which he seemed to have even less control than before. In New York, Secretary of State John Kerry met with the foreign minister of Iran without any apparent breakthrough, while American allies from Europe and the Middle East publicly called on Russia to stop bombing the moderate Syrian opposition to Mr. Assad.

The president said that his program to select, train and arm Syrian rebels to fight the Islamic State, also known as ISIS and ISIL, had failed in part because he had insisted they battle only the militants — and not also focus on toppling Mr. Assad’s government. “I’m the first one to acknowledge it has not worked the way it was supposed to,” he said. Instead, he said the United States wanted to work more closely with Kurdish allies who have enjoyed some success against the Islamic State to see “if we can built on that.”
But he repeated his conclusion that there was no military solution to the long-running fratricidal war, only a political settlement that has to end with Mr. Assad’s departure from power.

“The problem here is Assad and the brutality he’s inflicted on the Syrian people,” Mr. Obama said. While the United States will work with “all parties” to broker a transition, he said, “we are not going to cooperate with a Russian campaign to simply try to destroy anybody who is disgusted and fed up with Mr. Assad’s behavior.”

Russia expanded its bombings on Friday, saying its warplanes struck seven targets, including a command post and training camp near Raqqa, the northeast Syrian city that the Islamic State has converted into the capital of its self-proclaimed caliphate straddling Syria and Iraq. Until now, Russia had hit territory that was not dominated by ISIS but, in some cases, where American-supported rebels were located.

Similarly, Iran was reinforcing its own presence in Syria. American officials said 300 to 600 Iranian troops had arrived in recent days, augmenting some 1,500 who have been in Syria for months along with more than 5,000 militia fighters from Hezbollah, the Lebanese Shiite group allied with Iran that has played an increasingly important role defending government territory.

Western diplomats at the United Nations expressed concern that the Russian strikes will only embolden Mr. Assad, making any political settlement more difficult. For Arab allies in particular, one such diplomat said, it would be impossible to enter into political talks without resolving that Mr. Assad would go after a transitional government.

“It’s very important we don’t leave this question mark open,” said the diplomat, who spoke on the condition of anonymity to address relations between allies.

Some of those regional allies joined the United States and Europe in Friday’s statement condemning Russian actions and urging Moscow to focus any strikes on the Islamic State. “These military actions constitute a further escalation and will only fuel more extremism and radicalization,” said the statement, signed by the United States, France, Germany, Britain, Qatar, Saudi Arabia and Turkey.

Mr. Kerry met with Foreign Minister Mohammad Javad Zarif of Iran, who was in New York for the United Nations meeting. The State Department said that the Zarif meeting focused on the recent nuclear agreement, but an Iranian official suggested that Syria also came up. Mr. Kerry also met with Yusuf bin Alawi, the foreign minister of Oman, which was a central intermediary with Iran leading to the nuclear deal. 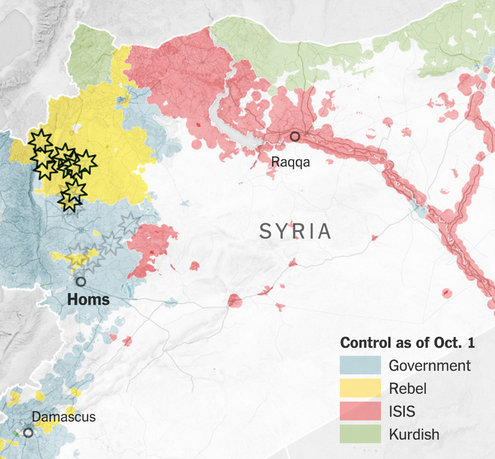 Syria welcomed Russia’s help on Friday. Foreign Minister Walid al-Moallem, addressing the United Nations General Assembly, said the Russian operations were part of an effort to fight terrorism, and he ridiculed Western advocacy for political changes during such a battle.

“Syria cannot implement any democratic political measures related to elections, a constitution or the like while terrorism is striking at home and threatens innocent civilians in the country,” he said. He castigated the West and Arab states for failing to stop the influx of foreign jihadists into Syria, blaming the alliance for creating the crisis. “Our vision proved to be correct,” he said.

The Syrian minister’s presence at the United Nations this week created some awkward moments for Mr. Kerry, who will not directly engage him. When Mr. Kerry walked into a meeting room Wednesday evening and saw Mr. Moallem speaking with the Russian foreign minister, Sergey V. Lavrov, the secretary quickly left, according to two diplomats.

The Russian strikes also preoccupied a separate summit meeting in Paris on Friday meant to deal with another crisis involving Moscow, the insurgency in eastern Ukraine. President François Hollande of France spoke with President Vladimir V. Putin of Russia for an hour about Syria before the broader meeting.

At a news conference afterward, Mr. Hollande said he told Mr. Putin that any solution in Syria “must include the departure of Bashar al-Assad” and that the Russian airstrikes should only target ISIS. Chancellor Angela Merkel of Germany said “the solution must take into account the interest of the opposition. We need a solution after 250,000 dead.”

In Moscow on Friday, the Defense Ministry said its warplanes hit an ISIS training camp near the town of Maaden Jedid and a command post near Kasert-Faraj, both southwest of Raqqa.

The Russians also reportedly hit Qaryatayn, south of Homs, according to Mayadeen TV, a Lebanese channel close to the Damascus government. ISIS forces captured the town recently and are still holding some Assyrian Christian hostages there.

The other four areas that Syrian state TV reported being hit by Russian forces were known to be controlled by rebel groups other than ISIS. The Russian Navy meanwhile deployed the missile cruiser Moscow to defend Russian planes stationed near Latakia, according to Interfax.

Mr. Obama, who met with Mr. Putin in New York on Monday, excoriated him on Friday.

“Mr. Putin had to go into Syria not out of strength but out of weakness, because his client Mr. Assad was crumbling,” Mr. Obama said. Making no distinction between the Islamic State and other rebel groups is a “recipe for disaster” that would “turbocharge ISIL recruitment and jihadist recruitment,” he added.

Clearly frustrated by assertions that Mr. Putin had gotten the upper hand, Mr. Obama said the Russians were the ones who were isolated. “Iran and Assad make up Mr. Putin’s coalition at the moment,” he said. “The rest of the world makes up ours.”

He dismissed critics of his policy. “When I hear people offering up half-baked ideas as if they are solutions or trying to downplay the challenges involved in the situation, what I’d like to see people ask is, specifically, precisely, what exactly would you do and how would you fund it and how would you sustain it?” he said. “And typically, what you get is a bunch of mumbo-jumbo.”

In response to a reporter, he strained to explain that he did not mean his former secretary of state, Hillary Rodham Clinton, who just Thursday backed a no-fly zone in Syria, a policy he has rejected. But he suggested her view was a campaign position.

“Hillary Clinton is not half-baked in terms of her approach to these problems,” Mr. Obama said. “But I also think that there’s a difference between running for president and being president.”