Analysis of Syria crisis: where do the major countries stand? 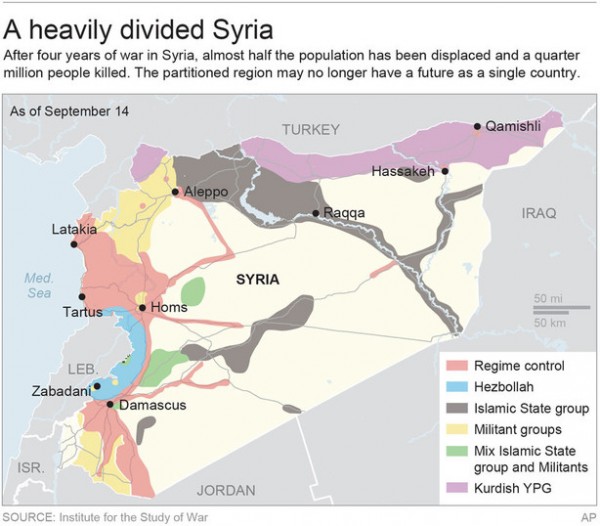 The government, dominated by President Bashar Assad’s Alawite sect, controls Damascus, the Alawite heartland along the Mediterranean coast, other cities and connecting corridors in between. Kurds run their own affairs in the northeast. The militant Islamic State group controls much of the Sunni heartland in the east. Other Sunni rebels control pockets in the north and south. The Druze are starting to talk about autonomy in their southern areas as well. Syria has actually been partitioned but no one wants to acknowledge this formally
Share:

Efforts to end the war in Syria have been under intense global focus, and were the subject of a meeting between Vladimir Putin and Barack Obama on the sidelines of the UN general assembly in New York. Attention has been galvanised by the refugee crisis in Europe, continuing alarm over Islamic State, and Russia’s deployment of combat aircraft to Syria and its seizure of the initiative to take advantage of US and western disarray. The US, UK and others have subtly shifted positions or sent out mixed messages. Iran and Saudi Arabia, like Russia, are holding firm. It remains hard to see a route out of the bloodshed and deadlock.

Obama has made clear that he will work with Russia and Iran but not accept a return to the prewar status quo; that the fight against Isis will go on; and that there must be a “managed transition” in Damascus. John Kerry has signalled that Bashar al-Assad could be part of that – an apparent dilution of Washington’s previous demand that “Assad must go”. US efforts to arm moderate Syrian rebelshave failed dismally. Moscow’s more assertive stance makes it harder than before for the US to impose a no-fly zone over northern Syria – even if it were so inclined.

Putin has increased military support for Assad and signalled that he may do more. It would be an “enormous mistake” not to cooperate with Assad to fight Isis, he has said. Yet as well as planning to take on the jihadis, the Russians are stepping up overall backing for the Syrian president. Putin refers to the need to “safeguard” Syrian state structures, and the “rational” opposition, which does not include armed rebel groups. Moscow backs an international “contact group”to handle Syria – bringing in Iran and Saudi Arabia but excluding the UK and France. The UN also likes this idea.

Iran has been solid in its support for the Syrian regime, like Russia rejecting any suggestion that Assad be forced to step down. Its military and political influence in Damascus is stronger than any other country, combined with the combat role played by its Lebanese ally Hezbollah. Iran’s president, Hassan Rouhani, said Tehran was willing to work with others in Syria but only if their priority was to fight terrorism, not change the regime. Tehran was excluded from the two Geneva conferences on Syria. US reservations about working with Iran, outside the agreed framework of July’s landmark nuclear agreement, remain strong.

In recent weeks there was excitement in diplomatic circles as Saudi leaders held high-level talks about Syria with Russia and Iran. Publicly, however, Riyadh remains committed to backing the Islamist rebels fighting to overthrow Assad, and insists he must go. Its position is shared by its Gulf neighbour Qatar. Interestingly, Putin spoke to King Salman about finding a solution to the Syria crisis on Saturday.

The Turkish president, Recep Tayyip Erdoğan, suggested for the first time last week that Assad could play a role in a political transition – a formulation akin to the emerging US position. But he also said that it was impossible for Syrians to “accept a dictator who has led to the deaths of up to 350,000 people”. Erdoğan had previously insisted that Assad must surrender power. Turkey is an important supporter of Islamist rebels but is giving priority to fighting Kurds.

Earlier this month the UK signalled that Assad would not have to step down at once – specifying a six-month period in which he could remain in office. David Cameron repeated the idea but also insisted Assad must face justice for war crimes – a position that appears to reflect confusion in Whitehall, or a transition between changing stances. Britain is part of the anti-Isis coalition in Iraq and may extend airstrikes to Syria. It has also been a significant backer of the moderate Syrian opposition, though officials privately acknowledge its weakness on the ground.

France remains more hawkish on Syria than any other EU country, opposing any role for Assad in a transitional period. “Assad is the source of the problem,” François Hollande, the French president, has said. “He cannot be part of the solution.” The EU foreign policy chief, Federica Mogherini, holds similar views. The German chancellor, Angela Merkel – her country taking in a large proportion of Syrian refugees – has said talks on the future of Syria must include Assad. Other EU member states – Austria and Spain – have been more explicit about the need for security cooperation and dialogue with the Syrian president, who they argue is best placed to fight Isis.

Binyamin Netanyahu’s government addresses the Syrian war through the narrow prism of Israel’s national security interests, focusing on Hezbollah in Lebanon. Netanyahu and Israeli military chiefs last week held talks with Putin to ensure Russian aircraft do not conflict with Israel when it takes action in Syrian airspace.Israel has discreetly backed anti-Assad rebel groups operating close to the occupied Golan Heights and perhaps in the southern Druze region.

The unbending position of the government in Damascus is that it is fighting terrorists supported by Arab states, Turkey and western countries. Talk of peaceful demonstrations in 2011 is dismissed as a lie. Assad was re-elected in 2014 and has said only Syrians have the right to say how long he should remain in power. He has argued that the Syrian army is the force best placed to fight Isis as well as the al-Qaida-linked Jabhat al-Nusra and other Islamists. Assad has deniedusing barrel bombs against civilian areas or the banned chemical weapons that killed 1,400 people in August 2013. The government currently controls less than 25% of the country.

Syrian rebel groups of all stripes are alarmed by apparent moves towards the possible rehabilitation of Assad by his erstwhile opponents. The president of the western-backed Syrian National Coalition, Khaled al-Khoja, has noted that regime aerial bombardment, not Isis, is the main cause of the refugee exodus, and repeated the demand for a no-fly zone to prevent “another Rwanda”. The leader of the powerful Islamist Ahrar al-Sham rebel group has vowed to defeat Russian or Iranian intervention. Nothing suggests that the armed opposition is ready to stop fighting.