U.S. to donate equipment worth $59 mil. for Lebanese army 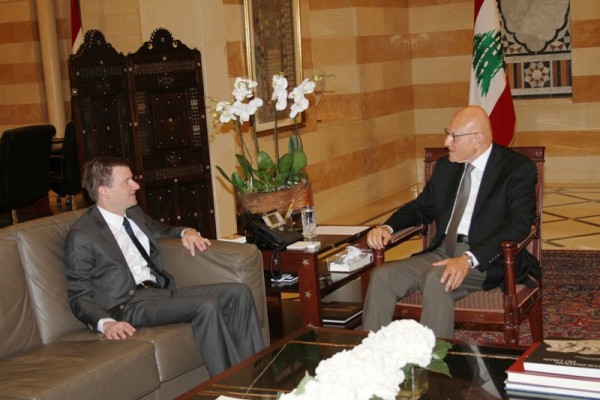 U.S. Ambassador to Lebanon David Hale  announced Wednesday  additional funds for the military and expressed  his country’s ongoing support for the Lebanese army,

Following a  meeting Prime Minister Tammam Salam at the Grand Serail he said : “I am very pleased to announce today that my government is donating  an additional $59 million  worth of  border security equipment for the army.”

“In addition, this week America received the latest, substantial transfer of funds from Saudi Arabia to purchase more U.S. equipment to help the Lebanese army,” he continued.

“These funds, combined with U.S. funding, will assist the Lebanese army to develop further a precision air force strike capability; we will announce the exact details as soon as they become available ” .

“This latest transfer and project are yet another demonstration of the strong and effective partnership among Lebanon, America, and Saudi Arabia to improve the Lebanese army’s capability to defend Lebanon’s borders and people,” Hale stressed

“Whether through political support, military aid, or humanitarian assistance, America will stand by Lebanon,” declared the ambassador.

“America’s commitment to Lebanese stability  should only be judged by our actions . Those actions include an American investment of more than $1.3 billion in security assistance for Lebanon in the past 10 years,” he added.

“The U.S. has provided nearly $1 billion in humanitarian assistance to host communities and Syrian refugees in Lebanon since the tragic conflict in Syria began and our bilateral development assistance for the last decade will also exceed one billion dollars, to help income generating opportunities, education, and provision of services such as water,” Hale remarked.

“But when it comes to stability, there is no amount of foreign assistance or goodwill that can substitute for the stability that comes from good governance. That can only come from within. I know Lebanon’s leaders are working to reactivate a functioning cabinet and to resume dialogue on the deeper issues,” said the ambassador.

“We welcome any such effort, and earlier this month we joined other members of the U.N. Security Council in reiterating that now is the time for parliament to meet and elect a president as soon as possible and to schedule parliamentary elections,” he stressed.

“We support these universal rights, and urge adherence to these responsibilities across the world. America supports these values here in Lebanon and the principle of civil society’s right to voice its views and frustrations, as does the Prime Minister. But the United States is in no way involved, directly or indirectly, in the civil society demonstrations, nor do we condone violence or the destruction of property,” Hale emphasized.

Commenting on Salam’s upcoming trip to the UN in New York he said :

“We very much look forward to the Prime Minister’s trip to New York and the opportunity to discuss with him ways the international community can be of further support for Lebanon and our shared goals of stability, security, and good governance,” he concluded.