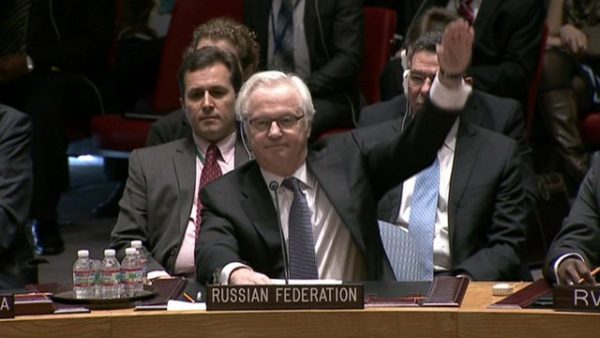 In this May 22, 2014, file photo, Russia’s U.N. Ambassador Vitaly Churkin raises his hand against a U.N. Security Council vote to refer the Syrian crisis to the International Criminal Court for investigation of possible war crimes. The resolution was vetoed with Russia and China, two of the council’s permanent members, voting against. The worsening war in Syria, allegations of child sexual abuse by U.N. peacekeepers and the mishandling of the Ebola epidemic cast a spotlight on the inadequacies of the United Nations in a globalized world, operating with a power structure that hasn’t changed since 1945. (AP Photo/Bebeto Matthews, File)
Share:

The worsening war in Syria, allegations of child sexual abuse by U.N. peacekeepers and the mishandling of the Ebola epidemic cast a spotlight on the inadequacies of the United Nations in a globalized world, operating with a power structure that hasn’t changed since 1945.

With age, the organization has grown bloated, say many who know it well. It is also underfunded and overwhelmed by the tasks it faces.

The world body is trying to deal with almost 60 million global refugees, displaced people and asylum seekers — the greatest number since World War II. It is seeking to provide emergency supplies to keep alive 100 million people but has received less than 30 percent of the $20 billion it needs this year.

Beyond Syria, where more than 250,000 people have been killed since 2011, conflicts escalate from Yemen and Iraq to South Sudan and Mali, forcing tens of thousands to flee hoping for a better life in Europe.

As it celebrates its 70th anniversary this year, the U.N. is hobbled by bureaucracy, politics and an inability among its five most powerful members to agree on much, including how to end Syria’s conflict.

Its problems were spotlighted in a series of reports on the U.N. health agency’s performance in last year’s Ebola epidemic that blamed incompetent leadership, political considerations and economic concerns for the delay in declaring the outbreak an international health emergency — the equivalent of an SOS signal.

Documents and conference call recordings recently obtained by The Associated Press show that even after the alarm was raised, the World Health Organization and others struggled to respond decisively.

Secretary-General Ban Ki-moon told a news conference last week that he is conscious of criticism about the U.N.’s effectiveness, accountability, transparency and even its relevance.

Were there no United Nations, however, where countries could sit down to discuss the major issues of the day, “I’m afraid to tell you that the world might have been much bloodier, much more tragic,” Ban said.

The paralysis shows in the debate over what the U.N. should be. Nearly every nation agrees that the 15-member Security Council — the U.N.’s most powerful body — must better address threats to international peace and security. Yet every reform proposal over several decades has been rejected. National interests and regional rivalries trumped the common good.

“Those who wield the power don’t want to lose the power, and they don’t want to share it,” said Patricia Lewis, a nuclear physicist who led the United Nations Institute for Disarmament Research and criticized the U.N.’s failure to modernize.

“If you can imagine any big multinational corporation keeping its structures the same as in 1945, it would have been destroyed by now in the marketplace,” said Lewis, who is now research director on international security at Chatham House, a London think tank.

The council’s five permanent members who can cast vetoes — the U.S., Russia, China, Britain and France — ultimately call the shots. The U.S. and Russia use their vetoes most often, blocking each other especially on Mideast conflicts.

One result is that Russia, a close ally of Syria’s government, has stopped all Western resolutions to pressure President Bashar Assad to end the Syrian war. Despite intensive efforts, the U.N. has also failed to start negotiations toward peace. It did unite to push Syria to rid itself of chemical weapons. But the government since has been accused of using chlorine in chemical attacks. Questions remain about hidden chemical caches.

Looking back at the past seven decades, Secretary-General Ban said most important global decisions have been made at the United Nations, and “most importantly, decolonization has brought so many countries to an independent and free society.”

The U.N. has had some success in its primary mission “to save succeeding generations from the scourge of war.”

It has helped prevent and end some conflicts, and more than 120,000 U.N. peacekeepers now are deployed in 16 hotspots.

But the U.N.’s reputation was tarnished in the past year by allegations that peacekeepers charged with protecting civilians sexually abused women, girls and children, notably in the Central African Republic.

The U.N. human rights office also was embarrassed by revelations this year that its top officials let multiple child sexual abuse allegations against French troops in Central African Republic linger for several months, assuming that France would act, even as French authorities pressed the U.N. for more details.

But the U.N. is often indispensable in helping people caught in conflict and trapped in poverty.

It reached 80 million people in 82 countries with food in 2014. It is responding to an unprecedented four simultaneous, top-level humanitarian crises: Iraq, Syria, South Sudan and Yemen. It procured 2.71 billion doses of vaccine for 100 countries last year, enough for 40 per cent of the world’s children.

U.N. development goals adopted in 2000 helped lift more than one billion people out of extreme poverty over the last 15 years, gave more than 2.6 billion people access to safer water, and enabled more girls to attend school than ever before.

The United Nations has also led the campaign to combat climate change and became a major employer in Gaza.

World leaders are holding a three-day summit starting Friday to adopt 17 new goals, with 169 targets, to eradicate poverty, fight inequality and combat climate change over the next 15 years.

Stephane Dujarric, spokesman for the secretary-general, argues that the U.N. has adapted since its founding in many areas such as collective security, health and human rights.

Ban “has been very much focused on working with member states to make the system more flexible and even more responsive to those needs,” he said.

But inefficiency, inaction and sometimes paralysis extend through a sprawling U.N. system of 15 autonomous agencies such as the World Health Organization, 11 other funds such as the World Food Program and numerous commissions and bodies. In many U.N. forums, decisions are hard to reach because they must be unanimous, and actions often are watered down.

The U.N. General Assembly is a truly global body with all countries represented, but its resolutions are not legally binding. Only the Security Council can authorize military action and impose sanctions. Its resolutions are binding.

The secretary-general is the U.N.’s chief administrative officer, elected by the assembly with approval from the Security Council. The assembly just passed a resolution that will allow member states to see resumes and interview candidates for the first time, but the five permanent members still essentially pick the winner.

Even though secretaries-general have an outsized role on the world’s stage, they have little independent power and 193 bosses.

“The secretary-general has not been a general for a long time,” former U.N. official Lewis told The Associated Press. “They’re not marshalling troops. They don’t have the freedom to act. Everything has to go through member states.”

The members often fall short in funding the U.N., with the world body owed about $4.9 billion for regular operations and peacekeeping.

U.N. peacekeeping operations have grown dramatically, but peacekeepers have been criticized for not doing enough to protect civilians.

Perhaps the highest-profile blunder in recent years was the likely introduction of cholera in Haiti by peacekeepers. The outbreak killed more than 8,500.

The U.N. does not have a standing army and relies on member states for peacekeepers. Its far-flung operations, mainly in Africa and the Mideast, recently got their first thorough review in 15 years.

Peacekeeping chief Herve Ladsous said that his department is under the most severe strain since the U.N.’s founding, pointing to the deaths of 124 peacekeepers in 2014 and 68 as of Aug. 25. Dozens remain held captive.

The only way the U.N. can take decisive action today is to go to the one place it is strong — the Security Council.

As a result, issues of all kinds are declared a threat to international peace and security, and “that’s the wrong lens really to look at diseases and many other global ills,” said Columbia University Professor Michael Doyle, a former U.N. special adviser for policy planning.

The U.N. also regularly is criticized for being an organization of words, not action.

“I get to live a daily talkathon up in New York,” U.S. Ambassador Samantha Power told the Center for American Progress in Washington last year.

Without the United Nations, she said, “you would definitely build it, because you want a venue to come together. And even those countries with whom we are estranged or not cooperating in visible ways, it’s a channel for communication so you don’t have misunderstanding.”

The question remains: can the U.N. change?

The U.N. overhauled its machinery to fight corruption after revelations in 2005 that more than 2,200 companies from some 40 countries had colluded with Iraqi dictator Saddam Hussein’s regime to bilk $1.8 billion from a U.N.-administered oil-for-food program that helped Iraqis cope with sanctions.

A U.N. anti-corruption task force established in 2006 uncovered more than $600 million in internal corruption schemes around the world. But the U.N. shut it down in 2008 as some countries balked.

Reform will always be a struggle because so many governments see the U.N. as a “spoils system” offering jobs for politically connected citizens, said Stewart Patrick, who directs the Council on Foreign Relations program on international institutions and global governance.

“It may take something along the lines of an existential crisis or something as horrific as nuclear use or dramatic deterioration in the world’s climate,” Patrick said, “with potentially catastrophic cascading effects.”