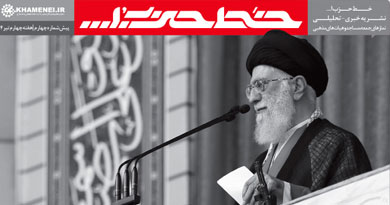 As Iran and world powers reached their nuclear agreement in Vienna, the website of supreme leader Ayatollah Ali Khamenei announced a new publication, the Line of Hezbollah, which it said would “allow the revolutionary community to benefit directly from the ideas and declarations of the supreme leader on…current political, social, and economic events”.

So far there have been 12 nine editions of the Line of Hezbollah, which differs from www.khamenei.ie in offering analyses of the leader’s speeches and articles rather than simply presenting them. And if Khamenei’s website is aimed at all Iranians as well as the foreign media, the Line of Hezbollah is directed squarely at the leader’s committed supporters, sometimes known as “Hezbollahis” and often members of the volunteer Basij militia.

This is the first time such a publication has appeared in the 26 years Khamenei has been leader. There is no coincidence between its emergence and the nuclear agreement. Some fundamentalists have expressed concern over a possible wider thaw in relations with the United States, and Khamenei’s strategy appears to be to mollify their worries by emphasising he will not allow undue concessions.

“The Rouhani government’s agreement with the west would not have been possible without Khamenei’s permission,” a member of the Islamic Iran Participation Front, the reformist party suspended since 2009, told Tehran Bureau. “Still, it appears that he is using this new publication to elucidate his positions and give his supporters some peace of mind that his approach to diplomatic, domestic and cultural issues will not soften in the aftermath of this deal.”

The first issue explained leader’s apparent lack of comment following the announcement of the nuclear deal in Vienna: “Some expected the leader to explicitly express his support or disapproval of the development, whereas in fact the legal and workable path of this deal has yet to be made clear… The agreement must be completely assessed and the kinks must be ‘hammered out’, so to speak, so as to preclude any possible abuses or cheating on behalf of the other parties …

‘Key word’ will signal a critical word or phrase uttered by Ayatollah Khamenei, keeping diehard followers on message
“Imam [Ruhollah] Khomeini [leader of the 1979 Revolution] and Ayatollah Khamenei have always favoured legal processes and benefited from collective wisdom on matters of national importance…the leader’s record of behaviour in this regard shows that, in this instance, it was correct neither to be starry-eyed nor to declare the death of the Islamic Republic.”

In the sixth edition is a piece on a controversial film by Majid Majidi on the life of the prophet Muhammad, a reaction to comments by the British foreign secretary on relations between Iran and Israel, and an exposition of Khamenei’s views on the need for Iranians to have more children.

A column headlined “Israel will disappear” refutes Philip Hammond’s remark that Iran’s position on Israel had “changed a little”. It quotes extensively from Khamenei’s speeches since 1990: “They have brought evil people from all around the world and fabricated a nation called Israel…the Zionist regime is an imposed regime, brought about by force…the struggle against Zionism and its supporters is one of the bases of the Islamic Republic of Iran’s political strategy.”

A reformist journalist told Tehran Bureau she had no doubt the Line of Hezbollah should be considered Khamenei’s official publication: “He’s been the supreme leader for 26 years, and this is the first time he’s allowed an analytical publication like this to be released with his name attached to it.”

The Line of Hezbollah also marks a shift in the status of the conservative newspaper Kayhan, sometimes considered Khamenei’s unofficial mouthpiece. Editor Hossein Shariatmadari, who is appointed by the leader, has launched fierce attacks against the Rouhani administration and the Iranian negotiating team, allegedly for making concessions to the west. But with the emergence of the Line of Hezbollah, it will be far harder for any publication, including Kayhan, to convey an impression it speaks for the leader.

A Basij member at Tehran’s Science and Technology University told Tehran Bureau he expected great interest among Basij students: “I imagine that with the start of the new [academic] year, the Line of Hezbollah will break previous distribution records. In any case the publication has the ayatollah’s stamp on it, and in a way he is responding to a demand from his young supporters to have a publication endorsed by him.”

Qasem, a Basij member in the North Afsariyeh district of south Tehran, explained how Basij bases located in mosques were spreading the word: “We’ll print copies of the Line of Hezbollah as soon as it’s released, and anyone who comes to the mosque for prayers will receive a copy if they wish. We’ll make it available in stores and during night prayers as well. Our Basiji sisters will also take it to distribute to women.”

Qasem said the Line of Hezbollah would allow Khamenei’s supporters unfiltered access to his views: “Basijis love Ayatollah Khamenei. Whenever he appears at Friday prayers everyone goes to show their support. We watch his speeches on television. Having said this, many of us are busy working and we don’t have time to hear the entirety of his speeches and remarks on the radio or television; we have to gather it all from websites and newspapers, and these sources have their own biases…This publication will be like a light in the darkness; it will show us the proper path.”

In north Tehran the reaction is different. A director at the Imam Sajjad Mosque in Niavaran told Tehran Bureau that distribution of the Line of Hezbollah was low. “It’s enough for us that people show up to pray and then go home,” he said. “It doesn’t really work when we try to politicise the atmosphere here.”

The Line of Hezbollah also has an active presence on social media, particularly Instagram, where it had 8,152 followers after just 31 posts in six weeks. The small number of comments – usually between ten and 20 for each post – suggests it has yet to become a popular forum for discussion.

In addition to appearing on Khamenei’s site, the Line of Hezbollah is featured on most fundamentalist and moderate news services, websites, and newspapers, including Bulletin News, Mashreq News, Fars News, Mehr News, Keyhan, Vatan-e Emruz. While the reformist newspaper Shargh did report the launch, other reformist papers, such as Etemad and Qanoon, have shown little interest.