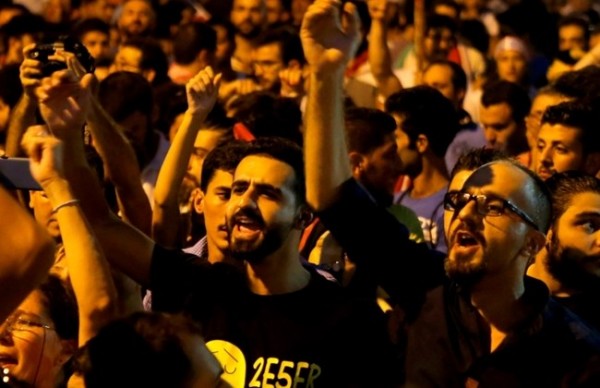 Civil society protesters marched Sunday from  from the eastern Beirut suburb of Burj Hammoud   to central Beirut’s Nejmeh Square, passing by the Sukleen waste management firm and Electricité du Liban’s headquarters, in  a largely peaceful demonstration against Lebanon’s political elite that was marred by an assault by young men claiming to be supporters of Speaker Nabih Berri.

The banners also reflected the protest movement’s demands regarding the crises of waste management, electricity, salaries and other social issues.

Berri supporters  confronted protesters who erected a banner with the faces of the speaker, Future Movement leader Saad Hariri and Progressive Socialist Party chief Walid Jumblatt that accused them of corruption and theft.

Berri supporters beat one of the protesters with the microphone he was using and removed his t-shirt. Minutes later a group of them struck at the crowd of protesters with their fists. Police initially did not intervene, but later said in a statement that one man was detained over the  clash

Later in the evening  a number of people were taken  to hospitals after being stabbed and punched by Berri supporters, who threatened journalists with knives and attacked those who tried to film or take photographs.

Among those wounded and transferred to the hospital was reporter Osama al-Kadiri.

The demonstration, called for by You Stink and supported by a number of the movement’s offshoot groups, had planned to end  the protest with a gathering inside Downtown Beirut’s Nejmeh Square, where the Parliament is located.

However, heavy security deployment at all  the square’s entrances prevented crowds from reaching it. Dozens of riot police formed a line at the main entrance to the square as protesters  held their hands in the air  shouting”Peaceful, peaceful,”    to signify that their demonstration was peaceful.

The You Stink  movement began as a reaction to the garbage crisis but then expanded to become a nation-wide campaign against corruption, sectarianism and the ruling political class.