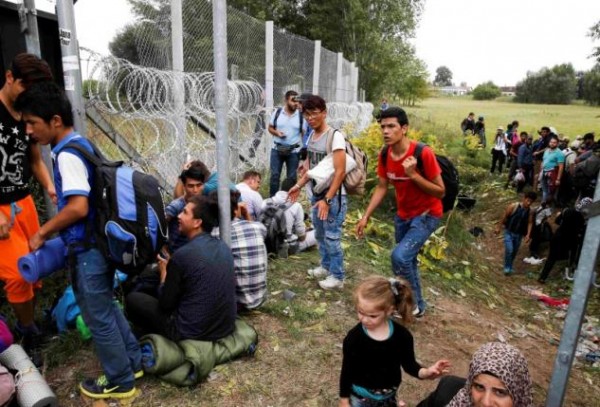 Hungary’s right-wing government shut the main land route for migrants into the EU on Tuesday, taking matters into its own hands to halt Europe’s influx of refugees.

Berlin called for EU financial penalties against countries that refused to accommodate their share of migrants. A Czech official said such threats were empty but nonetheless “damaging”. Slovakia said they would bring the “end of the EU”.

Under new rules that took effect from midnight, Hungary said anyone seeking asylum at its border with Serbia, the EU’s external frontier, would automatically be turned back, and anyone trying to sneak through would face jail.

In scenes with echoes of the Cold War, families with small children sat in fields beneath the former communist country’s new 3.5-metre (10 foot) high fence, which runs almost the length of the border, topped with razor wire.

“Strike. No food. No water. Open this border,” a woman had written on a child’s dress that she held above her head.

Migrants that did try to apply for asylum in a transit zone of metal containers in no-man’s land were swiftly denied. Macruf Suhufi Abdi Omar, a Somali man, told Reuters that he had been refused asylum barely an hour after he gave his fingerprints.

Hungarian officials said they had denied 16 asylum claims at the frontier within hours and were processing 32 more. Police had arrested 174 people for trying to sneak across the border.

Prime Minister Viktor Orban, one of the continent’s loudest opponents of mass immigration, says he is acting to save Europe’s “Christian values” by blocking the main overland route used by mainly Muslim refugees, who travel through the Balkans and cross his country mainly to reach Germany or Sweden.

Amnesty International said Hungary was “showing the ugly face of Europe’s shambolic response” to a crisis that has seen hundreds of thousands of people arriving at the EU’s southern and eastern edges and making their way to the richer countries further north and west.

The greatest migration to Western Europe since World War Two has also created an institutional crisis for the 28-member EU, with one of the bloc’s signature achievements, its Schengen system of border-free travel across much of the continent, unraveling this week under the strain.

Germany and other relatively open countries say Europe has a moral obligation to accept refugees, and other EU states must be required to do their part.

Under its new rules, Hungary said it had determined Serbia was “safe”, and therefore it could automatically deny asylum claims at the border.

“If someone is a refugee, we will ask them whether they have submitted an asylum request in Serbia. If they had not done so, given that Serbia is a safe country, they will be rejected,” Orban was quoted as telling private broadcaster TV2 on Monday.

“We will start a new era,” government spokesman Zoltan Kovacs said shortly after midnight on the border. “We will stop the inflow of illegal migrants over our green borders.”

Orban says that by reinforcing the EU’s external border his government is merely enforcing EU rules, and that no countries are duty-bound to take in refugees that pass through safe states. Critics at home and in European neighbors say some of his rhetoric has crossed a line into alarmism and xenophobia.

Long queues formed in no-man’s land at metal containers built into the fence, where migrants were expected to register, though only a handful were seen entering. They had spent the night in the open, given tents, food and water by aid workers.

WE HAVE LOST EVERYTHING

“I don’t know what I will do,” said 40-year-old Riad from Aleppo in Syria. “I will wait to see. We have lost everything to reach this point.”

Hungary blames Germany for accelerating the flow of migrants and tearing up European rules by announcing in August it would take in Syrian refugees regardless of where they enter the EU. Germany has prepared for as many as 800,000 asylum seekers this year, and some senior officials now say even that figure may be an underestimate.

More than 100,000 asylum seekers arrived in Germany in August, and nearly as many have already arrived by train in the first two weeks of this month. More than 460,000 migrants have crossed the Mediterranean this year, more than double the figure from last year.

With thousands of migrants converging on Munich, Germany’s government abruptly reintroduced border controls with other Schengen states on Sunday. Austria, Slovakia and the Netherlands swiftly said they would follow suit. Other countries say they were studying whether to do so as well.

The Schengen system eliminated border controls between 26 European countries, leaving no mechanism to enforce rules which ban travel by undocumented migrants within the bloc. Countries are permitted to reimpose border checks in an emergency, but have never before done so on the scale unfolding this week.

Berlin has become exasperated at the reluctance of neighbors to take refugees, especially to the east. Interior Minister Thomas de Maiziere said on Tuesday the EU should impose financial penalties on countries that reject quotas.

“So I think we must talk about ways of exerting pressure,” he told ZDF television, adding that some of the countries that opposed quotas were beneficiaries of EU funds.

Tomas Prouza, the Czech State Secretary for the EU, said the apparent German threat to cut off EU funds was “empty but very damaging to all”. Slovak Prime Minister Robert Fico said his country would never agree to quotas, and threats of financial retaliation would lead to “the end of the EU”.

Chancellor Angela Merkel later appealed for unity and distanced herself from the threats: “I think we need to establish a European spirit again,” she told a news conference. “I don’t think threats are the right way to achieve agreement.”

At least 200,000 migrants have crossed into Hungary this year. More than 9,000 entered on Monday, setting a single-day record as they rushed to cross the frontier before Orban’s government shut it.

“We’re on the street now,” said Mouz, a 22-year-old Syrian, who slept on the border. Asked if he might consider another route, he replied: “I don’t know. I’m from Syria. I cannot go back.”

Serbia fears becoming a bottleneck. The government says it is readying more temporary accommodation but will not accept anyone turned back from Hungary.

“That’s no longer our responsibility,” Aleksandar Vulin, the minister in charge of policy on migrants, told the Tanjug state news agency. “They are on Hungarian territory and I expect the Hungarian state to behave accordingly towards them.”

With Hungary’s border with Serbia closed, migrants could seek other land routes into the Schengen zone, including over Romania or Croatia, EU members outside Schengen. Hungary said it would extend its border fence to its frontier with Romania if necessary, a proposal which Romania denounced.