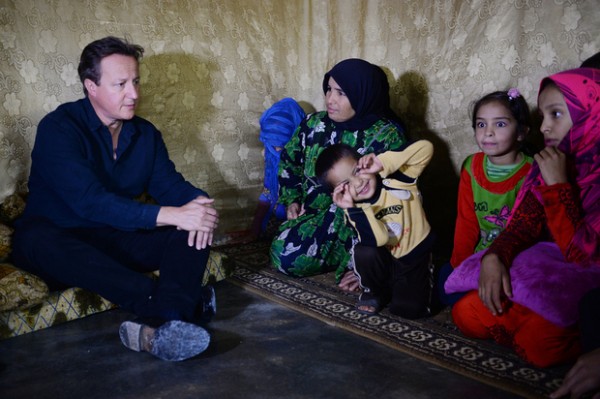 Britain’s Prime Minister David Cameron (L) meets Syrian refugee families at a tented settlement camp in the Bekaa Valley on the Lebanese-Syrian border on September 14, 2015. Cameron arrived in Beirut on September 14 for a one-day visit to discuss the Syrian refugee crisis gripping the Middle East and Europe, a Lebanese government source said. Cameron was to visit a refugee camp in the Bekaa valley in eastern Lebanon, the source said. The country hosts more than 1.1 million Syrian refugees. is in the region to see conditons and meet those who have fled their homes in Syria. AFP PHOTO / POOL / STEFAN ROUSSEAU
Share:
David Cameron has visited a Lebanese refugee camp amid growing pressure on the UK to do more to help alleviate Europe’s refugee crisis.

The UK has agreed to take in 20,000 Syrian refugees in the next five years from camps in the region but critics say Britain should take in more people.

The PM said of the visit: “I wanted to come here to see for myself and to hear for myself stories of refugees.”

It comes as Europe sees a huge influx of people, many from the Middle East.

Hundreds of thousands of refugees have been making the perilous journey across the Mediterranean – most fleeing conflict in Syria but large numbers also fleeing violence and poverty in Afghanistan, Eritrea and Kosovo.

The prime minister’s visit to Lebanon comes as:

The Dalai Lama, on a nine-day visit to Britain, says the UK’s pledge to take in more refugees is “wonderful”

Former foreign secretary David Miliband, now CEO of the International Rescue Committee, says the UK’s pledge to take in 4,000 Syrian refugees per year was not enough

European ministers, meeting in Brussels, are due to vote on a plan to redistribute an initial 40,000 asylum seekers through mandatory quotas. The scheme aims to redistribute a total of 160,000 people across 23 EU states.

Under EU law the UK, Ireland and Denmark are exempt from the quota plan.

Home Secretary Theresa May, arriving at the summit, again stressed the UK would not take part, instead calling for action to set up registration centres in Europe and centres in “transit” countries which would distinguish between asylum seekers and migrants.

The vast majority of Syrian refugees have fled to neighbouring countries such as Turkey, Jordan and Lebanon, with 1.1 million Syrian refugees registered in Lebanon alone.

Mr Cameron, on his first visit to Lebanon as prime minister, said the UK’s focus was on how to help refugees there and in Jordan “to make sure we discourage people from making this dangerous journey to Europe”.

He met Lebanon prime minister Tammam Salam, later saying the UK was “determined to do all we can” to strengthen security there.

Mr Cameron said training had already been provided to more than 5,000 Lebanese soldiers and the UK had helped to build a series of watchtowers on the border with Syria.

Lebanon is to receive £29m of the £100m in aid recently pledged by Mr Cameron to help those who have been displaced by the conflict in Syria and surrounding countries. It brings the UK’s total contribution over three years to more than £1bn.

It will pay for food packages for thousands of refugees, as well as clean water, blankets, stoves, mattresses, counselling support and play areas for children.

The prime minister met families living in one of the 1,500 refugee camps in the Bekaa Valley, which houses 525 Syrians in 90 tents and is less than a mile from the Syrian border.

He was invited into the tent of a mother of 10, who told him how she struggled to feed her family on reduced handouts of 13.50 US dollars (£8.75) a month.

Mr Cameron also visited the Sed el Boucrieh school in Beirut, which has tripled in size to 900 pupils due to the influx of Syrian refugees.

It is David Cameron’s first visit to Lebanon and he is here with a clear aim: to address the criticism that Britain is not doing enough to tackle Europe’s refugee crisis.

So he walked around a refugee camp in the Bekaa valley just one mile from the Syrian border to meet just some of the families benefitting from British aid.

He also visited a school at heart of Beirut supported by British cash where Syrian and Lebanese study alongside each other.

The PM’s argument is that this is the help Syrian refugees need rather than any encouragement to risk the dangerous journey to Europe.

So to a nation now familiar with television pictures of Syrian refugees fleeing across Europe, Mr Cameron wants to remind people of where the vast majority are, namely in Lebanon, Turkey, Jordan and Syria itself.