Snow is the secret ingredient for fine wine in Finalnd 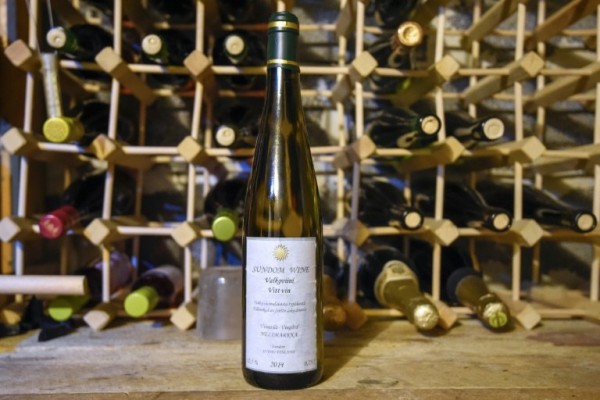 Snow, preferably a thick layer of it, is the recipe for successful winegrowing in western Finland, at what is believed to be the world’s northernmost winery.

Thanks to an insulating layer of snow, winter temperatures as low as -36 degrees Celsius (-32.8 degrees Fahrenheit) have not managed to freeze the Riesling, Merlot and Chardonnay vines of Finnish wine pioneer Kaarlo Nelimarkka, 74.

On the contrary, Nelimarkka is more concerned about the sun’s rays than the winter frost piercing his Sundom winery in the town of Vaasa, just 400 kilometres (250 miles) south of the Arctic Circle.

“The winter is not a problem. The biggest problems are too short summers and the strong spring sun which can make the vine shoot out sprouts even when the soil is still frozen,” the retired Vaasa town administrator tells AFP.

He can make up to 400 bottles of whites, reds and roses in a good year, combining the hardier grape varieties Madeleine Angevine, Gewurztraminer and Solaris to make his speciality, Sundom White.

He describes it as “luminous”, and Finnish wine enthusiast Hannu Hokka, a former expert at Finland’s state-owned alcohol monopoly Alko, said he was impressed by it.

“The taste was fine and well-balanced, to go with salads or crayfish. Without knowing better, I could have never guessed it was from a minor Finnish producer,” Hokka told AFP.

There are less than a handful of winegrowers in the country, none of whom earn a living from it. At one point, Nelimarkka had hoped to make a career of it — but European Union bureaucracy reared its head.

No matter how meticulously Nelimarkka makes his wine he is not allowed to call it ‘wine’ as Finland is not listed by Brussels as one of the official wine producing regions of the EU.

Because he can’t sell his product, Nelimarkka instead hosts groups who pay to visit his vineyard and who can enjoy wine tastings courtesy of the house.

“My wife ordered some tulip bulbs from the Netherlands back in 1975 and they also advertised vines. I ordered just one and it turned out to be Pinot Noir, which is one of the most difficult varieties to cultivate, so I had to learn,” he says.

He was bemused when the mailman delivered a bare stick — which he then found out was a cutting.

“For the first 20 years I read all the instruction books and did everything accordingly but I always failed,” the self-educated wine enthusiast recalls.

After decades of trial and error, Nelimarkka has devised his own methods to protect his vines from the cold.

He quickly abandoned the idea of growing medium-height trunks common in traditional wine producing regions, and began cutting his vines down to under 30 centimetres (one foot) for the winter.

He also piles heat-retaining stones under the vines to protect them from the humidity and cold, and covers them partly with white plastic tarpaulin for the winter.

In summer, the midnight sun comes to the rescue, offering up to 20 hours of daylight per day at Sundom’s latitude.

Nelimarkka calculated that between March and September, there are an average of 30 days more daylight at his vineyard than what winegrowers around the Sicilian city of Palermo in southern Italy enjoy.

But this summer, Mother Nature has offered up another challenge for the resourceful viticulturist to overcome: an excess of rain.

While much of southern Europe had to contend with sweltering heatwaves, Finnish meteorologists recorded June and July as the coldest summer months in 50 years, with rainfall almost every day.

If an unusually warm end of the season was to save the harvest, he could be picking his grapes — he picks all the grapes himself — in early October, a few weeks later than usual.

He then ferments his wine in big glass jugs, forgoing traditional oak casks because he found that process too difficult.

When Nelimarkka first took up winemaking four decades ago, wine was a foreign oddity for many in Finland, where beer and vodka were the drinks of choice and where the state still holds a monopoly on retail alcohol sales.

While beer consumption has slightly declined, nearly 50 percent of all alcohol drunk in Finland is still beer. Meanwhile, the share of wine has risen from only 11 percent in 1995 to 19 percent in 2014.