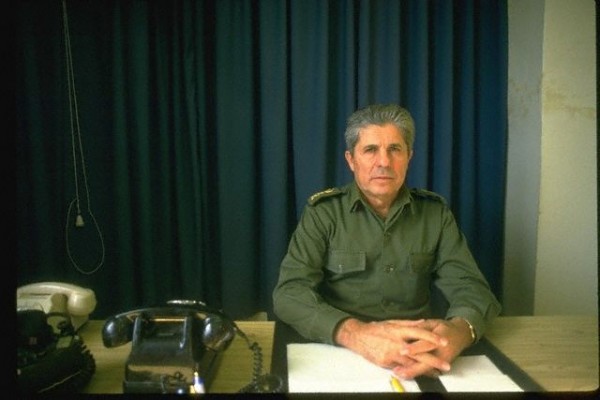 Lahad headed the pro-Israel militia the South Lebanon Army (SLA) , which claimed allegiance to Israel from 1984 until the Israeli withdrawal from south Lebanon in May 2000. He took over the command of the SLA from its founder General Saad Hadad.

Hadad founded the pro-Israel militia with the aid and support of Israel after invasion of Lebanon in 1982 .

Lahad was born into a Christian Maronite family in the village of Al Qattara. He graduated from the Lebanese Military Academy in 1952.

He was a Lebanese Army (reserve officer) who carried a major general rank when he took over SLA leadership. He was close to Lebanese president, Camille Chamoun.

Lahad was condemned to death by Hezbollah following Israel’s occupation of southern Lebanon. Men were required to sign written pledges not to visit with Lahad or his people if they were traveling into southern Lebanon. His headquarters was known as Marja’uyun, which flew an Israeli flag flanked by two flags of Lebanon. Also in the compound was the Pat Robertson CBN broadcast center.

In n 1988,Souha Bechara, a 21 year old woman who was a member of the Lebanese Communist party, tried to assassinate Lahad. Bechara disguised herself as an aerobics instructor to visit with Lahad’s family. On November 17, 1988 while she was having tea with Lahad’s wife, he returned home. Bechara shot him twice in the chest. She was detained by his security team. Lahad spent eight weeks in the hospital and suffered health complications leaving his left arm paralyzed.

When Israel withdrew from southern Lebanon in 2000, Lahad was determined to carry on against Hezbollah. He pleaded for support from Israel,

“I need three things: 1 – I need Israel not to stop the money, keep the flow of money coming so I can keep paying my soldiers; 2- I need logistical support so the SLA will have adequate ammunition; 3- I need the border to remain open because I don’t have sophisticated hospitals in the South, and in this instance all my wounded should be transported to northern Israel to be treated. When I’ll have those three things, I can hold for 200 years. That’s all I need.”

Lahad never received the support he asked for , and the SLA collapsed following Israel’s withdrawal.

“Antoine was a proud Lebanese national, loyal to his homeland, Lebanon, and his heart was filled with love for it and its unique character, a love that moved him to take upon himself the enormous responsibility over the border area in south Lebanon,” his former SLA comrades said in a statement.

“He was a moral man gifted with courage and rare leadership abilities,” the SLA veterans said. “We will never forget you, dear commander.”

Lahad resettled in Tel Aviv, where he opened up a restaurant. A short time later, however, he departed for Paris. Lahad was tried in absentia as a traitor by Lebanese authorities and sentenced to life in prison.