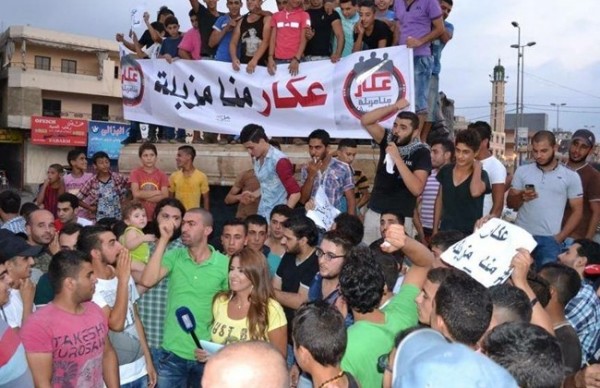 Dozens of northern Lebanon residents rallied Thursday against government plans to deal with Beirut’s mounting trash crisis by opening a new landfill in their region.

Those living near an old, closed landfill in the north also protested, rejecting government plans to temporarily reopen it to immediately get rid of hundreds of tons of trash that has piled in the streets of Beirut over the last seven weeks.

The pushback from residents and local officials outside Beirut is the latest in the near-daily protests against government inefficiency amid the trash crisis that have engulfed the Lebanese capital and further compounded anger against long-serving politicians who have dominated the country since the civil war ended in 1990.

Over the last month, the trash crisis ignited the largest Lebanese protests in years and emerged as a festering symbol of the government’s paralysis and failure to provide basic services. It was sparked after authorities closed Beirut’s main landfill on July 17 and failed to provide an alternative.

Activists capitalized on the issue to move beyond just the trash, rallying support around government corruption and demanding officials be held accountable for years of corruption. They also called for parliamentary elections, which were last held in Lebanon in 2009.

After an emergency session held late into Wednesday night as thousands of protesters rallied outside government offices in downtown Beirut, authorities announced they would start two new landfills, including one in the northern district of Akkar. They also said they will reopen the old landfill there for a week, to immediately get rid of tons of trash.

Lucien Bourjeili, an activist with the You Stink movement that started the Beirut street protests, said his group is studying the government proposal before deciding what to do next. But he said at first glance, the decisions did not appear environmentally friendly or sustainable, describing it as an attempt to get the protests to stop.

“They are just postponing the problem,” he said. “We lost trust in them.”

Paul Abi Rached, an environmentalist who has joined the protests, said the decisions appeared rushed. “They want to send all trash to the new landfills without any sorting … These are arbitrary dumps. It is the same problem as before.”

Protesters on Thursday in Akkar threatened to block garbage trucks from reaching their district. “Akkar will not be your dump,” said Zaher al-Kassar, a local official.

Another rally in Akkar was planned for Saturday. An activist, reading a statement, addressed government officials and said: “Put (the garbage) outside your own home.”