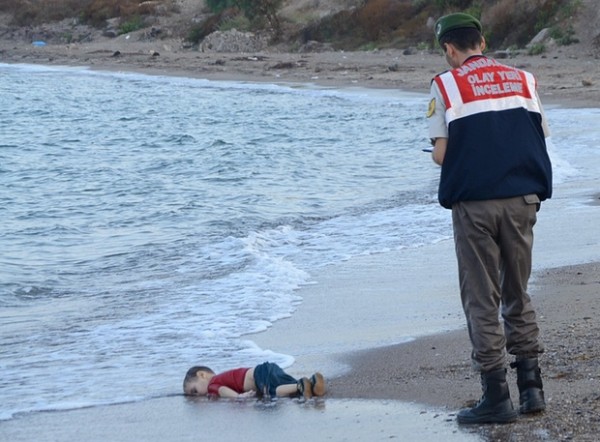 The young Syrian boy who drowned in a failed attempt to sail to the Greek island of Kos. Photograph: Reuters
Share:
By Ishaan Tharoor

The latest issue of Dabiq, the Islamic State’s English-language magazine, contains a conspicuous number of offensive provocations. It has a two-page photo spread celebrating the destruction of the 2,000-year-old Temple of Bel, the most famed structure in the ancient city of Palmyra — a world heritage site now under the control of the extremist organization. It also shows pictures of bound men moments before their execution, and young boys training to be jihadists.

But the worst image in this issue, the publication’s 11th edition, is one much of the world has already seen. The Islamic State ran the famous picture of Aylan Kurdi, the 3-year-old Syrian toddler whose lifeless body washed ashore on a Turkish beach. Aylan, as the world came to learn, drowned last week in the waters of the Aegean Sea after the flimsy rubber dinghy carrying him and his family sank. His death brought home the risks and horrors facing myriad other refugees now struggling to reach Europe.

But to the Islamic State, the refugees’ journey into “crusaders’ lands” is unforgivable. They ran the image of the drowned child under the headline “The Danger Of Abandoning Darul-Islam” — or the lands of Islam. The magazine went on to chastise Arab refugees making the perilous Mediterranean crossing.

After citing certain traditions of Islamic jurisprudence, the article scolded as follows:

Sadly, some Syrians and Libyans are willing to risk the lives and souls of those whom they are responsible to raise upon the Shari’ah — their children — sacrificing many of them during the dangerous trip to the lands of the war-waging crusaders ruled by laws of atheism and indecency.

It concludes that “voluntarily leaving [the lands of Islam] for [the lands of infidels] is a dangerous major sin, as it is… a gate toward one’s children and grandchildren abandoning Islam for Christianity, atheism or liberalism.”

This hardly seems like a deterrent to future refugees, who are fleeing both the ravages of the jihadists, as well as the regime the Islamic State claims it’s fighting. Aylan’s family were Kurds from the northern Syrian city of Kobane, the site of months of bitter warfare between the Islamic State and Syrian Kurdish militias. The Kurds triumphed, but the city was a ruin.

The Kurdi family, struggling to survive, hoped like thousands of others for a better life overseas. That dream ended in tragedy, and Aylan’s father, the only surviving member of the family, has returned to Kobane. In an interview with Newsweek, Abdullah Kurdi said that he will now stay by the graves of his wife and children — and that he will stand up to the Islamic State.

“I will stay and fight for Kobane, fight for the family I have left and for my people,” he said. “We need all the help we can get, and I hope that the world realizes how much we have suffered.”
WASHINGTON POST