“it is unacceptable to suspend governments and elections for months for the sake of one person.” He said during a press conference following a meeting with Patriarch Beshara Boutros in reference to MP Michel Aoun’s boycott of presidential election .

“What’s worse is that they are blackmailing us by threatening that they will block solutions for the garbage crisis if we don’t approve raising the retirement age of top military officers. This selfishness is being practiced under the excuse of Christian rights,” he added.

“Will the rights of Christians be restored through electing a president by a popular vote? If Aoun was elected president through Hezbollah’s votes, who would guarantee the scenario of the next election?” Gemayel wondered.

He lamented that “in the name of Christian rights, Christians are now living without a president or a state and among the piles of garbage.”

Earlier in the day, Aoun reiterated that the country’s political crisis can only be resolved through staging parliamentary polls under a proportional representation law or electing a new president by a “popular vote.”

“We want to return authority to the Lebanese people, the source of all authorities. We want to devise a proportional representation law, hold parliamentary elections and then elect a president,” said Aoun.

He noted that “all Lebanese want a proportional representation law,” pointing out that “the election of a president by a popular vote frees him of foreign pressures.”

According to observers proportional representation works out very well for Hezbollah and its allies but not for the March 14 allies , because the Iranian backed Shiite party does not allow any competition in the areas under its control.

“The (waste management) plan that has been proposed by (Agriculture) Minister (Akram) Shehayyeb is based on Phalange Party ‘s suggestions,” Gemayel said

“We will file a lawsuit tomorrow against all officials responsible for the eruption of the garbage crisis,” he pledged.

Hinting that Phalange Party ministers might resign from cabinet if the crisis persists, Gemayel added: “Our presence in the cabinet will become of no use if the government does not implement the plan it has devised for waste management or if it refrains from releasing funds to municipalities and removing garbage from the streets immediately.”

“We call on PM (Tammam) Salam to start implementing the waste management plan,” he went on to say.

Shehayyeb’s plan includes a short-term solution to remove accumulating garbage from Beirut and Mount Lebanon and a proposed long-term solution.

The core of the crisis, which erupted after the July 17 closure of the landfill serving Beirut and its surroundings, remains unaddressed.

Turning to the street protests that erupted in the wake of the garbage crisis and evolved into a broad-based mobilization against government impotence and corruption, Gemayel stressed that “change can only happen through state institutions.”

“The Phalange Party is willing to sacrifice its popularity for the sake of Lebanon and its institutions,” he said.

“In tomorrow’s dialogue session, we will fight the battle of preserving the Constitution and electing a new president,” Gemayel noted.

He also said that Phalange Party will propose “the election of a new president, the formation of a new government and organizing parliamentary elections within a month.”

Speaker Nabih Berri has invited Salam and the heads of parliamentary blocs to a national dialogue conference on Wednesday, noting that the presidential deadlock is the first item on the agenda.

The interlocutors are expected to discuss ways to end the vacuum at Baabda Palace, the resumption of the work of parliament and the cabinet, a new electoral draft-law, legislation allowing Lebanese expats to obtain the nationality, administrative decentralization and ways to support the army and the Internal Security Forces. 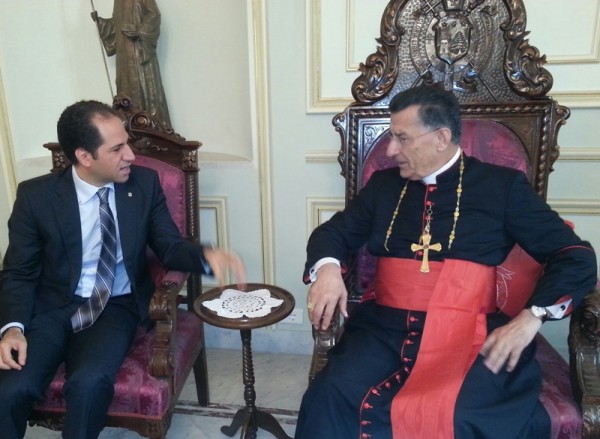