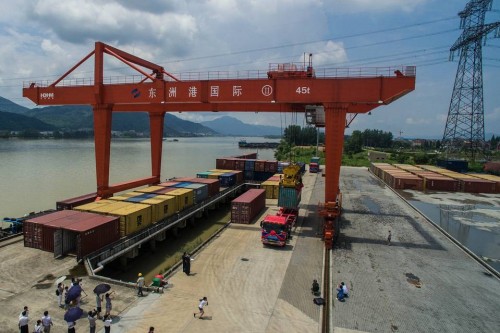 But the drop was slightly ahead of the median forecast of a 6.6 percent decline in dollar terms in a survey of economists by Bloomberg News, and an improvement from July’s 8.9 percent fall in yuan terms.

China is the world’s biggest trader in goods and its exports have been a major driver of its decades-long economic boom.

Authorities are now trying to rebalance the economy to one where domestic consumer demand is the main force for hopefully more sustainable growth, but the transition is not proving easy and global markets have been rocked by worries over slowing expansion.

“Exports to the US and the Association of South-East Asian Nations continued to grow but shipments to the EU and Japan declined,” Customs said in a statement on its website.

It was the 10th consecutive monthly decline in imports, and worse than the Bloomberg survey’s projection of a 7.9 percent decline in dollar terms.