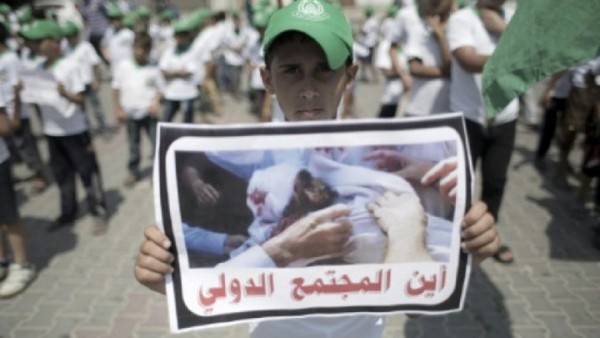 Said Khatib | A Palestinian boy holds a placard during a demonstration simulating a funeral in reaction to the death of 18-month-old Ali Saad Dawabsha, who was burned to death by suspected Jewish extremists, on August 1, 2015. His mother was buried in her village Monday hours after succumbing to wounds sustained in the attack, which also killed the child’s father
Share:

The mother of a Palestinian toddler killed in a West Bank firebomb attack was buried in her village Monday hours after succumbing to wounds sustained in the attack, which also killed the child’s father and is believed to have been carried out by Jewish extremists.

Thousands of Palestinians attended the funeral for Riham Dawabsheh, 27, and later about 100 threw rocks at Israeli soldiers nearby who responded with rubber bullets, the military said.

On July 31, assailants hurled firebombs into a bedroom of the family’s home in the West Bank village of Duma in a pre-dawn attack, and sprayed graffiti on the walls depicting a Jewish star of David and the word “revenge.”

The boy’s mother, Riham, ran out of the house and a neighbor said he covered her in a sheet to try to extinguish the flames. She died in an Israeli hospital early Monday following a recent deterioration in her health. Her 32-year-old husband Saad died of burn wounds last month.

The only family member to survive is the couple’s four-year-old son Ahmad, who is still undergoing treatment in an Israeli hospital for severe burns over most of his body. A relative, Amjad Dawabsheh, told Israeli Army Radio on Monday that the boy has not been told what happened to his parents and brother.

“How can we tell him, ‘Your father and mother and brother died?'” he said.

“If Israel is not stopped and held accountable, then Riham will not be the last victim of Israeli terror,” said Saeb Erekat, a top aide to Abbas, in a statement.

The attack, believed to have been committed by Jewish extremists, shocked Israelis and was widely condemned across the political spectrum.

Israeli Prime Minister Benjamin Netanyahu issued a statement Monday expressing his condolences and saying “security forces are doing their utmost to apprehend the assailants and bring them to justice.”

The attack prompted pledges by Israel’s government to get tougher on Jewish extremists in the West Bank — who have repeatedly attacked Palestinians and their property over the years.

But the United Nations envoy to the Middle East, Nickolay Mladenov, said he was “concerned by the lack of progress in identifying and prosecuting the perpetrators of this outrage.”

Still, Israeli authorities have not announced arrests or identified suspects in the July arson attack. Israel has imposed a gag order on publishing details of the investigation into the arson attack.

Israeli police meanwhile announced that two Israeli settler activists, an 18-year-old and a minor, were indicted on suspicion of setting fire to a Bedouin Arab tent in the West Bank last month to protest Israeli actions to round up Jewish extremists. No one was injured in the attack.