Most migrants in Balkan claim to be Syrian, have no documents to prove it 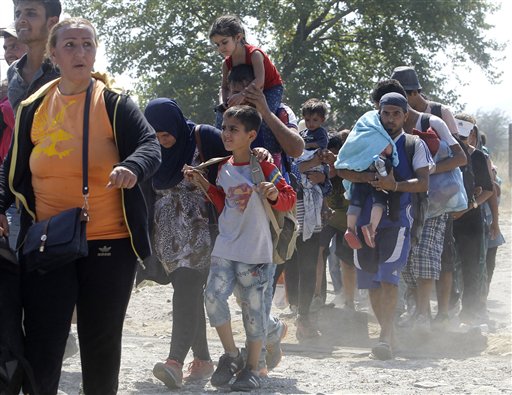 A Pakistani identity card in the bushes, a Bangladeshi one in a cornfield. A torn Iraqi driver’s license bearing the photo of a man with a Saddam-style mustache, another one with a scarfed woman displaying a shy smile.

Documents scattered only meters from Serbia’s border with Hungary provide evidence that many of the migrants flooding Europe to escape war or poverty are scrapping their true nationalities and likely assuming new ones, just as they enter the European Union.

Many of those travelers believe that using a fake document — or having none at all — gives them a better of chance of receiving asylum in Germany and other western European states. That’s because the surest route to asylum is to be a refugee from war and not an economic migrant fleeing poverty. That fact has led to a huge influx of people claiming to be Syrian.

Serbian border police say that 90 percent of those arriving from Macedonia, some 3,000 a day, claim they are Syrian, although they have no documents to prove it. The so-called Balkan corridor for the migrant flight starts in Turkey, then goes through Macedonia and Serbia before entering the European Union in Hungary.

“You can see that something is fishy when most of those who cross into Serbia enter January first as the date of their birth,” said border police officer Miroslav Jovic. “Guess that’s the first date that comes to their mind.”

The chief of the European Union border agency Frontex said that trafficking in fake Syrian passports has increased.

“A lot of people enter Turkey with fake Syrian papers, because they know that they’ll get asylum in the EU more easily,” Fabrice Leggeri said.

Syrians transiting through Serbia are concerned about the trend.

“Everyone says they are Syrian, even those who are obviously not,” said Kamal Saleh, pointing toward a group of people camping in a Belgrade park. “That is not good for us Syrians because of limited number of people who will get the asylum.”

Saleh left everyone he loves back in Syria — his wife, a baby boy and a shattered home in a Damascus suburb.

But, unlike many other migrants surging into Europe, he feels fortunate: he has a Syrian passport that he keeps carefully wrapped in a plastic folder and tucked inside his secret trouser pocket. The document, if genuine, should prove that he is a refugee fleeing war, and not a migrant fleeing poverty or economic hardship. A huge difference when asylum applications are considered.

His countryman, who identified himself only as Yemen, added: “There are too many people saying we are from Syria, but he is not from Syria. He is black and he said ‘I am from Syria.’ Unbelievable. ”

International aid agencies estimate that nearly 340,000 people have sought to cross EU borders since January. Two-thirds of the latest European arrivals are believed to be from Syria, Afghanistan, Iraq, Somalia and Eritrea — countries considered by international aid groups to be “refugee producing states,” due to ongoing war or records of human rights abuses.

According to the 1951 Refugee Convention, those fleeing violence and persecution are entitled to basic rights under international law, including the right not to be immediately deported and sent back into harm’s way. A migrant could be someone who chooses to resettle to another country in search of a better life and is eligible for deportation.

EU rules say the country where a migrant first arrives must process the asylum claim. But Germany last week abolished this obligation for Syrians, triggering a surge of people trying to travel through the EU to get there, adding that only refugees fleeing for their life, and not those fleeing poverty, will be allowed to stay.

Aware of the potential asylum rejection, many migrants fleeing poverty are getting rid of their identity documents altogether.

Among those who had no second thoughts about ditching their true identity was Rafik from Pakistan.

“I’m leaving my old life behind,” said Rafik, who gave only his first name because he feared repercussions when applying for asylum in Germany. “I’m starting a new one.”

“I don’t have a passport, nor any other identity paper,” he said, as he dashed under the fence into Hungary. “Let’s see which country they will choose to kick me back to.”