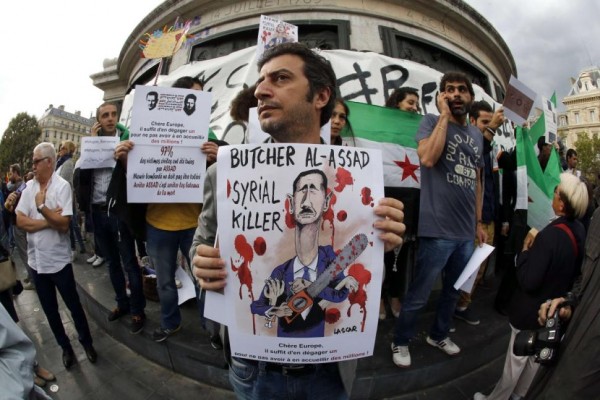 A protester holds a placard with a painting of Bashar al-Assad reading ‘Butcher Al Assad, Syrial Killer – Dear Europe, It only needs to get one out, not to have to welcome millions.’
Share:

Anti-government violence erupted Saturday in a southern Syrian province that had largely stayed on the sidelines of the country’s civil war, a day after the killing of a prominent cleric in explosions that claimed the lives of at least 25 others, activists and pro-government media said.

Sheik Wahid Balous, a cleric of the Druze minority sect, was a prominent critic of President Bashar Assad, calling on youth in the Druze stronghold of Sweida province to refuse to serve in the military. He was also a critic of the Islamic State fighters who have taken over a third of the country and are fueling the civil war that has killed more than 250,000 people and wounded over 1 million.

Balous, who was a strong supporter of rebels trying to topple Assad, died Friday in one of two consecutive car bomb explosions, including one near the National Hospital in Sweida. On Saturday, the Britain-based Syrian Observatory for Human Rights and other activist groups said rioters destroyed the statute of late Syrian President Hafez Assad in Sweida and besieged security offices, holding the government responsible for the cleric’s death.

The Observatory said the death toll rose Saturday to 37, including six security personnel killed in clashes with rioters. The city had witnessed large rallies in the days before the explosions against the failure of the government to provide basic services. Activists reported that there was no Internet service for the past few days.

Syria’s official news agency and other activists group put the death toll from the blasts at 26. There was no immediate claim of responsibly for the bombings.

The Syrian government called the blasts “cowardly terrorist acts.” A police commander in the city, Mohammed Samra, said Sweida was “calm and stable” and denied any unrest, accusing such reports of aiming to undermine security in the area.

Some of Balous’ supporters said in a statement they will expel security forces from Sweida province, which until now has largely stayed out of the fighting in Syria’s civil war.

City elders appealed for calm, warning against attempts to drag the province toward violence. Another statement from the city’s Druze leaders urged supporters to be patient as the cleric’s brother, who was seriously wounded in the attack, recovers.

A 10th century offshoot of Shiite Islam, the Druze made up about 5 percent of Syria’s prewar population of 23 million people, and is split between supporters and opponents of Assad.

Jumblatt urges the Druze to rise against Assad

In neighboring Lebanon, which also has a sizable Druze population, the sect’s political leader Walid Jumblatt said Balous’s death was a “painful strike” to the community.

“It is time for the honorable citizens [of Sweida] to rise up in the face of the Syrian regime that wants repression and to spread sedition,” he told the anti-government Syrian Orient TV.

The National Syrian Coalition opposition group in exile also blamed the Syrian government for the killing of the cleric, known as “the Dignity Sheikh,” saying it was part of an attempt to stop the anti-government protests in recent days. In a statement, coalition member Suheir Attasi said killing Balous only “increased the popular anger in the province.”

Meanwhile Saturday, US Secretary of State John Kerry called Russian Foreign Minister Sergey Lavrov to express concerns about “reports suggesting an imminent enhanced Russian military buildup there,” according to a statement that did not elaborate or confirm the accuracy of the report. Russia has been a stalwart ally of Assad throughout Syria’s civil war and has provided diplomatic support and weaponry to help the Syrian leader maintain his grip on power. Moscow also maintains a small naval facility at the Syrian port of Tartous on the Mediterranean Sea.