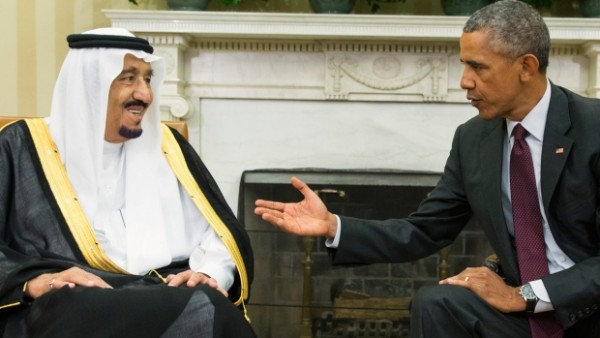 President Obama invited the Saudi king to the U.S. to discuss the Iran nuclear deal and its wider effect on the Middle East.

“I’m happy to come to a friendly country to meet a friend,” Salman said. “We want to work together for world peace.”

The two leaders also called on Lebanon’s parliament to elect a new president — a role they believe is of “critical importance.”

The meeting comes five months after the first shipment of Saudi-funded French arms arrived in Lebanon.

The $3 billion Saudi Arabian grant is aimed at helping bolster the Lebanese army over the next four years with new transport vehicles, tanks, warships, and communication equipment.

In June, the U.S. State Department announced its approval of a possible sale of six A-29 Super Tucano aircrafts to Lebanon, at an estimated cost of $462 million.

According to Riad Kahwaji, CEO of the Dubai-based Institute for Near East and Gulf Military Analysis, Lebanon would pay for the aircrafts using another $1-billion Saudi grant.

“The relationship has grown deeper and stronger over the past seven decades in the political, economic, military, security, cultural and other spheres of mutual interest,” said a statement by the White House press office.

Speaking after the meeting between Obama and Salman, Saudi Foreign Minister Adel al-Jubeir said Obama had assured the Saudi king that the agreement prevents Iran from acquiring a nuclear weapon, has a robust and unprecedented inspections regime that includes inspections of all sites… and that has provision for snap back of sanctions should Iran violate the terms of their agreement,” he added.

Under those conditions, al-Jubeir said, Saudi Arabia was satisfied that the deal would contribute to security and stability in the Middle East.

“Now we have one less problem for the time being to deal with, with regards to Iran,” al-Jubeir said.

The foreign minister said he hoped Iran would use the windfall from the lifting of sanctions for its own development rather than engage in what he termed as “nefarious activities in the region”.

Gulf states fear that lifting sanctions could allow Iran to extend its support for militant groups and actions across the region they consider destabilizing.

The Saudi foreign minister also said assurances had been given to President Obama that efforts would be made to relieve the humanitarian situation in Yemen.

The US has backed a Saudi-led coalition’s attempts to restore the government in Yemen, in its campaign against Houthi rebels.

Human rights activists and humanitarian organisations have criticised Mr Obama’s decision to support the coalition air campaign in Yemen, which has killed hundreds of civilians since March, and the naval blockade that has caused severe shortages of food, fuel and medicine.

Mr Obama pressed King Salman to ensure humanitarian organizations were given unrestricted access to Yemen, where the Saudis are leading a coalition against the Houthi rebel movement.

“We share concerns about Yemen and the need to restore a function government that is inclusive and that can relieve the humanitarian situation there,” Mr Obama said after the meeting.

US-Saudi ties are said to have been strained by Mr Obama’s unwillingness to take military action against Syria’s President Bashar al-Assad, and his support for a nuclear deal that the Saudis fear will ultimately allow Iran to acquire nuclear weapons.

In May, King Salman skipped a summit of Gulf Arab leaders at Camp David, which was widely interpreted as a snub for the US president.

The Obama administration has vowed to make certain that Iran abides by its commitments under the nuclear deal and to do everything it can to “counter Iran’s destabilising activities” in the Middle East once the country’s estimated $56bn (£37bn) of frozen assets are released.

In an effort to reassure its Gulf allies, the US has been working with them to develop a ballistic missile defence system, provide special operations training, authorise arms transfers, strengthen cyber security, engage in large-scale military exercises, and enhance maritime operations to halt illegal Iranian arms shipments.

“We are determined that our Gulf friends will have the political and military support that they need,” Secretary of State John Kerry said on Wednesday.

Senior administration officials told the New York Times that the Pentagon was finalising a $1bn arms agreement that would provide weapons for the Saudi military for the campaign against the jihadist group Islamic State and the Houthi rebel movement in Yemen.