Migrants leaving Budapest on foot and heading to Austria 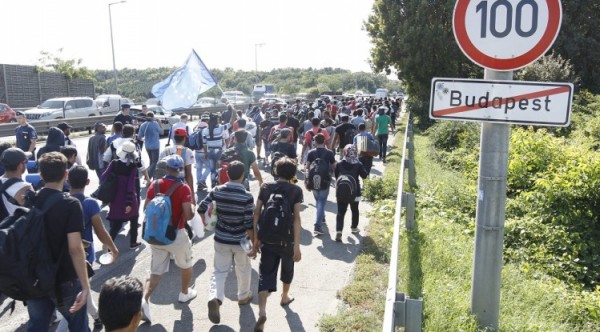 Hundreds of refugees who have been stuck for days at a train station in Budapest began marching out of the city Friday intent on reaching Austria on foot, after Hungarian authorities blocked them from boarding westbound trains.

The huge crowd included people in wheelchairs and on crutches, as well as parents carrying children on their shoulders, all prepared to march 175 kilometres (110 miles) to the border, an AFP reporter at the scene said.

Carrying their belongings in bags and backpacks, the refugees formed a line stretching nearly a half-mile long as they snaked Budapest, at times blocking traffic. By mid-afternoon they had reached the M1 motorway on the outskirts of the city.

The people, many of them Syrians fleeing war, want to eventually reach Germany or elsewhere in the West and are trying to avoid registering in Hungary, which is economically depressed and more likely to send them back home than many other western european nations. Under European law, asylum seekers will be approved or disapproved in the countries where they are first registered.

They were part of an estimated 2,000 people stuck in makeshift refugee camps at Budapest’s Keleti station, after authorities had blocked them from boarding trains to Austria and Germany because they lacked EU visas.

One man, 23-year-old Osama Morzar from Aleppo, Syria, was so determined not to be registered in Hungary that he removed his fingerprints with acid, holding up totally smooth finger pads to an Associated Press reporter as proof.

“The government of Hungary is very bad,” said Morzar, who studied pharmacology at Aleppo’s university. “The United Nations should help.”

A couple from Baghdad, Mohammed and Zahara, who marched with a toddler, said they had been in a Hungarian asylum camp and got roughed up by guards because they refused to be fingerprinted. She said she has family in Belgium and is determined to seek asylum there. They would not give their last names.

Some flashed victory signs while others waved images of German Chancellor Angela Merkel, who recently announced that Berlin was easing asylum restrictions for Syrians.

Meanwhile, a standoff continued for a second day at the station in Bicske, a town northwest of Budapest that holds one of the country’s five camps for asylum seekers.

Hundreds of people sat on a train there, some with tickets they had purchased to Berlin or Vienna. Although some eventually relented and registered at the asylum centre, most were determined not to.

At some point, about 100 people left the train to wage a protest in front of a large number of TV cameras and journalists. Using white paint, they wrote “no camp / no Hungary / Freedom Train” on the side of the train.

“The situation is so bad. We have so many sick people on the train. We have pregnant women, no food, no water,” said Adnan Shanan, a 35-year-old from Latakia, Syria, who said he was fleeing war in his homeland.

“We don’t need to stay here one more day. We need to move to Munich, to anywhere else, we can’t stay here. We can’t wait until tomorrow. We need a decision today, now,” Shanan said.

A Reuters reporter said some at the train station had told police that women and children in their group would also leave for the border on foot on Saturday if the train was not allowed to continue its journey.

At the same time, police said hundreds of refugees had broken out of a camp in Roszke on Hungary’s southern border with Serbia.

Police said they had given chase to the approximately 300 people and halted traffic on a nearby motorway. Another 2,300 people still inside the camp were also threatening to break out, they added.

Hungary has in recent months joined Italy and Greece as a “frontline” state in Europe’s migrant crisis, with 50,000 people trekking up the western Balkans and entering the country in August alone.

A record 3,300 migrants crossed into Hungary on Thursday, according to the latest figures from the UN refugee agency.

The right-wing government headed by Prime Minister Viktor Orban has responded to the influx by erecting a controversial razor-wire barrier along its 175-kilometre (110-mile) border with Serbia.

Orban has defended his handling of the crisis, blaming Germany’s lifting of asylum rules for the thousands of migrants travelling through his nation.

“Nobody wants to stay in Hungary, neither in Slovakia, nor Poland, nor Estonia. All want to go to Germany. Our job is just to register them,” he said Thursday while in Brussels for talks on the crisis with European Commission chief Jean-Claude Juncker and EU president Donald Tusk.