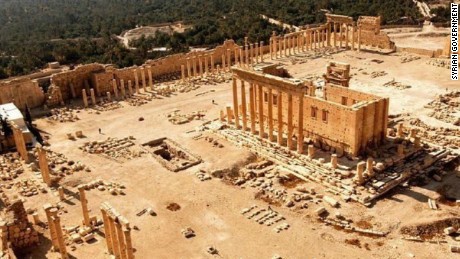 A satellite image on Monday shows that the main building of the ancient Temple of Bel in the Syrian city of Palmyra has been destroyed, a United Nations agency said. The image was taken a day after a massive explosion was set off near the 2,000-year-old temple in the city occupied by Islamic State militants.

Earlier, Maamoun Abdulkarim, the head of the Antiquities and Museums Department in Damascus, said there was conflicting information about the fate of the temple, one of the most prominent structures in a sprawling Roman-era complex, because eyewitnesses were unable to approach the site.

But Einar Bjorgo, manager of Geneva-based U.N. satellite analysts UNOSAT, said a satellite image taken Monday “unfortunately shows the destruction of the temple’s main building as well as a row of columns in its immediate vicinity.” UNOSAT based its findings after comparing the image with one taken on Aug. 27 which showed the main building and columns still intact.

Bjorgo said the images were important so the U.N. cultural agency UNESCO could have “objective information” about the situation in Palmyra, which UNESCO has designated a world heritage site.

The IS group, which captured Palmyra from forces loyal to President Bashar Assad in May, destroyed the smaller Temple of Baalshamin in the complex last week and posted images of the destruction days later. UNESCO condemned the act as a war crime.

Activists, including a Palmyra resident, said earlier that an Islamic State bombing extensively damaged the 2,000-year old temple Sunday. The resident described a massive explosion, adding that he saw pictures of the damage but could not get near the site.

An Islamic State operative told The Associated Press over Skype on Monday that militants detonated explosives near the temple, without elaborating on how much of it was damaged. He spoke on condition of anonymity because members of the extremist group are not allowed to speak to journalists.

Residents in Palmyra told the official Syrian state news agency that IS militants destroyed large parts of the temple and booby trapped other parts of it, expressing concern that they plan to destroy the rest soon.

Amr al-Azm, a former Syrian antiquities official who now is a professor at Shawnee State University in Ohio, said he believed a very large amount of explosives was used and the damage to the Temple of Bel was likely extensive.

“This is the most devastating act yet in my opinion. It truly demonstrates ISIS’s ability to act with impunity and the impotence of the international community to stop them,” al-Azm said, using an alternative acronym for the group.

Abdulkarim said he was waiting for pictures to emerge in the coming days to determine the extent of the damage.

Earlier this month, relatives and witnesses said that IS militants had beheaded Khaled al-Asaad, an 81-year-old antiquities scholar who devoted his life to understanding Palmyra.

The Islamic State group, which has imposed a violent interpretation of Islamic law across its self-declared “caliphate” straddling Syria and Iraq, says such ancient relics promote idolatry.

It already has blown up several sites in neighboring Iraq, and it is also believed to be selling looted antiquities.

The Temple of Bel, dating back to 32 AD, shows a unique merging of ancient Near Eastern and Greco-Roman architecture. It is dedicated to the Semitic god Bel and is considered one of the most important religious buildings of the first century. The temple consisted of a central shrine within a colonnaded courtyard with a large gateway, within a complex that has other ruins, including an amphitheater and some tombs.

It stood out among the ruins not far from the colonnades of Palmyra, which is affectionately known by Syrians as the “Bride of the Desert.”

Palmyra was an important caravan city of the Roman Empire, linking it to India, China, and Persia. Before the outbreak of Syria’s conflict in March 2011, the UNESCO site was one of the top tourist attractions in the Middle East.