Lebanon protesters spell out demands ahead of protest 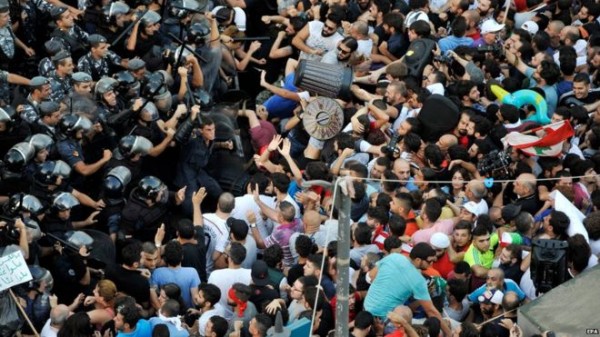 Lebanese protesters who first took to the streets over a trash crisis said Friday they will call for new parliamentary elections and the environment minister’s resignation at a weekend demonstration.

The “You Stink” campaign has called for a massive protest in central Beirut on Saturday to follow demonstrations last weekend that targeted not only a trash collection problem but also Lebanon’s stagnant political scene.

At a news conference, the group said the demonstration would urge the resignation of Environment Minister Mohammed Mashnuq and new parliamentary elections.

The demonstrators would also call for trash collection to be handed over to local municipalities, and for accountability for the use of violence against protesters last week.

Asaad Thebian, a member of the campaign, said the protest would be non-partisan and open to all.

“We’re going out tomorrow from all areas, from all affiliations,” he said.

The “You Stink” campaign began in response to a trash crisis that started with the closure of Lebanon’s largest landfill in mid-July.

The closure left trash piling up in the streets of the capital and beyond and saw public anger rise to unprecedented levels.

Last weekend, several thousand demonstrators turned out on Saturday and Sunday for protests that included chants seeking the “fall of the regime,” in an echo of protests elsewhere in the region.

On both days, the initially peaceful protests descended into violence between some demonstrators and security forces.

The campaign blamed “troublemakers” for the unrest, which saw security forces pelted with rocks and lit fireworks, and protesters hit by rubber bullets and water cannon fire.

The group said Friday it had organised a team to monitor Saturday’s demonstration and prevent violence from breaking out.

The protest is to start at 5:00 pm (1400 GMT) with a march from the interior ministry towards Martyrs Square in downtown Beirut.

Though the demonstrations began with frustration over the trash crisis, they have evolved into an outlet for anger about Lebanon’s entire political system.

The country’s parliament has twice extended its mandate since the last elections in 2009, and has been unable to elect a president since the post was vacated in May 2014.

The cabinet meanwhile is deadlocked over a dispute between its two main political blocs.

Lebanon suffers chronic electricity and water shortages and its resources have been stretched further by an influx of more than one million refugees from the war in neighboring Syria.