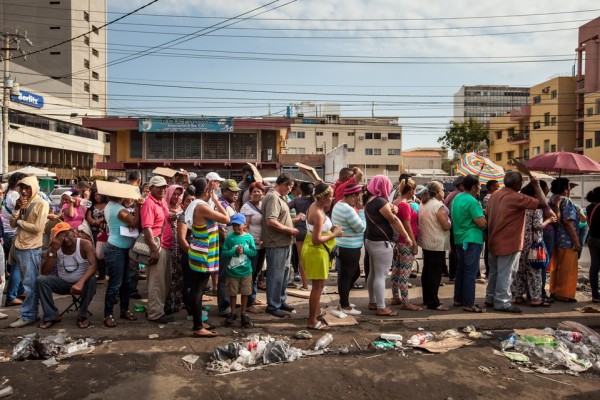 Shoppers wait in a long line to enter the “Latino Supermarket” in the Dr. Portillo area of Maracaibo, Venezuela.MIGUEL GUTIÉRREZ FOR THE WALL STREET JOURNAL
Share:

LA SIBUCARA, Venezuela—Hours after they looted and set fire to a National Guard command post in this sun-baked corner of Venezuela earlier this month, a mob infuriated by worsening food shortages rammed trucks into the smoldering edifice, reducing it mostly to rubble.

The incident was just one of numerous violent clashes that have flared in pockets around the country in recent weeks as Venezuelans wait for hours in long supermarket lines for basics like milk and rice. Shortages have made hunger a palpable concern for many Wayuu Indians who live here at the northern tip of Venezuela’s 1,300-mile border with Colombia.

The soldiers had been deployed to stem rampant food smuggling and price speculation, which President Nicolás Maduro blames for triple-digit inflation and scarcity. But after they seize contraband goods, the troops themselves often become targets of increasingly desperate people.

“What’s certain is that we are going very hungry here and the children are suffering a lot,” said María Palma, a 55-year-old grandmother who on a recent blistering hot day had been standing in line at the grocery store since 3 a.m. before walking away empty-handed at midday.

In a national survey, the pollster Consultores 21 found 30% of Venezuelans eating two or fewer meals a day during the second quarter of this year, up from 20% in the first quarter. Around 70% of people in the study also said they had stopped buying some basic food item because it had become unavailable or too expensive.

Food-supply problems in Venezuela underscore the increasingly precarious situation for Mr. Maduro’s socialist government, which according to the latest poll by Datanálisis is preferred by less than 20% of voters ahead of Dec. 6 parliamentary elections. The critical situation threatens to plunge South America’s largest oil exporter into a wave of civil unrest reminiscent of last year’s nationwide demonstrations seeking Mr. Maduro’s ouster.

“It’s a national crisis,” said Marco Ponce, head of the Venezuela Observatory of Social Conflict, noting that unlike the political protests of last year, residents are now taking to the streets demanding social rights.

The nonprofit group recorded 500 protests over food shortages during the first half of 2015, 56 looting incidents and dozens of attempted lootings at grocery stores, pharmacies and warehouses. Even delivery trucks are frequently targeted. “If people aren’t outside protesting, they’re outside standing in line for goods,” Mr. Ponce said.

The unrest is a response to dramatically worsening living conditions for Venezuelans as the economy reels from oil’s slump following more than a decade of populist spending that left the government broke.

In past years, when oil prices were high, Venezuela’s leftist government flooded markets with subsidized goods ranging from cooking oil to diapers. It gave citizens in border towns like La Sibucara not only access to cheap supplies, but also a source of income as many people trafficked products—including nearly free gasoline—to neighboring Colombia, drawing handsome profits.

With the government now struggling to pay for imports, there is less inventory to go around. In recent days, Mr. Maduro upped the ante by ordering troops along the border to seize contraband, deporting hundreds of Colombians whom the government blames for smuggling and shortages.

Armed soldiers monitor supermarkets as part of an effort the president calls “Operation People’s Liberation.” More than 6,000 alleged smugglers have been arrested this year, according to the attorney general’s office. Images of soldiers posing with handcuffed suspects and stacks of decommissioned goods are splashed on state media.

“We’re going to get to the root of the problem,” Mr. Maduro said in a national address last week after a shootout with smugglers in the frontier state of Táchira left three National Guard troops injured and pushed Venezuela to shut key border crossings.

The smugglers targeted by the government crackdown are called bachaqueros, named after a leaf-cutter ant that can carry many times its weight. The word, first used here in the northwestern state of Zulia, has become part of daily national parlance as a label for Venezuelans who buy price-controlled goods and resell them for profit on the black market.

While the government blames the shortages on bachaqueros, economists say they are the consequence of price controls and a broken economic model that has left average Venezuelans with diminishing employment options.

“The people that used to give us work—the private companies, the rich—have all gone,” said Ms. Palma in La Sibucara, adding that she also occasionally traffics goods to get by. “It’s not the greatest business but we don’t have work and we have to find a way to eat.”

Earlier this month, Venezuela’s military raided homes and warehouse around the town, seizing tons of allegedly hoarded goods that were destined to leave Venezuela or be resold on the black market for well above the state-set price.

Lisandro Uriana, who had a black eye and a bandaged leg, said he and two friends were badly beaten up when a neighbor’s house was raided. “They didn’t say or ask us anything,” recalled the 46-year-old Wayuu father of four, who lives in a tin-roofed house of two rooms. “They just beat us and we couldn’t defend ourselves because they were armed and were many. I don’t even smuggle…and now I can’t even get up to work.”

The day of the raids, neighbors said residents pleaded with troops at the National Guard command post to distribute seized food to non-smugglers but were turned away. An angry mob soon formed, sending soldiers fleeing before they attacked the office and even stripped it of scrap metal.

“These are just some isolated cases,” Manuel Graterol, a National Guard general overseeing operations in La Sibucara on a recent day, said, blaming the unrest and the bachaquerophenomenon on opponents of Mr. Maduro’s government.

“Many of them are being shameless,” said Gen. Graterol. “They’re committing treason against our country, taking food and crossing the border.”

But such food fights have broken out in numerous small municipalities around the state of Zulia. In the nearby town of Sinamaica, the ground floor of the mayor’s office was set on fire in early August following a wave of unrest that included gangs looting delivery trucks. The unrest, locals said, began after police detained a truck loaded with rice.

Street vendor Robert Guzmán, wearing a red pro-government T-shirt, said the sacking was justified. “We are very peaceful people,” Mr. Guzmán said of his Wayuu community, “but what happened was an act of desperation. I think this is going to get worse.”

Resident Yusleidy Márquez said she too fears the worst. The basket of subsidized food the government gives her mother every 15 days only feeds her family for two days. Lately, she only eats a cornmeal patty for lunch because she can’t afford more.

“I think we’re going to die of hunger,” she said.