Hezbollah threw its weight behind the mass garbage protests 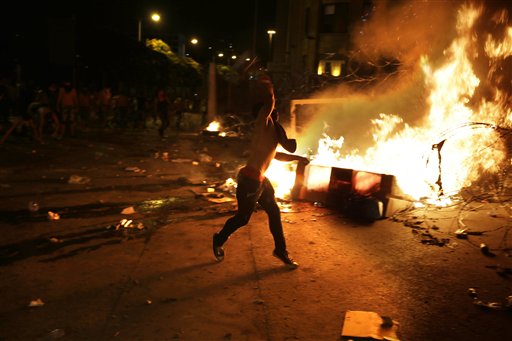 The explosion of anger targets the endemic corruption, hapless government and sectarian divisions of a brittle country once torn by civil war and now struggling with a wave of hundreds of thousands of Syrian refugees.

A grassroots youth movement calling itself “You Stink” mobilized thousands of people in two rallies over the weekend, and has called for another large protest on Saturday. The Hezbollah announcement of support for the protests is likely to fuel concerns the Iranian-backed group will try to hijack a rare, non-political movement for its own political gain.

Hezbollah ministers and their allies walked out of a Cabinet meeting Tuesday meant to discuss the worsening garbage crisis. Prime Minister Tammam Salam called the emergency session after the weekend clashes between security forces and demonstrators protesting corruption and poor public services.

The six ministers withdrew four hours into the meeting. Foreign Minister Gibran Bassil, whose Free Patriotic Movement is aligned with Hezbollah, said he was pulling out because of the political “theater” surrounding the trash issue.

During the Cabinet session, ministers unanimously rejected the winning bidders to manage Beirut’s trash collection, citing high costs and a bidding procedure some said was questionable. The Cabinet tasked a ministerial committee with restarting the bidding, meaning no imminent solution to the crisis was likely.

Salam suggested dumping the garbage in the remote, impoverished region of Akkar, which has been neglected for decades, in exchange for $100 million in development projects as an incentive.

That further riled the protesters. “Akkar is not a garbage dump!” read the slogan on one protester’s T-shirt.

The trash crisis has exacerbated the long-existing fault lines in Lebanon which in recent years have pitted the Iranian-backed Hezbollah against the country’s Western-aligned, pro-Saudi camp. Those divisions mirror the larger regional Shiite-Sunni divide, and have long paralyzed the government.

Although Salam’s government has elements from both camps, Hezbollah regards the prime minister as an ally of Saudi Arabia. The Shiite group’s ally, Christian leader Michel Aoun, has been assailing the prime minister over his handling of Cabinet and security appointments.

In a statement Tuesday, Hezbollah said the garbage crisis reflected the “endemic and accumulated corruption of the past two decades” and policies that only serve “personal and political interests at the expense of citizens.” It said holding peaceful protests was a legitimate right.

A columnist in the daily An-Nahar newspaper accused Hezbollah of exploiting the “You Stink” movement for its own agenda.

Tarek Sarhan, a 17-year-old “You Stink” supporter, said there would always be groups that try to manipulate grass-roots movements for their own political gains in a country like Lebanon.

The protesters say they are fed up with leaders they accuse of caring only about lining their own pockets and a system they say ensures incessant bickering and paralysis. They contend the entire trash crisis is about which politicians get the bigger cut from waste management contracts.

The country’s politicians have been unable to decide on a president, a post reserved for a Christian in a sectarian power-sharing system, for over a year. According to that system, the prime minister must be a Sunni and the parliament speaker a Shiite. The current parliament speaker, Nabih Berri, has been in his post for 23 years.

Parliament has extended its term twice without elections and has been paralyzed because some lawmakers insist a president be elected first. Government has not made any substantial decisions as rival parties bicker over the decision-making process in Cabinet in the absence of a president to preside over the sessions.

Anger about the heaps of trash accumulating in Beirut’s streets boiled over this week, with thousands protesting the government’s failure to deliver basic services.

The protests turned violent over the weekend, prompting the government to erect a concrete wall outside its main building to prevent protesters from reaching it.

Within hours, the wall was filled with anti-government graffiti.

“State of Shabiha,” one young man scrawled, an Arabic term for thugs. Another drawing showed a man’s body wrapped in a black cloth below a caption that read: “The shroud of the state.”

On Tuesday, authorities began removing the wall, just 24 hours after it was installed.

“They won’t fool us by removing the wall,” said Sarhan, the You Stink supporter. “Remove it or not, we don’t care. We want… an end to sectarianism. We want to build a state,” he said.

“This is a corrupt government, an immoral government that is starving us and conspiring against the people,” said Hassan Qatayesh, who suffered an injured jaw when he was struck by rocks during Saturday’s protest.

“They raised the wall to protect themselves from the people, thinking that this wall will prevent our voices from reaching them. But our voices are louder than walls, tear gas and rubber bullets.”