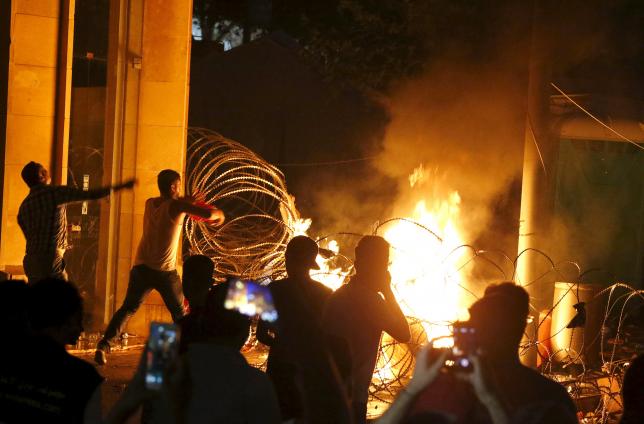 Protesters start a fire during a protest against corruption and against the government’s failure to resolve a crisis over rubbish disposal, near the government palace in Beirut, Lebanon August 23, 2015. REUTERS/Mohamed Azakir
Share:

Protests against the Lebanese government turned violent for a second day on Sunday, and Prime Minister Tammam Salam threatened to resign as public discontent brought thousands into the streets.

Anger at the Salam-led unity cabinet grouping Lebanon’s fractious politicians has come to a head over its failure to resolve a crisis over garbage disposal that reflects the wider failings of the weak state.

Salam’s cabinet has been hamstrung by political and sectarian rivalries that have been exacerbated by wider crises in the Middle East, including the war in neighboring Syria.

Salam, in a televised address, warned that Lebanon was headed towards collapse and that a bigger problem than the trash crisis was the country’s “political garbage”.

Thousands of protesters have taken to the streets of Beirut this weekend as part of the “You Stink” campaign directed at the government.

Water cannon and tear gas were fired at protesters, and demonstrators threw rocks and sticks at riot police as violence flared near Salam’s offices in central Beirut. “The people want the downfall of the regime,” chanted protesters.

Security forces fired into the air, and clouds of tear gas wafted through the streets as police tried to force protesters from the area.

Some demonstrators lit fires. A tree next to a church was set ablaze, road signs were pulled from the ground, and shop fronts smashed. Violence also flared on Saturday night.

Many dozens of people have been hurt over the two days. Thirty members of the Internal Security Forces were injured on Sunday, one seriously, the National News Agency said.

A leader in the You Stink campaign said “infiltrators” were behind the violence. “We started peacefully, and we will continue peacefully,” Hassan Shams told New TV.

RELATED COVERAGE
› Gunfire heard in Beirut after protest turns violent: witnesses
Samer Abdullah, a 39-year-old activist, said: “People went out because they don’t have power or electricity. They have a million problems, and the garbage problem is the tipping point.”

There was no obvious participation by any of the big, mostly sectarian parties that have long dominated Lebanese politics.

Salam, 70, has often expressed frustration at the failings of his government, which brings together the main Lebanese parties, including the Sunni-led Future Movement of Saad al-Hariri, Shi’ite Hezbollah and rival Christian parties.

The Salam government was formed with the blessing of regional powers Iran and Saudi Arabia, which exercise influence over rival Lebanese leaders.

RELATED VIDEO
Video
Gunfire heard in Beirut after protest turns violent – witnesses
Salam said that if a cabinet meeting scheduled for Thursday was not productive on issues including a tender to decide on a new refuse collection company, “there would be no necessity for the government after it”.

“I warn that we are going towards collapse if matters continue,” Salam said in his address earlier in the day.

“Frankly, I have not and will not be a partner in this collapse. Let all officials and political forces bear their responsibilities.”

Should Salam resign, a caretaker government would stay on. His resignation would, however, trigger a constitutional crisis. In Lebanon, it is the president who appoints the prime minister.

But the presidency has been vacant since Michel Suleiman’s term expired more than a year ago, and filling it requires a political deal many believe can only be brokered by Iran and Saudi Arabia.

“The trash is the straw that broke the camel’s back, but the story is much bigger than this straw,” Salam said. “It is the story of the political garbage in the country.”

He warned the heavily indebted government would be unable to pay salaries next month. Unable to issue new debt, Lebanon risked being classified “among the failing states”.

The country’s public debt stands at about 143 percent of gross domestic product, a government source said.

Salam vowed to bring to account officials responsible for what he described as an excessive use of force on Saturday.

The trash crisis began last month when the main refuse tip for Beirut was closed, with no ready alternative. While collection has resumed, no solution has been found.

Lebanon, still rebuilding from its 1975-1990 civil war, has been jolted by spillover from the Syria war, including political violence and a flood of refugees.

Hezbollah, a powerful Iranian-backed party, is fighting alongside President Bashar al-Assad in the Syrian conflict.
REUTERS