Lebanese protest as garbage piles up in Beirut 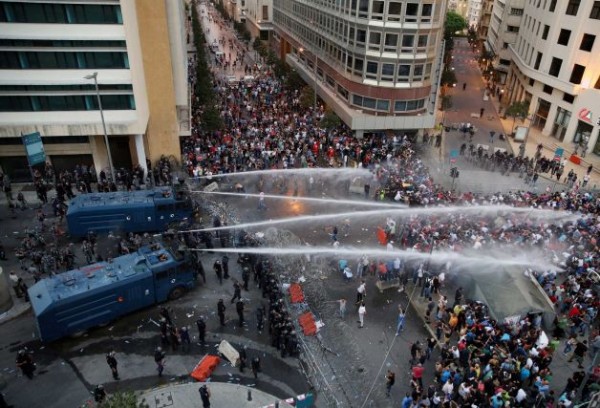 Protesters returned to downtown Beirut on Sunday to demand that the government resign over its inability to remove enormous heaps of garbage from the city’s streets. Demonstrations on Saturday led to clashes with the police, who used water cannons, tear gas and rubber bullets to disperse the crowds. Dozens of people were injured.

The garbage crisis has become the most glaring sign — at least to the senses of sight and smell — of the political paralysis that grips the nation and has unified many Lebanese, usually divided by sect, religion and region, in what the protesters call the “you stink” campaign.

The office of president has been vacant for more than a year, and Parliament essentially re-elected itself after being unable to agree on new elections, even as the country absorbed more than 1.2 million refugees from the Syrian civil war.Fouad al Hassan, an actor known for his work in television comedies, said he took part in the protests outside the Grand Serail, the stately Ottoman-era building where Prime Minister Tammam Salam has his office, because “I want to change the system.”

“We want new blood or the country will stay the same,” added Mr. Hassan, 65. “Today, it’s too late for me, but I want it for my children. I want them to live a better life.”

Aline Shirfan, a 21-year-old civil engineer, said it was her first time participating in a demonstration: “I have nothing to lose, I’m so desperate. If we don’t die from a bullet we will die from cancer from the trash smell.”

As the rallies proceeded, Mr. Salam admitted at a news conference that “excessive force” had been used on Saturday, and that the demonstrators had a legitimate grievance.

“What happened yesterday was the result of accumulating matters that have been building up and increasing the people’s suffering as the result of the vacuum we are living,” Mr. Salam said. He promised that he would hold government officials accountable and said, “I won’t cover anyone.”

Asked if he would resign, Mr. Salam said, “My patience is limited, and it’s linked to yours.”

For many years, Beirut’s trash and that much of central Lebanon was sent to a landfill near Naimeh, a town south of the capital.

But the amount of trash long ago exceeded that landfill’s capacity, and communities nearby complained of the smell and blamed it for health problems. Protesters blocked the road to the landfill last summer, causing a pileup of garbage in Beirut then.

They relented after the government promised to find alternatives. But when no alternatives materialized, the protesters blocked the road again last month, leading to the present crisis.

The complaints that brought ordinary citizens into the streets of Beirut over the weekend were not unlike the festering anger that prompted recent protests in Baghdad over the Iraqi government’s failure to provide enough electricity to power air-conditioners when temperatures soared well above 100 degrees Fahrenheit. In other countries, like Brazil, Honduras and Guatemala, leaderless protests have arisen suddenly and more or less spontaneously over allegations of government corruption and widespread perceptions of a lack of accountability.

The Lebanese Red Cross said it had transferred more than 30 wounded protesters to hospitals for treatment, with Health Minister Wael Abu Faour calling on medical centers to receive all cases.

Police first began firing water cannons at the protesters around 7:20 p.m., initiating a series of violent acts that resembled police actions during the demonstration one day before when they also used rubber bullets to attack supporters of the “You Stink” group.

Some of the protesters responded by throwing water bottles and rocks at police.

About 20 minutes later, the protesters slowly started evacuating the Riad al-Solh protest square and moved toward Martyr’s Square, chanting “the people want the downfall of the government,” and “revolution!”

A couple hundred protesters stayed behind and clashed with police from across a barb wire barrier, setting fire to a police motorcycle that somehow found its way into the square.

Then around 8:50 p.m., police fired several rounds of tear gas, forcing protesters who tried to breach the security barrier to pull back.

Around 9:10 p.m., You Stink spokesperson Ali Bazzi called on protesters to evacuate Downtown Beirut and return to Riad al-Solh Square Monday for a fresh protest.

But clashes continued throughout the night. Bazzi and other You Stink officials denied that the protesters who had battled police in Riad al-Solh belonged to their movement, accusing political parties of sending their partisans to stir violence.

The protest had officially began at 6 p.m., but hundreds had been rallying at Riad al-Solh since the early morning.

You Stink vowed to stay planted in Downtown Beirut until Prime Minister Tammam Salam steps down.

“We demand that Salam resign by 6:00 p.m. tonight (Sunday),” a protester at Riad al-Solh said, reading out a statement following a meeting by campaign organizers to respond to Salam’s earlier press conference.

Bazzi hailed the release of all protesters detained by police during Saturday’s demonstration as a victory for the movement, but said they would not rest until those who attacked them were held accountable.

He rejected statements by political officials who offered support to the movement, saying it “belongs to the people.”

“No one can claim this street movement,” he said.

The campaign also insisted that their movement is a peaceful one and demanded the state hold security forces accountable for Saturday’s violence.

Salam earlier Sunday called on civil society organizations and activists to form a delegation to meet with him to discuss the crises gripping the country.

“I am ready to hear your demands … I have nothing to hide.”

The premier also vowed to hold those responsible for the excessive violence employed against demonstrators accountable.

Protesters, activists and civil society groups remained camped out Sunday at Riad al-Solh Square near the Grand Serail, one day after a massive protest organized by You Stink turned violent.

Clashes broke out between demonstrators and police, who used rubber bullets, water cannons and tear gas to disperse thousands of unarmed protesters.

At least 75 demonstrators and 35 officers were wounded.

However, the You Stink campaign organizers demanded that security forces prevent them from going through with their act, accusing the masked protesters of trying to provoke a violent response.

The activists later accused the protest “infiltrators” of vandalizing an ISF vehicle.

The protesters placed the barbed wires back in its places in an attempt to show that their movement is peaceful.

Some protesters sang the Lebanese national anthem while others called for the fall of the government.