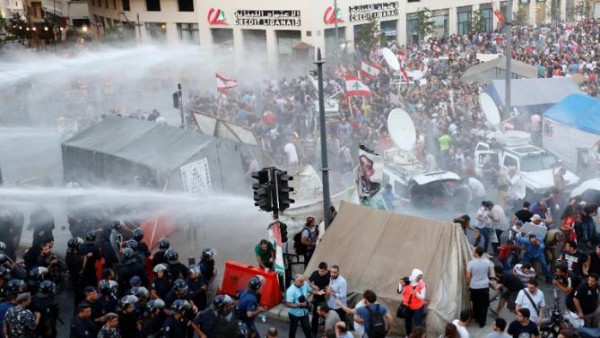 Police firing tear gas, rubber bullets and water cannons battled thousands of Lebanese protesters Saturday demonstrating against government corruption and political dysfunction amid a trash crisis, with the sound of gunfire echoing through the streets into the night.

Riot police used batons to beat back protesters among downtown Beirut’s Ottoman-era buildings and lavish apartment complexes, while others were carried away, overcome by tear gas. Private television station LBC reported police attacked one of its crew.

“The people want to topple the regime!” protesters cried out, a slogan used during the Arab Spring protests that swept through the region.

Lebanese Red Cross spokesman George Kattaneh told The Associated Press that at least 15 protesters were wounded, one of them in critical condition. He said the numbers likely would rise as security forces battled with protesters into the night. Police said 35 officers were wounded as they tried to disperse protesters trying to break into a security zone near parliament and the government building.

Saturday saw the biggest demonstrations by far since garbage began piling up on the streets after the capital’s main landfill was closed a month ago. An online group calling itself “You Stink!” and other civil society groups organized the rallies, calling on Lebanese to join them in a revolt against the corrupt system. They said they plan to stay in downtown Beirut near the government building and parliament.

“We want to live in our country,” read one poster carried by a protester. Another read: “Some trash should NOT be recycled,” written in red above photos of Lebanese politicians.

The government has been unable to find an alternative system for waste management, amid government paralysis and bickering among politicians.
Some residents have resorted to burning trash on the streets, sending toxic fumes over the city’s skyline and into homes. The health minister has warned of a catastrophe as some have started dumping trash in valleys, rivers and near the sea.

The protest began in Riyad Solh Square near the government building. Police fired tear gas and water cannons to beat back protesters after some of them tried to push through a security cordon. The protesters later moved to the nearby Martyrs’ Square and pledged to stay the night.

Heavy gunfire could be heard as the clashes continued. Interior Minister Nuhad Mashnouk, currently abroad, told the private Al-Jadeed television station that those who opened fire with live ammunition would be held accountable. He also pledged to resolve the trash crisis at next week’s Cabinet meeting.

It was not clear whether the snowballing protest movement would turn into something bigger. Lebanese have rarely taken to the streets unless it was for a political cause backed by a political party. Those behind recent protests have urged more people to join them.

The tiny, fragile country with a strong sectarian divide has managed to survive the Arab Spring uprisings that toppled Arab dictators, the onslaught by the Islamic State group in Syria and Iraq and the fallout from 1.2 million Syrian refugees now straining its economy.

But political disputes have kept the country without a president for more than a year. Parliament has extended its own term twice and has not convened because lawmakers differ on whether they can continue working before voting for a president.

Garbage started piling up in Beirut after July 17, when the main landfill for Lebanon’s capital was closed before officials had agreed on an alternative site.

An online group calling itself “You Stink!” and other civil society groups organized the rallies, calling on Lebanese to join them in a revolt against a corrupt system.

You Stink, an activist group that was born from Lebanon’s garbage and other civil society groups organized the rallies, calling on Lebanese to join them in a revolt against a corrupt system.

The garbage crisis has become a proxy for broader struggles amid the political paralysis in Lebanon that has prevented the election of a head of state since President Michel Suleiman’s term ended in May 2014.

On Saturday, protesters chanted slogans against the government and politicians.

“Some trash should NOT be recycled”, read one placard, above a pictures of Lebanese politicians.

The health minister warned this week that Lebanon could suffer a “major health catastrophe”.

The HRW group denounced the action by the police against the protesters.

“Violence has no role in responding to peaceful assembly and basic social demands,” said Nadim Houry, deputy Middle East director. “Lebanese authorities should respect the protesters’ rights and listen to their demands for a sustainable solution to the garbage crisis.”

International human rights standards limit the use of force to situations in which it is strictly necessary. The United Nations Basic Principles on the Use of Force and Firearms provide that law enforcement officials may only use force if other means remain ineffective or have no promise of achieving the intended result. When using force, law enforcement officials should exercise restraint and act in proportion to the seriousness of the offense and to the legitimate objective to be achieved.

The protesters  later erected tents near Martyrs’ Square, vowing to stay there until police release several activists they arrested during the protest.

A video shot by a protester on a mobile phone showed police opening fire at the demonstrators, which resulted in the injury of a young man in his waist.

Another man was heard shouting “killer” to a police officer.

Education Minister Elias Bou Saab told LBCI: “I am not honored to be part of this government.”

Al-Mashnouq is responsible for the  attack on the peaceful protesters, he said.

“This is a dark day in Lebanon’s history,” Bou Saab added.

Progressive Socialist Party chief MP Walid Jumblatt  ( who ordered all PSP participants in the protest to withdraw and who is famous for saying  in 2004“I would rather be a garbage man in New York than a political leader in today’s Lebanon”) , used stronger words, saying “enough lying.”

“Al-Mashnouq is responsible (for the use of force) and he should leave,” he added.

But al-Mashnouq said he is abroad and claimed that he has not asked police to open fire to disperse the protesters. He later ordered the release of  all detained protesters .

“unacceptable to deal with demonstrators this way.” He said

“All options are available,” he said when asked if the Phalange  ministers would resign from the cabinet.

MP Nabil Nicolas suspended his membership in parliament until the officials responsible for the use of force against demonstrators are held accountable. he said

Update :Al-Mashnouq will cut his trip abroad short and will be back in Lebanon on Sunday.