‘Hundreds of tonnes’ of cyanide at China blasts site: military 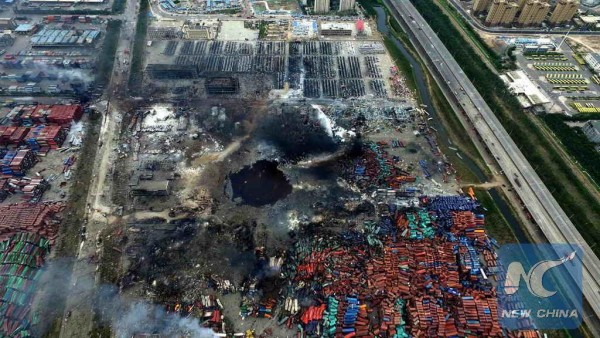 A huge hole is seen at the core area of Tianjin blasts in this aerial photo
Share:
Hundreds of tonnes of highly-poisonous cyanide were being stored at the warehouse devastated by two giant explosions in the Chinese port of Tianjin which killed 112, a senior military officer said Sunday.

The comments by Shi Luze, chief of the general staff of the Beijing military region, were the first official confirmation of the presence of the chemical at the hazardous goods storage facility at the centre of the blast.

The disaster has raised fears of toxic contamination and residents and victims’ families hit out at authorities for what they said was an information blackout, as China suspended or shut down dozens of websites for spreading “rumours”.

Nearly 100 people remain missing, including 85 firefighters, though officials cautioned that some of them could be among the 88 unidentified corpses so far found.

More than 700 people have also been hospitalised as a result of Wednesday’s blasts — which triggered a huge fireball and a blaze that emergency workers have struggled to put out since then, with fresh explosions on Saturday.

Shi, who is a general, told a news conference that cyanide had been identified at two locations in the blast zone. “The volume was about several hundreds of tonnes according to preliminary estimates,” he said.

A military team of 217 chemical and nuclear experts was deployed early on, and earlier Chinese reports said 700 tonnes of the highly toxic sodium cyanide were at the site.

Officials have called in experts from producers of the material — exposure to which the US Centers for Disease Control says can be “rapidly fatal” — to help handle it, and the neutralising agent hydrogen peroxide has been used.

Authorities have repeatedly sought to reassure the public, insisting that despite the presence of some pollutants at levels above normal standards, the air in Tianjin remains safe to breathe.

But the official Xinhua news agency reported late Saturday that cyanide density in waste water had been 10.9 times standards on the day following the explosions. It has since fallen but was still more than twice the normal limit.

Environmental campaign group Greenpeace said Sunday it had tested surface water for cyanide at four locations in the city and had not detected high levels of the chemical.

“These results show that local water supplies are not currently severely contaminated with cyanide,” it said, but pointed out that did not prove or disprove whether other hazardous chemicals were in the water.

Greenpeace reiterated its call for a comprehensive survey of hazardous chemicals in the air and water and for the results to be made public.

On Saturday a three-kilometre (two-mile) radius from the site of the blasts was evacuated, state-run media reported. Officials said later the reports were inaccurate, but barriers prevented access and people were seen leaving the largely devastated zone.

Tianjin residents, relatives of the victims and online commentators have slammed local authorities for a lack of transparency, including at one point trying to storm a news conference on Saturday.

On Sunday, sobbing men confronted security at the hotel where officials have been briefing journalists, with one shouting “Police, I will kill someone!” in what appeared to be a desperate bid to draw attention before being comforted by a policeman.

Another lashed out at reporters attempting to photograph him, saying: “Don’t take my photo, it is useless. The news has no truth!”

The government has moved to limit criticism of the handling of the aftermath, with a total of 50 websites having been punished for “creating panic by publishing unverified information or letting users spread groundless rumours”, according to the Cyberspace Administration of China.

Critical posts on social media have also been blocked, and more than 360 social media accounts have been suspended or closed down.

One poster on microblogging platform Sina Weibo wrote: “Why is it ‘rumours’ are flying everywhere every time there is a disaster? Are they really rumours?

“The government is lying… You have lied to the people too much and made yourself untrustworthy.”

Another poster added: “No freedom of speech. Words are blocked in various ways.”