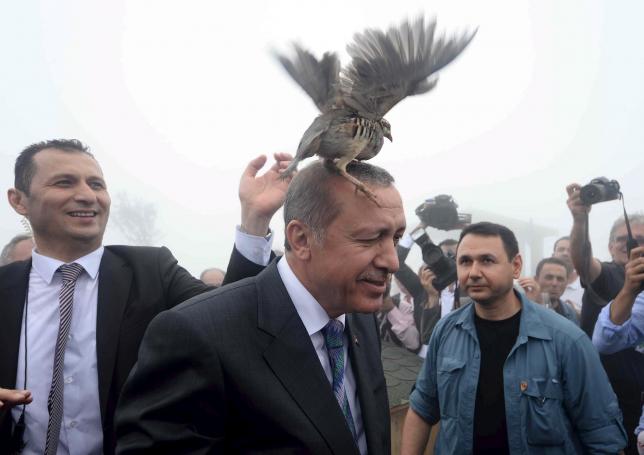 A grouse sits Turkish President Tayyip Erdogan’s head as he visits a facility of the Forest and Water Management Ministry in Rize, Turkey, August 14, 2015. REUTERS/Stringer
Share:

Turkey’s nationalist opposition made clear on Friday it would not roll over and back a minority government, making President Tayyip Erdogan’s aim of taking the country to a snap election with the ruling party in control look increasingly difficult.

Talks on forming a grand coalition between the AK Party and the main opposition CHP broke down on Thursday, making an autumn election almost inevitable and leaving the ruling party having to turn to the nationalist MHP for support.

The uncertainty comes as the NATO member faces a confluence of national security threats, battling Islamic State insurgents on its borders and Kurdish militants at home. The lira currency hit a record low on Friday and stocks were little recovered after sharp falls the previous session.

The AKP failed to hold onto its majority in an election on June 7, leaving it unable to govern alone for the first time since coming to power in 2002 and plunging Turkey into uncertainty not seen since the fragile coalitions of the 1990s.

Prime Minister Ahmet Davutoglu on Thursday urged parliament to call a new vote as soon as possible, apparently allow his government hoping for an agreement with the MHP that would to stay in power until the new election takes place.

But the MHP said it had no interest in propping up an AKP minority administration.

“That would be a minority government. We would reject this,” MHP vice chairman Mevlut Karakaya told Reuters, saying that unless the AKP was prepared to accept nationalist conditions for a full coalition, there was little point even negotiating.

That view was backed by MHP leader Devlet Bahceli in a statement late on Friday. Bahceli said he still hoped for a coalition but did not favor the idea of a minority government.

Davutoglu has until Aug. 23 to broker a deal or else Erdogan will have to call a new vote and an interim “election government” will be formed, with cabinet positions divided proportionally among the four parties in parliament.

“Erdogan does not want to go there, because that would mean power sharing, and holding the elections with a government not under AKP control,” said Sinan Ulgen, visiting scholar at Carnegie Europe and head of the Istanbul-based EDAM think-tank.

“That is his least-desired scenario.”

An “election government” would hand cabinet posts not only to the CHP and MHP, but also to the pro-Kurdish HDP. Senior AKP officials had been betting that the nationalists, virulently opposed to greater Kurdish political power, would do anything possible to avoid such a scenario.

But the MHP appears to be calling their bluff, arguing that such a power-sharing government would be required if no deal is reached, while it would refuse to serve alongside the Kurds and would turn down the posts allocated to it.

The political uncertainty handed the lira currency another battering, sending it to a record low for a second straight day, and prompting the central bank to step in and tweak some policy tools in an attempt to shore it up.

The lira is already one of the worst-performing major emerging market currencies this year, and analysts have said they expect further losses.

Davutoglu was due to meet with Bahceli at 1100 GMT on Monday, their offices said, although one senior AK Party official said there was little chance of the two parties reaching a coalition agreement.

The MHP has made the full abandonment of a peace process with Kurdish militants and curbing Erdogan’s influence over daily politics two of its core conditions, neither of which the ruling party is likely to compromise on.

“The coalition option doesn’t seem to be on the table due to the MHP’s attitude,” the AKP official said, describing a November election as the “most likely and realistic” option.

Erdogan is hoping that a new vote will enable the AKP to regain its majority. He has made no secret of his ambition to change the constitution and create an executive presidential system akin to France or the United States, a move that would be virtually impossible without a strong AKP majority.

Two recent polls have suggested the ruling party, whose roots are in Islamist politics, could recover its majority and govern alone if the vote were held again.

But as Turkish warplanes bomb Kurdish militant targets in northern Iraq and southeastern Turkey, it is unlikely to claw back much support from the Kurdish minority, meaning winning over religiously conservative nationalists will be key.

That is something MHP leader Bahceli knows all too well, strengthening his hand in the negotiations. Seeing Kurdish politicians in ministerial positions would be likely to enrage his core constituency, encouraging some to turn their backs on the AKP and bolstering his chances.

“They want to be able to criticize AKP and Erdogan from the sidelines … and use that in their election campaign. They actually want Erdogan to call early elections. That’s the MHP’s strategy, I think.”