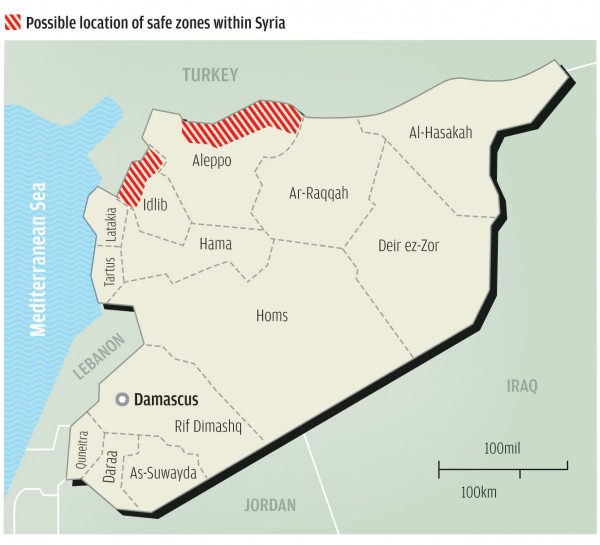 The al Qaeda-linked Nusra Front says it has quit frontline positions against Islamic State north of Aleppo and ceded them to other rebels, leaving an area of northern Syria where Turkey wants to set up a buffer zone.

A Nusra Front statement dated Sunday criticized a Turkish-U.S. plan to drive Islamic State from the Syrian-Turkish border area, saying the aim was to serve “Turkey’s national security” rather than the fight against President Bashar al-Assad.

The United States and Turkey last month announced their intention to drive Islamic State from a strip of territory in northern Syria near the Turkish border in a campaign that would provide air cover for Syrian rebels in the area.

Nusra said Turkey was acting to prevent the formation of a Kurdish state in northern Syria, and the Turkish government and the U.S.-led alliance against Islamic State were seeking to direct the battle according to their priorities.

“Facing this current scene, our only option was to withdraw and leave our frontline positions (with Islamic State) in the northern Aleppo countryside for any fighting faction in these areas to take over,” the Nusra Front said.

Syrian rebels taking part in the plan as ground forces were not doing so voluntarily, it added.

The Nusra Front said it would maintain frontlines with Islamic State in other areas including Hama province and the Qalamoun mountain range at the border with Lebanon.

The planned buffer would prevent a powerful Syrian Kurdish militia, the YPG, from further expanding a zone of control that already stretches some 400 km (250 miles) along the Syrian-Turkish border. The YPG has seized wide areas of territory from Islamic State this year, backed by U.S.-led air strikes.

Insurgent sources said Nusra had handed over two villages north of Aleppo to an alliance of rebel groups operating in the area known as Jabhat al-Shamiya, or the Levant Front.

The Nusra Front is one of the most powerful insurgent groups fighting in the four-year-long Syrian war that has estimated to have killed a quarter of a million people and largely reduced Assad’s control to the cities of western Syria.

Nusra has been a major force behind insurgent advances in northwestern Syria this year. Turkish support for the rebels has been crucial throughout the conflict. Assad last month said Turkey had intervened directly to assist insurgents who advanced in the northwest earlier this year.

Insurgent groups including the Nusra Front escalated an attack on some of the last government-controlled areas in the northwestern province of Idlib province on Monday.

Opposition-affiliated media broadcast images of a large explosion targeting government forces in the village of al-Foua.

The Syrian Observatory for Human Rights, a UK-based group that tracks the war using sources on the ground, reported heavy fighting between rebels including the Nusra Front, and pro-government forces it said were led by Lebanon’s Hezbollah, an Iranian-backed Shi’ite group fighting alongside the Syrian army.

State TV said pro-government forces “continued their resistance” to the attack on al-Foua and nearby Kefraya, which both have Shi’ite populations.

Insurgents are also pressing a separate offensive in Sahl al-Ghab, an agricultural plain of vital strategic importance to Assad because of its proximity to the city of Hama and the coastal mountains that are home to his Alawite sect.

Rami Abdulrahman, who runs the Observatory, said insurgents now controlled around half of Sahl al-Ghab.