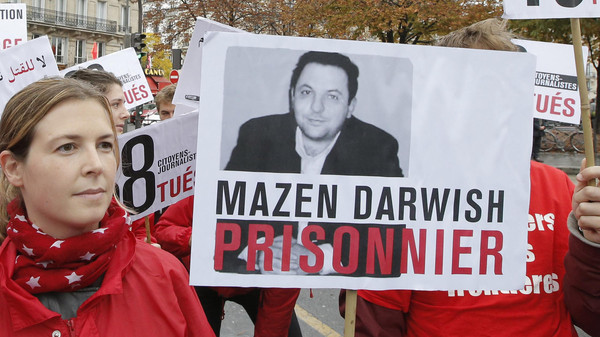 Lucie Morillon, head of research at French watchdog of Reporters Sans Frontieres (Reporters without Borders) holds a banner depicting Syrian human rights activist Mazen Darwish during a protest against violence in Syria, in Paris, Saturday, Oct. 20, 2012. Lakhdar Brahimi, the international envoy to the Syria conflict pressed his call for a cease-fire with Syrian officials during a visit to Damascus on Saturday while violence continued throughout the country unabated. (AP Photo/Francois MoriSyrian Center for Media and Freedom of Expression
Share:
By ZEINA KARAM and BASSEM MROUE
Syrian authorities on Monday released an award-winning human rights activist after more than three years in jail in a rare goodwill gesture by President Bashar Assad’s government amid intense diplomatic maneuvering to end the country’s civil war.

The release of Mazen Darwish was welcomed by activists as a positive development amid Syria’s daily carnage. An outspoken critic of the government’s crackdown on protests that erupted against Assad’s rule in March 2011, he became a symbol of the battle for human rights in Syria following his detention less than a year later.

Amnesty International said Darwish should never have been jailed in the first place and called on the government to halt its campaign targeting those who dare speak about the “appalling human rights violations” in Syria.

Darwish was the director of the Syrian Center for Media and Freedom of Expression when he was arrested in February 2012 in a Damascus security raid, along with two of his colleagues, Hani al-Zitani and Hussein Gharir. The organization confirmed his release on Monday but said he is still standing trial and is scheduled to attend a court hearing on Aug. 30. His two colleagues were released last month.

“After an arbitrary arrest that lasted three years, five months, and 23 days, Mazen Darwish has been released from prison today,” the group said in a statement.

There was no immediate comment from the government, which continues to hold thousands of political prisoners, according to human rights groups.

The Syria that Darwish steps into when he leaves prison is drastically different than the one he knew more than three years ago. What began as an Arab Spring-style uprising against Assad’s rule became a full-blown civil war and the country has sunk into chaos.

The conflict, now in its fifth year, has killed at least 250,000 people, wounded more than a million and displaced half the population, according to the United Nations. The Islamic State group, which emerged almost two years ago (??? Is this right) as an al-Qaida splinter group and is now its main rival, has seized about a third of both Syria and Iraq.

Darwish’s release comes amid stepped-up diplomatic activity aimed at finding a political way out of the conflict.

Assad’s main backers, Russia and Iran, are trying to set the stage — following the Iran nuclear deal — for a political transition in Syria. The U.S. and Saudi Arabia also appear to be more inclined to engage with the Iranian-backed government of Assad on ways to end the war. Although he still clings to power and is unlikely to step aside, Assad’s enormous territorial losses may also be pushing him to explore diplomatic options to resolve the crisis.

It was not clear if Darwish’s release was directly related to the diplomatic activity. He has been standing trial on charges of “promoting terrorist acts,” and his organization said his release followed an amnesty issued last month by Assad that supposedly covered his case. But he still has to appear in court end of the month.

“Darwish and his colleagues should never have been in jail in the first place. His release today is long overdue, but comes as a welcome relief after three and half years of anguish and uncertainty,” said Said Boumedouha, chief of Amnesty’s Mideast and North Africa program.

“The Syrian authorities must drop all charges against Mazen and his colleagues and end their relentless campaign to target anyone who dares to speak out about the appalling human rights violations in the country,” added Boumedouha.

Well-known opposition figure Kamal Labwani, who spent long years in jail in Syria and now lives in Sweden, said Damascus used Darwish as “a hostage” in order to portray his release as a goodwill gesture.

“A good will gesture for what,” Labwani said over the telephone. “His right was to be free.”

Mahmoud Merei, who heads the Arab Organization for Human Rights, said the release was a “good step.” Speaking by telephone from Damascus, Merei said “political detention should end in Syria and we hope that this decision will be followed by similar ones.”

International human rights and press freedoms organizations, including the New York-based Committee to Protect Journalists and Amnesty International have long called on the Syrian government to release Darwish. The United Nations also called for his release.

In February, 71 human rights groups called on the Syrian government to immediately free Darwish and his colleagues. Their joint statement came on the third anniversary of their arrest and described Darwish’s trial as “nothing more than a sham and a deep miscarriage of justice.”

In April, Darwish won the UNESCO’s World Press Freedom Prize in recognition of the work that he has carried out in Syria “for more than 10 years at great personal sacrifice, enduring a travel ban, harassment, as well as repeated detention and torture.”

In October 2014, Indian-born author Salman Rushdie shared the 2014 PEN Pinter International Writer of Courage Award with Darwish. According to the Syrian Center for Media and Freedom of Expression, Darwish is also the winner of the Reporters Without Borders award in 2013.