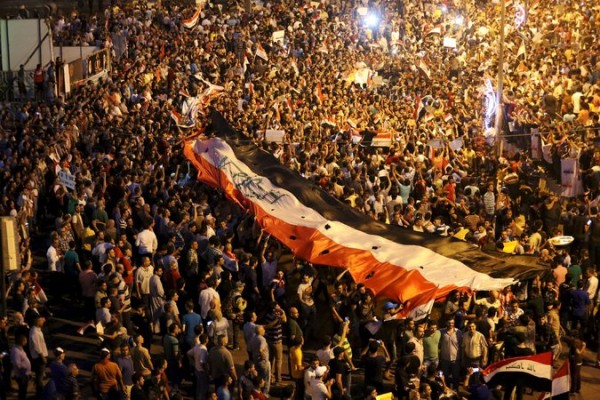 Facing widespread protests against government corruption and poor services, as well as a crucial call for change from the country’s top Shiite cleric, Prime Minister Haider al-Abadi proposed on Sunday to radically reshape the dysfunctional political system of Iraq that has been entrenched since the American-led invasion in 2003.

The proposals, which came as the war against Islamic State militants has stalled in western Anbar Province, are wide-ranging and include a new corruption inquiry and the elimination of what has been a hallmark of the American-imposed system: sectarian and party quotas in the appointment of top officials. Dramatically, Mr. Abadi also vowed to eliminate the three vice presidency positions, largely ceremonial jobs that come with expensive perks.

Those jobs are currently held by three figures who have dominated Iraqi politics since the United States toppled Saddam Hussein’s regime: the former prime minister Nuri Kamal al-Maliki, a Shiite; Ayad Allawi, a Shiite whose Sunni-dominated bloc won the most seats in national elections in 2010; and Osama al-Nujaifi, a prominent Sunni Arab leader.

“We are witnessing the end of the post-2003 Iraq,” said Maria Fantappie, the Iraq analyst for the International Crisis Group.

Mr. Abadi has the backing of the Iraqi public — protesters gathered in Baghdad on Sunday in support of Mr. Abadi — and Grand Ayatollah Ali al-Sistani, the country’s top Shiite cleric who holds enormous sway over the country’s Shiite population. With the proposal, Mr. Abadi, in swift fashion, has shifted the narrative that had grown around him, portraying him as a weak and ineffectual, if well-meaning, leader.

Mr. Abadi became prime minister last year after calls by the international community for a more inclusive leader to replace Mr. Maliki in the face of the threat by the Islamic State, the militant group that seized on the resentments of the Sunni community to capture territory in Iraq’s north and west.

The proposals were greeted with statements of support across the political spectrum, including from Mr. Maliki and Mr. Nujaifi, a reflection of the mandate that Mr. Abadi has received from both the demonstrators and Grand Ayatollah Sistani, whose representative called for change in an important sermon on Friday. The reform plan was immediately approved Sunday afternoon by Mr. Abadi’s cabinet, but some of the measures, including the elimination of the vice presidencies, need to be approved by Parliament, which is scheduled to vote on the proposals on Tuesday.

“It’s the boldest we have ever seen Abadi act,” said Ahmed Ali, an Iraq expert and senior fellow at the Institute of Regional and International Studies at the American University of Iraq, Sulaimani, in the Kurdish region of northern Iraq. “He had not been decisive up to this point.”

The protests, which began in recent weeks in the searing heat of Iraq’s summer over the lack of electricity to power air-conditioners while temperatures have consistently been above 120 degrees Fahrenheit, grew into a wide-scale rebuke of corruption and an ineffective political system.

Ms. Fantappie, who recently visited Iraq, said there was a palpable sense of grievance among the public. “There is a really strong and growing sentiment of mistrust among the Iraqi public against the political class,” she said.

The Shiite religious leaders, collectively known as the marjaiya, in the holy city of Najaf quickly backed the protest movement, which seemed to emerge as a grass-roots effort rather than from a political party, forcing Mr. Abadi to act.

“After putting the trust in God and responding to the faithful calls of the marjaiya, which has drawn clear lines to activate political and administrative reforms, and to respect our beloved people’s will in achieving their legitimate demands, I submit these procedures before the cabinet,” Mr. Abadi said on Sunday in a written statement.

With Iraq facing a financial crisis as oil prices drop, Mr. Abadi also said he would make drastic cuts in government jobs and some ministries, eliminate three deputy prime minister positions as well as the vice-presidential posts and reduce the perks of politicians, including the large and expensive security details that many have long felt entitled to. The proposal goes to the heart of grievances expressed in the peaceful rallies in Baghdad and other cities in the south of Iraq.

Mr. Abadi’s seven points of reform, which he released on Facebook and his official website on Sunday and include reopening corruption cases against top officials, seemed to transcend the particulars and represent a wide statement of rebuke against the entire political system that has taken root since the American invasion. Notably, Mr. Abadi pushed for the elimination of one of the system’s hallmarks: the quotas used in the selection of top officials.

In acting so decisively, Mr. Abadi strengthened his position in Iraq’s political scene, but analysts note that his government is only one of the country’s power centers. The other is an assortment of Shiite militias and their leaders, including Hadi al-Ameri, who leads the Badr Organization and has close ties to Iran. These groups have proved far more effective in fighting the Islamic State than the army, and they have been immensely popular among the Iraqi public.

Mr. Ali said that in eliminating so many government jobs, including that of the Sunni vice president, and promising to abolish sectarian quotas, Mr. Abadi risks further marginalizing Iraq’s Sunni Arab minority, whose disenchantment with the policies of Mr. Maliki’s government played a critical role in the rise of the Islamic State, also known as ISIS or ISIL. For now, though, that risk has been overshadowed by the risk of doing nothing in the face of public unrest and the calls from the influential Shiite religious leaders.

Crucially, Mr. Nujaifi and Salim al-Jubouri, the Sunni speaker of Parliament, said they supported the proposals. Still, much of Iraq’s Sunni population lives in territory controlled by the Islamic State, with little connection to politicians in Baghdad.

With the fight against the Islamic State, Mr. Ali said, it will be crucial to “convince Sunnis that this in their interest.” He added, “These are revolutionary steps for the Iraqi political system.”

Another open question is how Mr. Maliki, who fought to the end last year to stay prime minister and has worked behind the scenes to undermine Mr. Abadi in a bid to return to power, will react if he is stripped of his perks, particularly his ample security detail. While he has publicly backed the proposal, many people point to the support he still enjoys within the Dawa Party, the Islamic party that Mr. Abadi is also a member of, and say he will not go quietly.

“Even if he is removed, he won’t be out of the picture,” Mr. Ali said.

Still, the scenes of peaceful protests followed now by meaningful gestures of change have given many hope that political change can finally upend more than a decade of corruption, violence and ineffectual government.