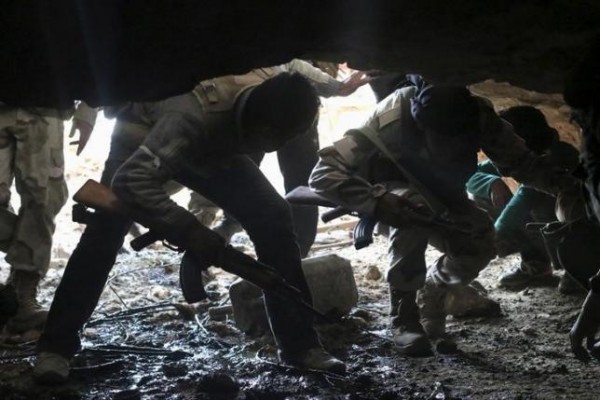 Free Syrian Army fighters enter a cave after what they said was a barrel bomb dropped by forces loyal to Syria’s President Bashar al-Assad near Tal Meleh village in Hama countryside May 12, 2015. Picture taken May 12, 2015. REUTERS/Mohamad Bayoush
Share:

Insurgents have regained control of several villages in northwest Syria from government forces and have advanced beyond them, edging closer to a coastal stronghold of President Bashar al-Assad, a monitoring group and other sources said on Sunday.

The insurgents launched a counter-offensive after government forces, backed by allied militant groups, last week recaptured the villages on the Sahl al-Ghab plain, which lies close to the city of Hama and is crucial to the defense of coastal mountains that are the heartland of Assad’s minority Alawite sect.

On Sunday, the Britain-based Syrian Observatory for Human Rights said the Islamist fighters’ counter-offensive had forced the Syrian army to withdraw from such villages as Mansoura, Zeyara and Tal Waset toward bases northwest of Hama city.

Seven government warplanes and helicopters carried out 80 strikes on the villages located on the plain, the Observatory added.

A source close to the Syrian government confirmed the rebel advances in the area.

The insurgents have made gains in several parts of Syria in recent months, including capturing most of Idlib province to the northeast of the Sahl al-Ghab plain.

A quarter of a million people have died and more than 10 million driven from their homes in Syria’s four-year civil war that has left large swathes of the country in the hands of Islamic State militants.