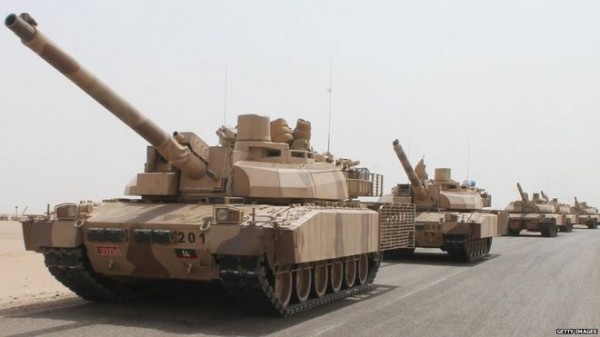 Saudi Arabia and its allies have been targeting Yemeni rebels for months
Share:
By Frank Gardner

Something is stirring in Saudi Arabia. Gone is the historically conservative, don’t-rock-the-boat, tip-toeing approach to the big, strategic issues of the Middle East.

In its place has come a new, assertive attitude that is seeing the oil-rich kingdom set off on previously untried and potentially risky ventures.

In Yemen, the Saudi military has now been at war with Houthi rebels for more than four months.

In Syria, Saudi patronage for Islamist rebels opposed to the government of President Bashar al-Assad has been stepped up dramatically – and, on the Iran nuclear deal, well-placed Saudi sources have let it be known that if they assess Tehran as likely to acquire nuclear weapons in the future, then Saudi Arabia will go down the same path, triggering a Middle Eastern arms race.

So, what’s behind this?

Jeddah, September 2013, and I am sitting in an air-conditioned reception room in a well-guarded palace, close to the shores of the Red Sea.

There are only two other people in the room, Crown Prince – now King – Salman Bin Abdulaziz al-Saud and his most favoured son, Prince Mohammed Bin Salman.

On that day, Prince Salman was still 16 months away from succeeding his brother King Abdullah to the throne.

But as the country’s defence minister, he had just rushed back from holiday in Morocco to take charge of Saudi forces, which were then poised to support the Americans in launching punitive missile strikes on Assad.

The missile strikes were supposed to be an international response to the widely-held belief that the Syrian regime was behind the massive nerve gas attack at Ghouta that summer, which killed hundreds of Syrian civilians.

But thanks to a Russian-brokered deal that saw Assad give up his chemical arsenal – or most of it – the missile strikes were called off at the eleventh hour.

For the Saudi leadership, this was a seminal moment and a turning point in its dealings with the US.

The Saudis felt utterly let down by their long-time American allies. They had been hoping that combined international military action against the Assad regime would finally turn the corner in that country’s civil war, removing Iran’s only allied Arab ruler, President Assad, and replacing him with a Sunni-led government.

When this did not happen, the senior Saudi princes and decision-makers resolved that, from then on, they would have to take matters into their own hands.

At about 30 years old, he is possibly the world’s youngest defence minister.

He is also the visible face of the massive Saudi-led military campaign to push back the Shia Houthi rebels in Yemen and restore the exiled President Hadi, a Saudi ally, to power.

In Saudi news bulletins, the tall and often unshaven Prince Mohammed can be seen visiting operations rooms, inspecting plans, conferring with his generals.

To the surprise of many, his gamble appears to be paying off, although the hapless Yemeni population has paid a heavy price.

After four months of relentless pounding of Houthi positions with airstrikes, the blockading of Yemeni ports and airports and the landing in Aden of an entire UAE armoured brigade, the Houthis are now on the back foot.

Despite an estimated 3,000 people killed and 80% of the Yemeni population now reliant on aid, the Saudi leadership appears determined to see the campaign through and force the Houthis to sue for peace.

For Saudi Arabia, this is about more than just securing its southern flank.

The Saudis fear they are being steadily encircled by Iranian allies and this is something they want to reverse.

In Yemen they see the Shia Houthis as being a proxy militia for Iran, although in reality the Houthis owed their earlier gains to support they got from the ousted former President Saleh, not the Iranians.

In Iraq, they have watched in dismay as the Sunni regime of Saddam Hussein has given way to a Shia-led government with extremely close ties to Tehran. Iranian-trained militias were instrumental in helping Iraq retake the town of Tikrit from IS.

In Syria, the Saudis see Iran’s proxy, Hezbollah, battling Sunni rebels – and in Bahrain and their own eastern province, they have long suspected Iran’s Quds Force of encouraging unrest amongst the Shia population.

So how will this end? Badly, say Saudi Arabia’s detractors.

They think the country is over-reaching itself and backing some dangerous players in places like Syria, feeding into a wave of Sunni jihadism that will bring more violence from IS supporters to the streets of Saudi Arabia, as well as elsewhere.

But some seasoned observers who have been watching the newfound Saudi assertiveness say that, in the wake of the disastrous Arab Spring that has brought such misery to much of the Arab world, Saudi Arabia had no choice but to look after its own interests, form its own alliances and forge its own path, irrespective of what Washington is up to.