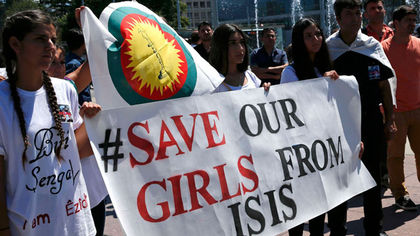 Women hold a banner during a demonstration marking the first anniversary of Islamic State’s surge on Yazidis of the town of Sinjar, in front of the United Nations European headquarters in Geneva, Switzerland, August 3, 2015. REUTERS/Denis Balibouse
Share:

The ISIS militant group has executed 19 women in its Iraqi stronghold of Mosul for refusing to have sex with fighters, a Kurdish official has claimed.

Said Mimousini, a spokesperson for the Kurdistan Democratic Party (KDP), said that ISIS’s treatment of women and dealings with money were proving to be increasingly divisive within the organisation’s own ranks.

The official said that the executions, which could not be independently verified, took place during the weekend of the 1 and 2 August.

“ISIS (has) executed 19 women in the city of Mosul during the past two days,” he told Iraqi News on Monday. “The penalty decision came on the background of the refusal to participate in the practice of sexual jihad.”

Mimousini’s claims come just days after a UN official said she had witnessed the circulation of a child slave “price list” among Isis fighters in Syria and Iraq.

Zainab Bangura, the UN’s Special Representative of the Secretary-General for Sexual Violence in Conflict, told Bloomberg that girls get “peddled like barrels of petrol”, and are sometimes bought so they can be sold to their families for thousands of dollars in ransom money.

Meanwhile on Thursday, ISIS was reported to have seized a key town in central Syria following a period of heavy skirmishes with government forces.

The densely populated town of Qaryatain represents the most significant strategic gain for the militant group since it took the historic city of Palmyra, not far to the northeast.

Lying 85km (50 miles) from Homs, it gives ISIS a clear route to link up areas it controls in and around Palmyra with the eastern countryside of Qalamoun in Damascus province, Associated Press reported.

News that Qaryatain had fallen came from the UK-based Syrian Observatory for Human Rights, which said the group took the town after three suicide bombers hit army checkpoints at the entrance the day before.

Isis supporters online appeared to corroborate the fact Qaryatain had been taken, while a Facebook page which regularly posts news on Isis military activities posted photos claiming to show fighters and a captured tank “liberating” its streets.

The advance came after a string of military setbacks for Isis that followed its victory in Palmyra. In June, Kurdish fighters and their local allies expelled the group from the key northern border town of Tal Abyad, cutting off one of its major supply routes.