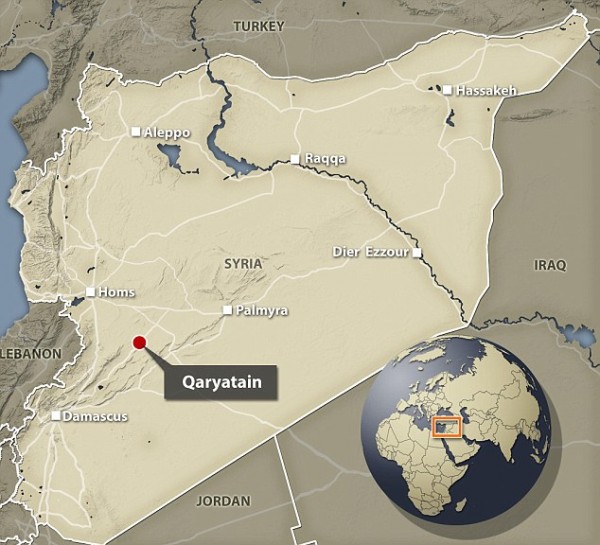 Hundreds of Christian families have fled a central Syrian town as Islamic State fighters advance toward it, activists said Saturday, the anniversary of the U.S. beginning airstrikes against the extremists in Iraq.

A U.S.-led coalition has conducted nearly 6,000 airstrikes against the Islamic State group, expanding its operations to target the extremists in Syria as well. But a year later, the Islamic State group remains able to launch attacks across its self-declared “caliphate” in both countries, despite some gains by Kurdish fighters and allied Iraqi forces.

Meanwhile, searches continued in Egypt for a missing Croatian hostage that an Islamic State affiliate had threatened to kill.

On Saturday, Osama Edward, the director of the Christian Assyrian Network for Human Rights in Syria, said “hundreds of families” have fled the Christian town of Sadad toward the government-held central city of Homs and the capital, Damascus.

Qaryatain lies in the middle of a triangle formed by the cities of Homs, Palmyra and Damascus. Activists say it has a mixed population of around 40,000 Sunni Muslims and Christians, as well as thousands of internally displaced people who earlier fled Homs.

The Britain-based Syrian Observatory for Human Rights said Saturday’s fighting concentrated in an area between Qaryatain and the village of Mheen, which is halfway to Sadad. The Observatory said Syrian troops shelled the area and government warplanes conducted several airstrikes on areas outside Qaryatain.

Sadad was captured briefly in 2013 by members of al-Qaida’s Syrian affiliate, the Nusra Front, and was retaken later by government forces.

“People are living in fear in the area,” Edward said. He said many Christians around Sadad fear what happened to ethnic Yazidis in Iraq and other Christians in Islamic State-controlled territory could happen to them: Choosing between fleeing, converting to Islam or facing death. The threat to Yazidis in Iraq prompted U.S. President Barack Obama to begin U.S. airstrikes targeting the Islamic State group in Iraq on Aug. 8, 2014.

Activists said the Islamic State group abducted 230 residents, including dozens of Christians, from Qaryatain in recent days. Activists say some Christians were released, though the fate of the others is still unknown.

Christians make up about 10 percent of Syria’s prewar population of 23 million people.

In February, Islamic State fighters kidnapped more than 220 Assyrian Christians after overrunning several farming communities on the southern bank of the Khabur River in the northeastern province of Hassakeh. Since then, only a few have been released and the fate of the others remains unknown.

In Egypt, police searches and diplomatic efforts have intensified to find 30-year-old Tomislav Salopek, a Croatian kidnapped July 22 in Cairo. The Islamic State group’s Egyptian affiliate said Wednesday that it would kill Salopek in 48 hours if the Egyptian government did not release jailed “Muslim women” — a reference to those detained in the government’s crackdown on supporters of the Muslim Brotherhood and other Islamists.