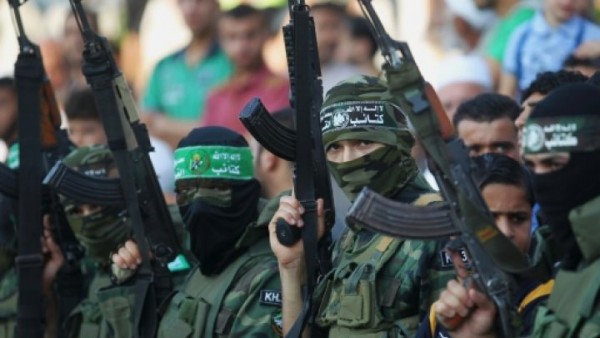 Palestinian youths at a summer camp organised by the Ezzedine al-Qassam brigades, the armed wing of the Hamas movement, on August 5, 2015, in Khan Yunis, in the southern Gaza Strip
Share:
Hamas called Saturday for “open and comprehensive confrontation” with Israel after the father of a Palestinian toddler killed in a firebombing by Jewish extremists last week died of his burns.

“Nothing will stop these murderous settler attacks and… we cannot wait until they come into our villages and our homes,” Hamas spokesman Hossam Badran wrote on Facebook from his base in Qatar.

“Our people in the West Bank have only one choice: that of open and comprehensive confrontation against the occupation.”

Saad Dawabsha died earlier on Saturday in hospital in the southern Israeli city of Beersheba where he was being treated for third degree burns, Palestinian official Ghassan Daghlas said.

Dawabsha’s wife Riham Dawabsha and four-year-old son Ahmed are still fighting for their lives in hospital after the arson attack which killed 18-month-old Ali on Friday of last week.

The family’s small brick and cement home in the occupied West Bank village of Duma was gutted by the fire and a Jewish Star of David spray-painted on a wall along with the words “revenge” and “long live the Messiah”.

Prime Minister Benjamin Netanyahu condemned the attack as “terrorism in every respect”, and vowed to spare no effort in bringing the perpetrators to justice.

He ordered a crackdown on Jewish extremism that has seen three suspects detained.

Israeli public radio reported on Saturday that the army was on the alert for possible unrest in the West Bank and for “Palestinian revenge attacks.”
FRANCE 24/AFP