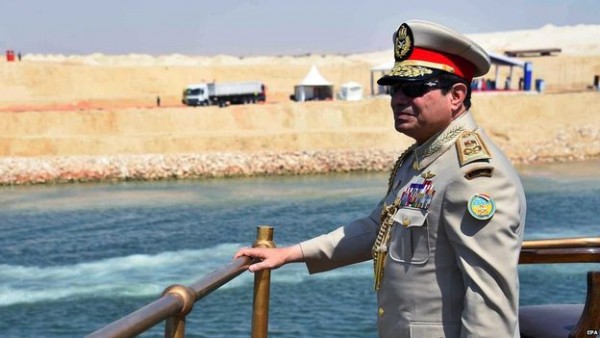 Egypt received a show of international support on Thursday as it inaugurated a major extension of the Suez Canal which President Abdel Fattah al-Sisi hopes will power an economic turnaround in the Arab world’s most populous country.

The former armed forces chief, who led a military takeover two years ago but ran for president as a civilian last year, told a ceremony attended by French, Russian, Arab and African leaders that Egypt would defeat the terrorism that dogged the project.

“Work did not take place in normal circumstances, and these circumstances still exist and we are fighting them and we will defeat them,” Sisi said after signing an order allowing ships to cross the New Suez Canal.

“We promised a gift to the world and we accomplished it in record time – an additional artery for prosperity and for connecting civilization to enhance the movement of international trade,” he said, as the first vessel, a container ship called CMA CGM TITAN, blew its horn and passed through the canal.

The $8 billion project was completed in just one year instead of three on Sisi’s orders, but economists and shipping analysts question whether there is sufficient traffic and east-west trade to meet its ambitious revenue targets.

The canal expansion is the centerpiece of a grand agenda by Sisi to cement his tenure as the man who brought stability and prosperity to Egypt after he ousted elected Muslim Brotherhood President Mohamed Mursi in 2013 following mass protests.

The inauguration ceremony was also intended to bolster his international standing in the presence of French President Francois Hollande, Russian Prime Minister Dimitry Medvedev, King Abdullah of Jordan, the emir of Kuwait and the king of Bahrain.

U.S. Secretary of State John Kerry was in Cairo on Aug. 2 for a strategic dialogue with Egypt, but no top-level representative of the Obama administration attended the ceremony. Ambassador Robert Beecroft and Darrell Issa, a Republican U.S. Representative from California, attended.

Egypt’s allies are keen to burnish its image in a region beset by turmoil. Cairo too faces an increasingly brazen two-year-old insurgency based across the Suez Canal in the Sinai peninsula that has killed hundreds of police and soldiers.

In an ominous turn, Islamic State’s Egyptian affiliate released a video on Wednesday threatening to kill a Croatian hostage within 48 hours if Muslim women prisoners were not freed. Last month, the group managed to fire a rocket at an Egyptian navy vessel in the Mediterranean, near the coast of Israel and the Gaza Strip.

But Egyptian authorities say the safety of ships through the strategic canal has never been under threat.

Earlier Sisi, in full military regalia, sailed up the canal, flanked by a young boy in military fatigues waving the Egyptian flag, aboard the yacht El-Mahrousa, the first ship to pass through the Suez Canal when it was opened in November 1869.

Thursday was declared a public holiday. Cairo and other cities were decked out in bunting, with fairy lights hung from the Nile river bridges and banners proclaiming “From the mother of the world (Egypt) to the whole world”.

Tents for the festivities in Ismailia were erected on the east bank of the canal. A giant statue of a toiling canal worker with shovel in hand looked over the waterway. A towering statue of the ancient Egyptian Pharaonic goddess Isis with wings splayed looked out over the new channel, with the flags of the world flying behind it. Nationalist songs by military brass blared.

Sisi was to host a lavish dinner later on Thursday and guests were to be treated to Verdi’s Opera Aida.

The yacht was an ambivalent symbol, since King Farouk, the last monarch to rule Egypt, sailed into exile in Italy aboard it after being ousted by the military in 1952.

Egypt had been reeling from years of turmoil since the Arab Spring uprising that deposed autocrat Hosni Mubarak in 2011, and many of the country’s nearly 90 million population have suffered from a slower economy, a fall in tourism and high inflation.

The government believes the New Suez Canal and an industrial zone to be developed around it will seal Egypt’s deliverance from economic purgatory – to the skepticism of some.

The project involved extending a waterway parallel to part of the 19th century canal connecting the Mediterranean to the Red Sea, as well as deepening and widening the old channel – the shortest shipping route between Europe and Asia.

In Cairo’s Tahrir Square a crowd of about 300 gathered in the square honking horns with the color of the Egyptian flag.

“This isn’t just for me, it’s for my children and grandchildren. This is for the whole world,” said 50-year-old Gamal Amin.

But not everyone was enthralled. “There isn’t anything new to be celebrating. There are more important things for Egyptian people that this money could have been used for,” said Mahmoud, 24, walking past Tahrir. 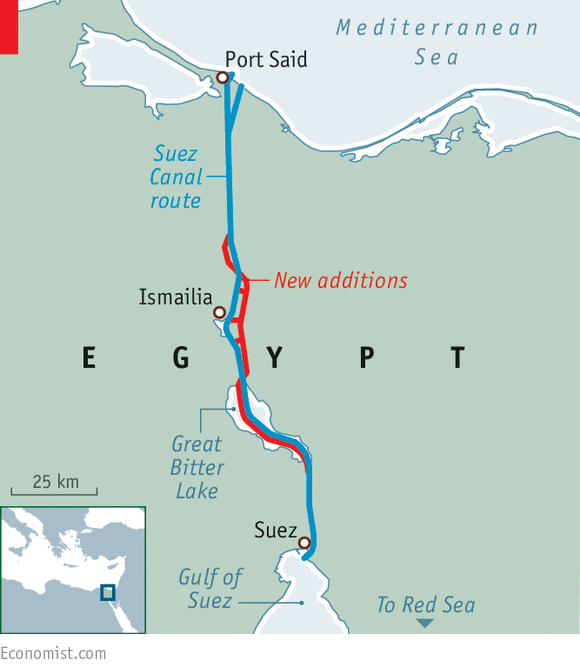 For many Egyptians, as well as economists and experts, the immediate benefits of the expansion, funded largely by a public subscription in Egypt, are not obvious.

The Suez Canal Authority expects a windfall of additional revenue — $13.23 billion in annual revenue by 2023 from just over $5 billion in 2014, with the number of daily vessels rising from 49 to 97 over the same period.

But sluggish world trade, competition from an expanded Panama Canal and a slower Chinese economy make it unlikely the project can achieve its revenue targets anytime soon or bring about a significant fall in unemployment from about 13 percent.

Some economists have branded the projections ‘wishful thinking’ especially since Suez Canal revenue growth has failed to keep pace with growth in world trade since 2011.

But British Defense Secretary Michael Fallon praised the project as a “modern wonder”. Britain, Egypt’s former colonial power, France and Israel launched an ill-fated attack on Egypt after Nasser nationalized the canal in 1956, but were forced to withdraw largely due to U.S. and Soviet pressure.