This is not Islam’: Refugees fleeing ISIL capital in Syria say 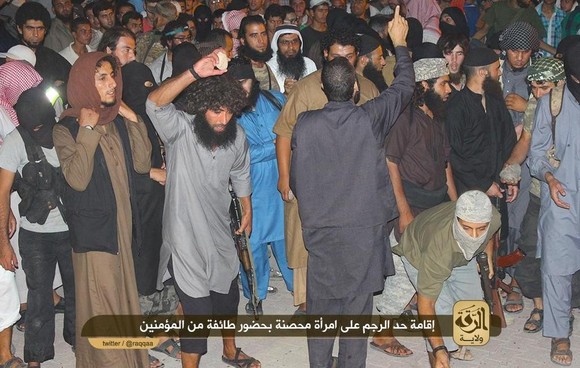 Woman stoned to death in Raqqa by ISIS militants
Share:

In the Syrian capital of the Islamic State and the Levant’s self-declared caliphate, Raqqa, the group’s extreme interpretation of Sharia law is enforced through extraordinary punishments, including death. The list of potential violations is long and reminders of the consequences of crossing the groups are on constant display, with executed and beheaded men displayed in public squares and roundabouts, their crimes often detailed in notices pinned to their corpses.

And even so, some say the chaos and destruction that characterizes most of Syria after four years of war is such that the comparative calm in Raqqa resulting from ISIL’s strict governance actually offers a respite.

Those who recently fled from Raqqa to Turkey describe a new form of governance taking root as ISIL, also known as ISIS or Daesh, continues its effort to entrench itself into the social fabric of the capital. Despite daily bombardment from U.S.-led coalition airstrikes on the city, ISIL has managed to expand its reach both geographically and socially, taking control of even the minute details of everyday life.

The group has restored electricity supply, painted road signs, imposed taxes, implemented a new education system and operates a highly functional — albeit punitive and brutal — judicial system. The organization now controls about one-third of the country, and rules over millions of people across Syria and Iraq. The group has commandeered oil refineries and gas fields in the desert terrain, helping to finance its operations.

ISIL police battalions made up of mostly foreign fighters patrol the streets in 4×4’s and on foot, also setting up checkpoints across the city to inspect identification documents and report any violations to the strict code. Residents must provide tax receipts, proving they have paid the mandatory portion of their agricultural or retail dividends to the state, in order to cross.

Billboards, road signs and administrative buildings have been painted with the black flag of the Islamic State. ISIL has issued new drivers licenses, with the black ISIL logo on the back, and conducts driving tests. Armed traffic police issue fines and penalties for traffic violations.

Dress code is strict. Police inspect the length of men’s beards, with violent penalties including public lashings, or imprisonment enforced for those that are too closely shaved.

“They will stop you in the street and tell you your beard is too short. They will even demand to know where you shaved, and may go and arrest that barber!” said Sarmad Al-Jilane, an anti-ISIL activist with the Raqqa is Being Slaughtered Silently group, who is now living in Gaziantep.

Women must wear the full-length black burqa, complete with niqab and gloves. Female ISIL battalions are deployed to streets and schools to monitor and report any violations of the dress code. Many women have ceased to leave the house.

“My wife didn’t leave the house for six months,” said Mohammed Khedr, now an activist with the Turkey-based Sound and Picture Organisation, which documents human rights violations committed by the group through a network of activists and reporters on the ground.

A graphic designer and advertising professional, Khedr risked his life to print and distribute anti-ISIL leaflets and posters around Raqqa before being forced to flee after the group attempted to co-opt his skills for its propaganda newspaper in April.

“They broke into my house and basically arrested me, telling me I must design a logo for their new news agency, ‘Euphrates News Agency,’ Khedr said. “They offered me a lot of money.”

“I asked for three days to consider it and in that time I arranged to flee to Turkey. I was afraid of retribution against my family once they discovered I had escaped.”

The new regime has banned some American products, including Apple phones, and publicly burned cigarettes and other forbidden items. Khedr said that in Raqqa, he smoked indoors for fear of being caught. Prayer time is rigorously enforced. Retailers must shutter their shops for prayer five times a day, or risk imprisonment or execution, according to Khedr and Jilane. Mosques are overflowing, with men kneeling in prayer filling the streets and sidewalks as the call to prayer echoes across the city.

And while school is not yet mandatory, ISIL has implemented an entirely new curriculum, replacing science, history and arts with only Islamic studies and Arabic. The group forced former teachers under the old regime to sign a document of “repentance” and attend religious instruction classes. Children must attend mosques, where sermons double as a recruiting tool, urging young men to sign up for military training camps.

Tens of thousands of Syrians have fled Raqqa and most minorities have left, including the city’s Christian and Shiite communities. For the Christians that remain, ISIL has imposed a special “jizya,” or tax.

But the city has also become a hub for foreign fighters leaving the West and other Muslim countries to join ISIL. Along with thousands of fighters, the new society has drawn hundreds of foreign professionals, keen to offer their skills in IT, medicine, communications and civics to ISIL.

The muhajireen, or “immigrants” have altered the social fabric of the city, with North African Arabic dialects, French, Russian, Urdu and English now commonly heard in streets and cafes, according to Khedr, as Libyans, Moroccans, Tunisians, French, Chechens, Afghans and Westerners flock to the city.

The influx of foreigners — and the currency they bring — has also augmented the local economy, and a class divide has emerged.

Wealthier foreigners are paid in dollars, often over two times their Syrian counterparts, who are paid in the depreciating Syrian pound, according to Khedr. The injection of cash has driven up prices of basic goods and accommodation, according to Khedr and others, who said Syrians can no longer afford to compete.

He said the muhajireen earn between $600 — $800 a month, while the average Syrian salary previously had been about $400 a month, and is now closer to $75 because of currency depreciation.

Al-Jilane said the muhajireen were often given incentives to immigrate, including gas and electricity at subsidized rates and free housing.

“Electricity is provided for only two hours a day and there is a 3,000 Syrian pound fee (about $16) per month,” he said, adding that the migrants are often provided with free generators.

From his new, temporary home in the Turkish city of Sanliurfa, where he fled with his family in June so he could be treated for cancer, 45-year-old Ahmed said that Syrians now have second-class status in Raqqa.

“They are everywhere,” he said of the foreigners. “They occupy the houses of those that have fled, or sometimes just take apartments that they like in the good neighborhoods.” He said foreign fighters accused a friend of his of being associated with the regime and seized his home.

He said he was in Raqqa he was stopped in the street by a group of muhajireen who demanded to inspect his phone for any undesirable contacts.

“They raid Internet cafes and inspect mobile phones to see who you are talking to.”

But with no political solution to the conflict in Syria in sight, and exhausted after four years of war and neglect under the regime of Bashar Assad, some Raqqa residents welcome the restoration of administration in the city. Although under tight control, Raqqa offers one of the few places of order in a country wracked by the chaos of civil war.

“We have got used to it,” explained a Raqqa resident, who gave only his first name as Mohammed, citing fear of reprisals, as he waited to cross back into Syria from the Turkish Akcakale border crossing in January.

“If you are a good Muslim, you have nothing to worry about. As long as you pray five times a day, wear the niqab and don’t smoke,” he said.

Trading cotton across the border in Turkey from the plantations ISIL took control of over a year ago, Mohammed and others even praised the new administration.

Mohammed said he was offered a better salary by the group than he earned as a civil servant under Assad. After spending two years as a refugee in Turkey, he decided Syria under ISIL offered him a better standard of living.

Crime has also been all but eradicated given the extraordinary punishment and security apparatus.

“Imagine living in a drug-free society… where you can leave your business open and no one touches your stuff,” he said.

But for many Syrians, the harsh new security state is an affront to their moderate values, and an atmosphere of fear and suspicion pervades the city.

Ahmed said the risk of death was a pervasive reality.

“I was driving with my children and nephews home one evening and there, in the center of the roundabout were three decapitated soldiers. Their heads had been impaled.”

“I couldn’t stop my kids from seeing it.” said Ahmed. “They call themselves Islamic, but this is not Islam.”