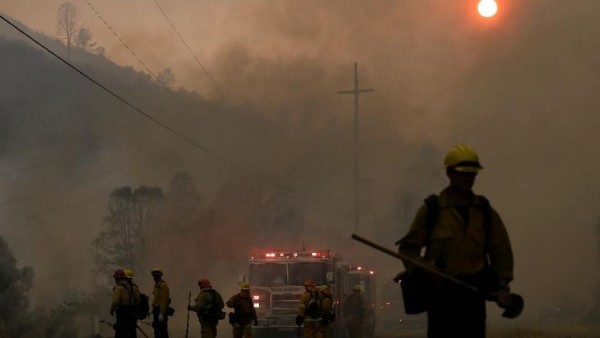 Firefighters walk under smoke from fires along Morgan Valley Road near Lower Lake, Calif., Friday, July 31, 2015. A series of wildfires were intensified by dry vegetation, triple-digit temperatures and gusting winds. (AP Photo/Jeff Chiu) (The Associated Press)
Share:
Blazes raging in forests and woodlands across California have taken the life of a firefighter and forced hundreds of people to flee their homes as an army of firefighters continue to battle them from the air and the ground.

Twenty-three large fires, many sparked by lightning strikes, were burning across Northern California on Saturday, said state Department of Forestry and Fire Protection spokesman Daniel Berlant. Some 8,000 firefighters were attempting to subdue them, something made incredibly difficult by several years of drought that have dried out California.

“The conditions and fire behavior we’re seeing at 10 in the morning is typically what we’d see in late afternoon in late August and September,” said Nick Schuler, a division chief with the state Department of Forestry and Fire Protection. “But because of the dry conditions, because of the drought-stricken vegetation accompanied by the steep terrain and winds, we’re seeing fire activity that’s abnormal for this time of year.”

In the Modoc National Forest, about a hundred miles south of Oregon, David Ruhl, an engine captain from South Dakota’s Black Hills National Forest, was killed fighting a fast-moving blaze. He had vanished Thursday while fighting the 800-acre fire and his body wasn’t recovered until Friday.

The biggest fire was in the Lower Lake area north of San Francisco where firefighters had to wade through thick smoke and flying embers to turn loose horses, goats and other livestock in rural neighborhoods as their owners fled to safety. The fast-moving fire had burned three homes by Friday and was threatening 450 other structures. Only 5 percent contained, it had spread across 28 square miles and was growing quickly.

The fires prompted Gov. Jerry Brown to declare a state of emergency for California on Friday. As part of the order, he activated the California National Guard to help with disaster recovery.

Berlant said firefighters were hoping cooler weather might help them this weekend, but there was also the threat that lingering thunderstorms could bring more lightning strikes like those that ignited several of the fires.

The fast-spreading wildfire near Lower Lake north of San Francisco has torched three homes and is threatening more than 450 structures.

At least 650 residents have been evacuated from their homes as the blaze raged in hills covered in dense brush and oak trees and dotted with ranch homes. It has charred 28 square miles near Lower Lake, south of Clear Lake, a popular summer recreation spot.

Only 5 percent contained, it was moving southwest toward Lower Lake and Clear Lake.

“We saw it behind our house. We saw the smoke pouring over. So we just started collecting stuff and we left, to find out later that everyone was evacuated out here,” said resident Julie Flannery.

When they returned Friday they found their two horses and one mule were gone. They hoped firefighters turned them loose so they could make their way to safety.

“The rest of this is just material stuff,” she said. “The animals and the family is the most important.”

Crews battling a fire east of Napa Valley held their ground Friday, more than a week after it started.

The blaze has charred more than 12 square miles in Solano County. The fire is about 45 miles east of Napa’s wine county, and vineyards are not threatened.

At least 136 structures are threatened, but evacuation orders have been lifted. It is mostly contained, and crews expect to have it fully corralled by Monday.

A woman was arrested in connection with a small fire near Groveland, a stop-off point for travelers headed to Yosemite National Park.

The 200-acre fire, about 20 miles from the park’s entrance, was 45 percent contained Friday. About two dozen homes are threatened and voluntary evacuations are in place.

Lisa Ann Vilmur was arrested Thursday night for recklessly causing a fire and jailed on $100,000 bail. It was not known Friday if she has an attorney.

In a separate foothills blaze northeast of Sacramento, evacuation orders have been lifted for residents of 50 homes. The fire, which ignited Saturday, burned through more than 3 1/2 square miles and is almost fully contained.

Residents of 200 homes in the central California community of Cascadel Woods were ordered to evacuate Thursday.

A wildfire burning near Bass Lake for several days spread to more than 6 square miles and is partially contained.

Authorities say a boy acknowledged starting the fire by playing with a lighter to burn pine needles in the dry Sierra Nevada. They say the boy faces criminal charges but is not in custody because he and his family are cooperating.

Engine Captain David Ruhl of South Dakota was killed battling the fire that broke out Thursday in the Modoc National Forest about 100 miles south of Oregon.

The firefighter had vanished Thursday and his body wasn’t found until Friday. U.S. Forest Service officials didn’t immediately reveal the cause of death.

Ruhl, who was assigned to a Black Hills National Forest firefighting team, had been helping California firefighters since June.

The fire broke out southeast of Lava Camp and rapidly grew to consume 800 acres. No containment figure was immediately given.