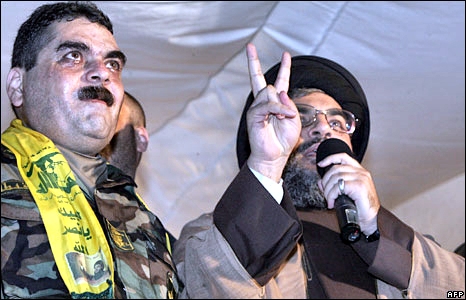 Samir Kuntar with Hezbollah Chief Hassan Nasrallah after he was released from jail by Israel in 2008
Share:

An Israeli air strike on a government-held village on the Syrian side of the Golan Heights ceasefire line killed five pro-regime forces on Wednesday, a monitoring group said.

“An Israeli plane hit a car inside the town of Hader, killing two men from (Lebanese Shiite group) Hezbollah, and three men from the pro-regime popular committees in the town,” said Rami Abdel Rahman, director of the Syrian Observatory for Human Rights.

Hader is a Druze village that lies along the ceasefire line, with the Israeli-occupied portion of the Golan Heights plateau to the west, and the border with Damascus province to the northeast.
Samir Kuntar targeted
According to Israeli media Reports Israel targeted and killed Samir Kuntar in its airstrike . He is one of the 2 Hezbollah members killed in the airstrike

Kuntar was born in Lebanon .In 1978 he and three other terrorists from the now-defunct Palestine Liberation Front (PLF) snuck into Israel by boat and attempted to kidnap the Haran family from their home in Nahariya. The wife managed to hide in a crawlspace with the two-year-old daughter, but the husband and four-year-old were taken.

Kuntar and his associates took their hostages to the nearby beach, where Israeli soldiers and police officers encountered them. According to the official account, Kuntar shot the father in the back, then beat the daughter to death.

Back at the house, the wife accidentally smothered the younger daughter to death while trying to prevent her from crying out and giving away their hiding spot.

Kuntar served 29 years in prison before being released in exchange for the bodies of Ehud Goldwasser and Eldad Regev in 2008 that were kidnapped by Hezbollah in 2006 .

After his release, Kuntar returned to a hero’s welcome by Hezbollah in Lebanon. Several months later Syrian dictator Bashar al-Assad presented Kuntar with the Syrian Order of Merit.

This is the second time that Kuntar is reported dead . Last January he was reportedly killed in a similar airstrike by Israel

In Lebanon, the Popular Front for the Liberation of Palestine said Israeli warplanes struck near the Lebanese border with Syria, wounding six. The jets hit an arms depot in the area of Qousaya in the Bekaa region in eastern Lebanon, the group, which has close links to the Iran-backed Lebanese Shi’ite movement Hezbollah, added.