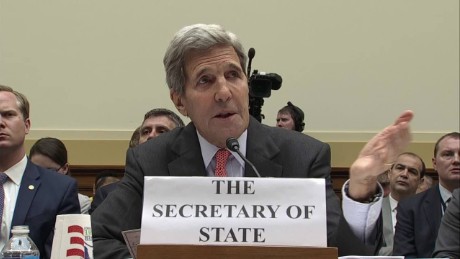 Secretary of State John Kerry intensified efforts to beat back criticism of the Iran nuclear deal stressing that an alternative to the deal is a unicorn fantasy
Share:

Secretary of State John Kerry intensified efforts to beat back criticism of the Iran nuclear deal and convince US lawmakers that rejecting it would give Tehran a fast track to a weapon and access to billions of dollars from collapsed sanctions.

Days after tough questioning by lawmakers at an emotional Senate hearing, Kerry sharpened his response to criticism that the deal’s provisions were temporary and would not prevent Iran from obtaining a nuclear weapon in the long run.

Challenged even by some of his fellow Democrats, Kerry said: “If you kill the deal, you are not making America safer.” Joined by Treasury Secretary Jack Lew and Energy Secretary Ernest Moniz, Kerry was part of the President Barack Obama’s effort to coax skeptical lawmakers into supporting the nuclear pact.

Congress has until Sept. 17 to endorse or reject it. Rejection would prevent Obama from waiving most U.S.-imposed sanctions on Iran, a key component of the deal.

Under the July 14 pact, world powers agreed to lift sanctions in return for curbs on a nuclear program the West suspects was aimed at creating an atomic bomb, but which Tehran says is peaceful.

The four-hour hearing grew heated as some House Republicans shouted at Kerry. Senate Republicans last week accused him of having been “bamboozled” and “fleeced.”

At times, Kerry visibly lost patience, saying he was hearing many complaints, while opponents offered no alternative. “What this agreement is supposed to do is stop them from having a nuclear weapon. Now I want to hear somebody tell me how they’re going to do that without this agreement,” he said. Kerry insisted walking away would isolate the United States. “If we walk away, we walk away alone. Our partners are not going to be with us,” Kerry said.

Lew said that other countries would not keep the sanctions against Iran in place.
“You could end up with Iran getting access to that money without the benefit of an agreement, which would be a very bad outcome,” he noted.

Both Republicans and Democrats signaled the potential difficulty in getting Congress on board. Representative Ed Royce, the committee’s Republican chairman, said the deal gives Iran a “cash bonanza,” while weakening Washington’s ability to pressure Tehran. Representative Eliot Engel, the top Democrat, said he saw a number of troublesome issues.

Others expressed concern about Americans held in Iranian prisons or worried about Iran’s backing militants. “They support Hamas, Hezbollah and Houthi, and those are just the organizations that begin with the letter ‘H,’” said Democratic Representative Brad Sherman. Although Republicans control majorities in the House and Senate, they would need Democratic votes against Obama to override a promised veto if Congress rejects the nuclear pact. Many Democrats have not decided how they will vote when Congress returns in September from a five-week recess, but several have come out in favor.

Representative Sander Levin, the longest serving Jewish member of the House, issued a statement on Tuesday backing the deal.

Jewish lawmakers known as strong supporters of Israel, such as Engel and Sherman, have been under particularly intense pressure over the deal. Israeli Prime Minister Benjamin Netanyahu, who has cultivated a close relationship with Republicans, has called it a threat to his country’s survival.