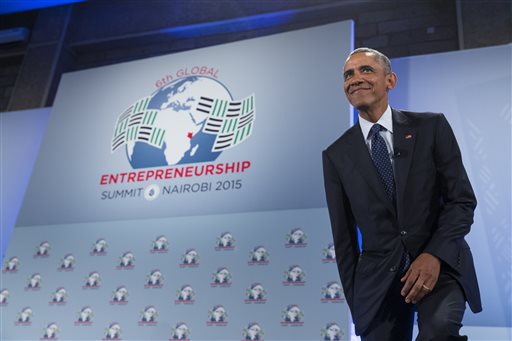 President Barack Obama smiles as he arrives to deliver a speech at the Global Entrepreneurship Summit at the United Nations Compound, Saturday, July 25, 2015, in Nairobi. Obama’s visit to Kenya is focused on trade and economic issues, as well as security and counterterrorism cooperation. (AP Photo/Evan Vucci)
Share:

Fulfilling the hopes of millions of Kenyans, Barack Obama returned to his father’s homeland Friday for the first time as U.S. president, a long sought visit by a country that considers him a local son.

The president spent the evening reuniting with his Kenyan family, including his elderly step-grandmother who made the trip to the capital of Nairobi from her rural village.

“I don’t think that Kenyans think of Obama as African-American. They think of him as Kenyan-American,” said EJ Hogendoorn, deputy program director for Africa at the International Crisis Group.

Obama’s link to Kenya is a father he barely knew, but whose influence can nonetheless be seen in his son’s presidency. Obama has spoken candidly about growing up without his Kenyan-born father and feeling “the weight of that absence.”

A White House initiative to support young men of color who face similar circumstances has become a project dear to Obama, one he plans to continue after leaving the White House.

Proud to be the first American President to visit Kenya. Happy to see family, and to talk with young Kenyans about the future.