Backed by Israel, Republicans on Wednesday forcefully challenged President Barack Obama’s nuclear deal with Iran as the White House dispatched a Cabinet-level lobbying team to build support for the agreement to ease sanctions in exchange for concessions on the Islamic nation’s nuclear program.

There were scattered Democratic concerns, as well, after classified briefings from Secretary of State John Kerry and other administration officials, although it was unclear how widespread the opposition was in Obama’s own party.

According to lawmakers emerging from the briefings, Kerry said the international coalition behind existing economic and military sanctions will collapse no matter what Congress decides, an assessment that touched a Republican sore spot.

Sen. Bob Corker, R-Tenn., who chairs the Senate Foreign Relations Committee, said the administration had “given up our veto at the U.N. on Monday,” when the United Nations Security Council voted unanimously to lift international sanctions.

Given the significance of the point, it is likely to be aired extensively Thursday when Corker convenes his committee to hear testimony from Kerry, Energy Secretary Ernest Moniz and Treasury Secretary Jack Lew on the deal Obama has hailed as historic.

Republicans made plain their skepticism even before Kerry, Moniz and Lew arrived for the meetings.

“No serious person truly believes” that the United States faces a choice between implementing the agreement and going to war with Iran, said Senate Majority Leader Mitch McConnell, R-Ky., rebutting statements from Obama.

Sen. John Cornyn of Texas, the second ranking GOP leader, noted the deal did not require the dismantling of Tehran’s nuclear infrastructure, and said, “There are tougher sanctions that will bring Iran to the table for a better deal and a good deal.”

Across the Capitol, Israeli Ambassador Ron Dermer met privately with several House Republicans. One participant in the meeting, Rep. Dave Brat of Virginia, said the diplomat’s main point had been to “pay less attention to all the details” like nuclear centrifuges, and more attention to “who’s on the other side of the ethical debate, and that is Iran.” Tehran is opposed to the existence of Israel.

Taken together, the day’s events marked the beginning of the administration’s formal attempt to secure enough votes to sustain a veto of Republican-crafted legislation that would torpedo the agreement.

The deal does not need congressional approval to take effect, but Republicans are expected to try and sink it with legislation that would block Obama from lifting sanctions lawmakers have previously put in place. The president has vowed to veto any such bill, and it would take a two-thirds majority in each house of the Republican-controlled Congress to override him.

As a result, the prospect is for a two-month campaign by the administration to find at least 34 senators or 146 House members to prevent a veto override. House Democratic leader Nancy Pelosi of California, an announced supporter of the deal, has expressed optimism that the White House can prevail.

But other Democrats had complaints in Kerry’s wake.

“I would appreciate if the secretary really showed a little more respect for members of Congress,” said Rep. Dan Lipinski of Illinois.

Among Republicans, Rep. Mike Pompeo of Kansas complained about side issues between Iran and the International Atomic Energy Agency. He quoted Kerry as saying the U.S. is just going to have to “trust” the IAEA, and added, “I just find that completely unacceptable and I don’t see how a member of Congress can vote for an agreement not knowing the full scope of what the agreement actually is.”

In a statement issued Monday, Pompeo and Sen. Tom Cotton, R-Ark., said that in a recent meeting with IAEA officials, they had been told that two side deals “will remain secret, and will not be shared with other nations, with Congress or with the public.” 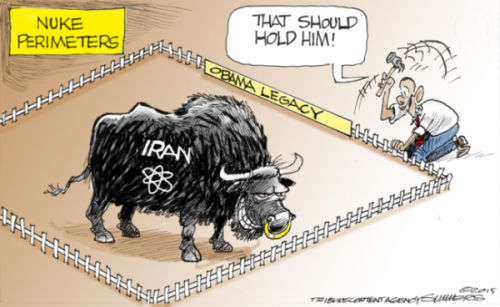 Susan Rice, Obama’s national security adviser, acknowledged that the text of a side deal between the IAEA and Iran over past military activity wouldn’t be given to Congress, but said none of the information would be withheld.

She did not address an alleged side deal relating to inspection of Iran’s Parchin military complex.

Separately, the administration sought to blunt allegations from Republicans that U.S. negotiators had merely made concession after concession in final talks that followed the announcement of a general framework this spring in Lausanne, Switzerland. In a written statement, State Department spokesman John Kirby said the United States and the other nations involved in the talks had won agreements from Iran as part of the final deal involving “weaponization, metallurgy and enrichment-related issues.”

In the days since the agreement was announced, some Republicans have announced their opposition while others said they would await briefings and other information they receive from the administration.

There is little suspense about how they will come down, though.

House Majority Leader Kevin McCarthy, R-Calif., released a list of 21 reasons to oppose the deal, including, “The murderous Syrian President Bashar al-Assad called this deal a ‘great victory’ and congratulated Iran on their achievement.”