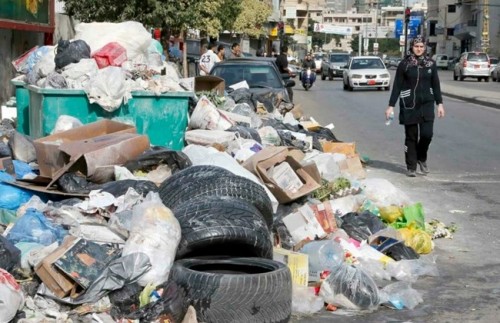 Garbage is piling up on the streets of Beirut amid a growing dispute over tiny Lebanon’s largest trash dump.

The main company in charge of picking up the trash, Sukleen, has its workers sweeping Beirut’s streets, though not picking up any of the garbage. Its spokesman said Tuesday the company can’t take any more waste to the Naameh landfill, just south of Beirut.

Naameh has been functioning since 1997, but it was scheduled to close July 17. Since then, residents of Naameh and nearby villages have prevented trucks from reaching it to unload trash.

Lebanon’s notoriously gridlock government has yet to take any action on the issue. Meanwhile, the trash pile grows as workers spray them with white powder to knock back the smell and spread of pests.

Environment Minister Mohammed al-Mashnouq vowed on Tuesday to resolve the waste management problem by implementing a plan proposed by him after the closure of the Naameh landfill sparked an environmental crisis.

Al-Mashnouq told al-Akhbar newspaper that he would start on Tuesday to take practical measures to implement the plan to transport the waste to several regions as a temporary solution pending the launching of tenders on the establishment of new landfills.

“I will not wait for the session of the cabinet,” which is set to discuss the crisis on Thursday, he said.

Al-Mashnouq ruled out the transport of waste to countries outside Lebanon because of its high cost.

“Garbage is on the streets and needs a quick solution,” he said.

Al-Mashnouq said following a meeting for the parliamentary environment committee on Tuesday that Sukleen can no longer find a place to stash the waste.

“All municipalities should help find a solution to this problem,” he said.

MP Marwan Hamadeh, who heads the committee, announced his support for the minister’s plan to create landfills in several areas and for each region to treat its waste.

“The environment committee’s meetings will be open-ended pending a solution” to the waste management crisis, Hamadeh said.

Like everything else the garbage issue is a political problem. Mashnouk can’t really do anything until all parties agree on a new company or on renewing Sukleen contract and setting up new landfills , but we could have avoided all that if the authorities encouraged municipalities to invest in recycling instead of wasting all their money on Sukleen’s services, noting that we are currently paying almost $170 per 1 ton of garbage between sweeping, cleaning, sorting, packing and dumping, which is a relatively high number, according to Lebanese media reports .

According to the reports at least 60% of our solid waste  in Lebanon is organic and for this reason, the most effective solution is to implement an adequate strategic waste management plan and encourage recycling. It is in every municipality’s interest to invest in recycling and promote environmentally friendly solutions to save money, protect the environment and more importantly their own residents.

Incineration of MSW streams allows for the production of electricity and since all the country suffers from daily   blackouts , generating power from garbage will hit 2 birds with one stone .

In the Netherlands, 2535 GWh electricity was produced in 2004 from MSW of which 78% has been delivered to the grid or to other installations.