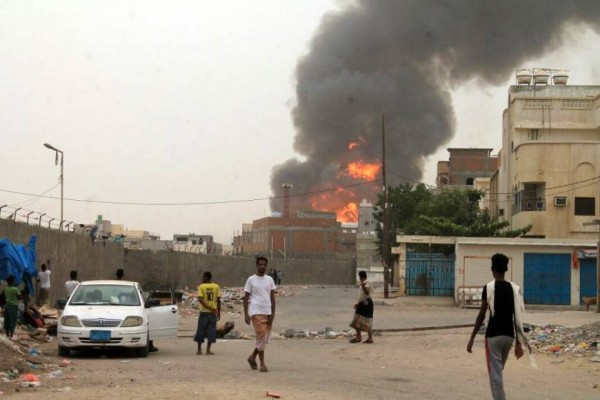 Yemenis watch as smoke billows following clashes between fighters loyal to exiled President Abed Rabbo Mansour Hadi and Houthi rebels, in the Dar Saad suburb of the southern Yemeni city of Aden on Sunday. The rebel bombardment of Dar Saad has so far claimed almost 100 lives, officials said Monday. | AFP-JIJI
Share:
The death toll in Yemen from the Shiite rebel shelling of a town near the southern port city of Aden rose Monday to nearly 100, the head of an international aid group said, describing it as “the worst day” for the city and its surroundings in over three months of fighting.

The rebels, known as Houthis, and their allies started shelled the town of Dar Saad on Sunday after earlier losing control of some of Aden’s neighborhoods. The violence highlighted the bloody chaos of the civil war gripping the Arab world’s poorest country, which also has been the target of Saudi-led, U.S.-backed airstrikes since late March.

Hassan Boucenine of the Geneva-based Doctors Without Borders said that by Monday, his organization reported nearly 100 people dead, twice the casualty toll from the previous day.

The shelling also wounded about 200 people, said Boucenine, the head of the organization in Yemen. Of the victims, 80 percent are civilians, including many pregnant women, elderly and children, he added.

“Yesterday was the worst day in Aden since (the Saudi-led coalition campaign) started in March,” Boucenine told The Associated Press, adding that he fears “attacks on civilians will continue.”

Sunday’s shelling in Dar Saad began after the Houthi rebels lost control of much of the Aden district of Tawahi, according to officials and witnesses. Tawahi is now under a security lockdown, the officials said, as anti-Houthi forces search buildings looking for rebels, some of whom had fled to the nearby mountains.

The coalition also struck the home of Mehdi Meqlawa, a prominent supporter of former President Ali Abdullah Saleh, in a Sanaa suburb. In the Yemeni capital, it also hit Houthi headquarters near the Souq Aziz market, killing one person.

Rebel shelling continued Monday in Taiz, Yemen’s third-largest city, killing eight residents, while ground fighting raged on in Marib, with six anti-Houthi tribesmen and 10 Houthi fighters killed in clashes. All officials and eyewitnesses spoke on condition of anonymity because they were not authorized to talk to reporters or feared reprisals.

The spokesman of the Yemeni government in exile, Rageh Badie, said they appointed the head of the Resistance Council, Nayef al-Bakri, as governor of Aden. Al-Bakri served as deputy to the former governor, Abdulaziz bin Habtoor, who fled the embattled city earlier this year. Al-Bakri is joined by the exiled deputy minister of health and the transportation and interior ministers, who have flown into Aden two days ago from Saudi Arabia. Other exiled ministers will follow suit over the next few weeks, Badie said.

On Monday evening, a car bomb went off near the house of a Houthi rebel leader in the capital Sanaa, killing seven and damaging the gates of the house, according to witnesses and officials.

Medical officials said six people were also wounded in the attack. One security official said five were killed. It was not possible to reconcile the difference in casualty figures, common in the immediate aftermath of such attacks. A local affiliate of the Islamic State group claimed responsibility for the car bomb in the western Garef neighborhood, saying it targeted a “den” of the Houthis, according to a statement shared on Twitter accounts of supporters of the IS group.

It was not immediately clear if the Houthi leader, Ihab al-Kuhlani, was at home at the time of the attack and whether he was affected by the bombing.

The Houthi tv station Al-Masirah reported only that a car bomb went off in the Garef Neighborhood, without offering further details.

The area around the house was cordoned off by Houthi security forces after the attack.

Yemen’s conflict pits the Iran-allied Houthis and troops loyal to the former president, Saleh, against an array of forces, including southern separatists, local and tribal militias, Sunni Islamic militants as well as loyalists of exiled President Abed Rabbo Mansour Hadi, who is backed internationally.