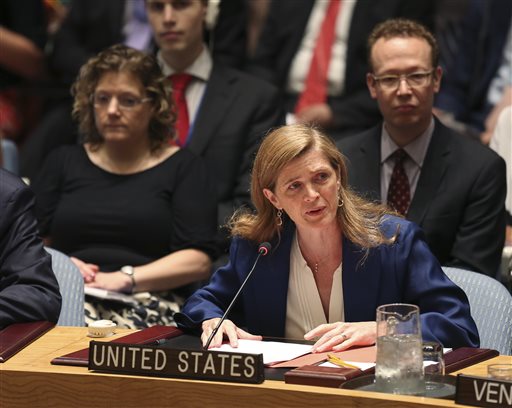 Samantha Power, United States Ambassador to the United Nations, speaks after a vote in the Security Council at U.N. headquarters, Monday, July 20, 2015. (AP Photo/Seth Wenig)
Share:
The U.N. Security Council on Monday unanimously endorsed the landmark deal to rein in Iran’s nuclear program and authorized measures leading to the end of U.N. sanctions, but also approved a provision that would automatically reinstate the harsh measures if Tehran reneges on its promises.

President Barack Obama told reporters he hopes the Republican-controlled U.S. Congress, where there is strong opposition to the deal, will pay attention to the “broad international consensus,” stressing that the deal is “by far our strongest approach to ensuring that Iran does not get a nuclear weapon.”

But House Speaker John Boehner accused Obama of “ignoring the concerns of the American people” by allowing “such a consequential vote” to go ahead in the U.N. just 24 hours after submitting the agreement to Congress, which has 60 days to consider it. “This is a bad start for a bad deal,” he said.

While sharp differences remain between the United States and Iran, ambassadors from both countries called the agreement an important achievement for diplomacy.
Under the agreement, Iran’s nuclear program will be curbed for a decade in exchange for potentially hundreds of billions of dollars’ worth of relief from international sanctions. Many key penalties on the Iranian economy, such as those related to the energy and financial sectors, could be lifted by the end of the year.

Khoshroo said Iran promises to be “resolute in fulfilling its obligations” and expects all other parties to the agreement to meet their commitments. This is the only way diplomacy can “prevail over conflict and war in a world that is replete with violence, suffering and oppression,” he said.

The Iranian ambassador said the agreement “provides a solid foundation for further and more effective diplomatic interaction.” And he expressed hope that the agreement heralds “a new chapter” in the country’s relations with the Security Council and the six powers that negotiated the deal — the United States, Russia, China, Britain, France and Germany.

U.S. Ambassador Samantha Power said the deal gives Iran “an opportunity to prove to the world that it intends to pursue a nuclear program solely for peaceful purposes.”

“If Iran seizes that opportunity … then it will find the international community and the United States willing to provide a path out of isolation and toward greater engagement,” she said.

But Power said the nuclear deal doesn’t change the United States’ “profound concern about human rights violations committed by the Iranian government or about the instability Iran fuels beyond its nuclear program, from its support for terrorist proxies to repeated threats against Israel to its other destabilizing activities in the region.”

She urged Iran to release three “unjustly imprisoned” Americans and to determine the whereabouts of Robert Levinson, a former FBI agent who vanished in Iran in 2007.

Khoshroo departed from his prepared speech to react to what he called “baseless accusations” from Power.

He accused the United States of “feckless and reckless acts” by invading Iraq and Afghanistan. These invasions “created favorable ground for the growth of terrorism and extremism” and are at the root of many challenges facing the unstable region, he said.

Obama has stressed that all of Iran’s pathways to a nuclear weapon are cut off for the duration of the agreement and Iran is obliged to remove two-thirds of its installed centrifuges and get rid of 98 percent of its stockpile of uranium.

But Russia’s U.N. Ambassador Vitaly Churkin said the Security Council “has confirmed the inalienable right of Iran to develop its peaceful nuclear program, including to enrich uranium” under supervision by the International Atomic Energy Agency.

The resolution specifies that seven previous resolutions related to U.N. sanctions will be terminated when Iran has completed a series of major steps to curb its nuclear program and the IAEA has concluded that “all nuclear material in Iran remains in peaceful activities.”

All provisions of the U.N. resolution will terminate in 10 years, including the “snap back” provision that would make it easier to reimpose sanctions.

But last week the six major powers and the European Union informed U.N. Secretary-General Ban Ki-moon that they have agreed to extend the snap back mechanism for an additional five years. They asked Ban to send their letter to the Security Council.