Children being trained at I.S. camps to “Behead the doll” 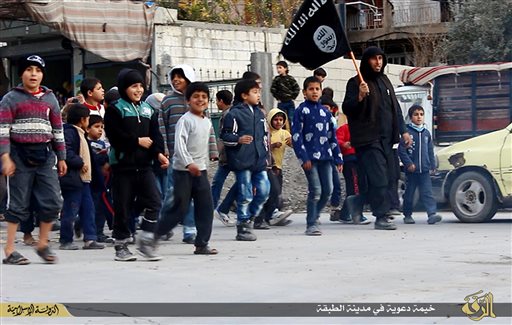 In this photo released on Jan. 14, 2015, by a militant website, which has been verified and is consistent with other AP reporting, Syrian boys, left, follow an Islamic State militant, right, holding his group’s flag, during a street preaching session in al-Tabqa in Raqqa province, northeast Syria. IS extremists have made it a priority to mold children under their rule into a new generation of militants, luring them into becoming fighters, suicide bombers and executioners. (Militant website via AP)
Share:

The children each received a doll and a sword. Then they were lined up, more than 120 of them, and given their next lesson by their Islamic State group instructors: Behead the doll.

A 14-year-old who was among the line of abducted boys from Iraq’s Yazidi religious minority said that at first, he couldn’t cut it right — he chopped once, twice, three times.

“Then they taught me how to hold the sword, and they told me how to hit. They told me it was the head of the infidels,” the boy, renamed Yahya by his Islamic State captors, recalled in an interview last week with The Associated Press in northern Iraq, where he fled after escaping the IS training camp.

When Islamic State extremists overran Yazidi towns and villages in northern Iraq last year, they butchered older men. Many of the women and girls they captured were given to IS loyalists as sex slaves. But dozens of young Yazidi boys like Yahya had a different fate: the group sought to re-educate them. They forced them to convert to Islam from their ancient faith and then tried to turn them into jihadi extremist fighters.

It is part of a concerted effort by the extremists to build a new generation of militants, according to a series of AP interviews with residents who fled or still live under IS in Syria and Iraq. The group is recruiting teens and children, using cash, gifts, intimidation and brainwashing. As a result, children have been plunged into the group’s atrocities. Young boys have been turned into killers, shooting captives in the head in videos issued by the group. Last week, for the first time, a video showed a child involved in a beheading: a boy who appeared younger than 13 decapitating a Syrian army captain. Kids also have been used as suicide bombers.

In schools and mosques, the militants infuse children with their extremist doctrine, often turning them against their own parents. Fighters in the street befriend children with toys. IS training camps for children churn out the Ashbal, Arabic for “lion cubs,” young fighters for the “caliphate” that IS has declared across the regions its controls. A caliphate is a historic form of Islamic rule that the group claims to be reviving, though the vast majority of Muslims reject its claim.

“They are planting extremism and terrorism in young people’s minds,” said Abu Hafs Naqshabandi, a Syrian sheikh in the Turkish city of Sanliurfa, where he runs religion classes for refugees to counter IS ideology. “I am terribly worried about future generations.”

The indoctrination mainly targets the Sunni Muslim children living under IS rule. But the abduction of the Yazidis, whom IS considers heretics ripe for slaughter, shows how the group sought even to take another community’s youth, erase its past and replace it with IS radicalism.

The camp where Yahya and other Yazidi boys were taken was the Farouq Institute for Cubs in the Syrian city of Raqqa, which serves as the extremists’ de facto capital. The boys were given Muslim Arabic names to replace their Kurdish-language names. Yahya asked that the AP not use his real name because of fears of retaliation against himself or his family.

Yahya, his little brother, their mother and hundreds of Yazidis were captured when the extremists overran the town of Sulagh in northern Iraq last year. They were taken to Syria, where the brothers were separated from their mother and put in the Farouq camp, along with other Yazidi boys aged between 8 and 15, Yahya told the AP.

He spent nearly five months there, undergoing eight to 10 hours a day of training, including running, exercising, weapons’ training and studying the Quran. The boys hit each other in some exercises. Yahya said he punched his 10-year-old brother, knocking out his tooth.

“I was forced to do that. (The trainer) said that if I didn’t do it, he’d shoot me,” he said. “They … told us it would make us tougher. They beat us everywhere with their fists.”

In an online IS video of the Farouq camp, boys in camouflage do calisthenics. Some repeat back religious interpretation texts they have memorized justifying the killing of prisoners and infidels. An IS fighter sitting with a line of boys says they have studied the principles of jihad “so that in the coming days God Almighty can put them in the front lines to battle the infidels.”

IS videos from other training camps show young boys in military fatigues marching with weapons, crawling under barbed wire and practicing shooting. One child lies on the ground and fires a machine gun; he’s so small that the recoil bounces his whole body back a few inches. Other scenes show boys undergoing endurance training. They stand unmoving as a trainer punches them or hits their heads with a pole. They lie on the ground as a trainer walks on them.

Most of the children look stony-faced, their only emotion a momentary flicker as they try to remember texts they are told to recite.

“By God, (Barack) Obama and all those allied against the State, we will kill you. Who will? We lion cubs of the caliphate,” proclaims one boy who looks younger than 10, holding an automatic rifle as he addresses the U.S. president.

IS has claimed to have hundreds of such camps, though the true number is not known — nor the number of children who have gone through the training. The Syrian Observatory for Human Rights, a Britain-based organization that follows the Syrian war, said it documented at least 1,100 Syrian children under 16 who joined IS so far this year, many of whom were then sent to fight in Syria and Iraq. At least 52 were killed, including eight who blew themselves up in suicide attacks, the organization said.

The effects of the indoctrination are chilling. In an IS video released last month, 25 young boys with pistols take position between 25 captured Syrian soldiers brought into the ancient Roman amphitheater in the Syrian city of Palmyra. Unflinching, each boy shoots a soldier in the back of the head. Previous videos have shown boys killing what IS alleged were an Israeli spy and two Russian agents.

Often, recruiting starts on the streets of IS-held areas at outdoor booths called “media points,” where militants show young people propaganda videos. Militants hold outdoor events for children, distributing soft drinks, candy and biscuits, along with religious pamphlets and CDs. Bit by bit, the idea of jihad as a duty is drilled into young minds. The Islamic State group’s acolytes distribute toys in the street and tell children to call them if they want to join, according to an anti-IS activist who recently fled Raqqa.

“They tell (adults) … ‘We have given up on you, we care about the new generation,'” the activist said, speaking on condition of anonymity to preserve the safety of relatives living under IS rule.

One Raqqa resident told the AP of his neighbor’s 16-year-old son, Ahmed, who spent long hours at his local IS-run mosque. Ahmed began picking fights with his family, telling his older brother and parents they were bad Muslims because they didn’t pray.

In November, when he told his family he wanted to join IS, his mother wept, while his father told him his family would never take him back. The teen vanished 10 days later. His father was told by IS members that his son was fighting for the group in eastern Syria and he should be proud of him.

“They turned him against his family. They convinced him they were apostates,” said the neighbor, a friend of the parents who also spoke on condition of anonymity for fear of retaliation. Ahmed’s family members refused to speak to the AP, fearing IS might punish their son for anything they say.

Some parents in IS-run areas take their children out of schools to avoid IS brainwashing.

In Eski Mosul, a town in northern Iraq recently liberated from IS, residents showed the AP a book the militants used to lecture children titled “The Clear Evidence of the Heresy of Those Who Support the Crusader Campaign against the Islamic Caliphate.”

“America is the head of the infidels, atheism and the central base of corruption and moral decay — it is the land of shame, crime, filth, and evil,” the book says.

Umm Ali, a woman from the predominantly Kurdish Syrian town of Afrin who worked in fields held by the extremists in Aleppo province, said her sons were approached by Islamic State members several times, and she hated that children saw beheadings and other punishments carried out in public squares.

“I saw one man hanging from a pole, his body badly tortured. Children were taking photographs. It’s horrible, horrible,” she said, crying. She spoke at a health clinic in Gaziantep, Turkey, where she had fled with her six children.

Even in refugee camps, children are not out of IS reach. Often under the guise of humanitarian organizations, the IS organizes religious lessons to recruit people, said Naqshabandi, the Syrian sheik. The militants would pay students who enroll 300 Turkish liras ($110) a month, said Abu Omar, a field worker at the camps.

“They taught us to hate,” said a 15-year-old former refugee camp resident who witnessed IS indoctrination, speaking on condition of anonymity to protect himself and his family. “This is what they teach” — and he moved his hand sharply across his throat.

Yahya, the Yazidi boy, escaped the IS training camp in early March, when IS fighters left to carry out an attack. As the remaining guards slept, he said he and his brother slipped away, telling the other children he was going to throw out the garbage. He asked one friend to come with them, but the friend chose to stay. He was Muslim now, the friend said. He liked Islam.

Yahya knew his mother was staying in a house nearby with other abducted Yazidis, since he had occasionally been allowed to visit her. So he and his brother went to her, and then travelled to the IS-held northern Syrian city of Minbaj with some fellow Yazidis. There, they stayed with a Russian member of IS, Yahya said. After that, he contacted his uncle in northern Iraq, who negotiated to pay the Russian for the two boys and their mother. A deal struck, the Russian sent them to Turkey to meet the uncle and they made their way to the city of Dohuk in the Kurdish autonomous zone of northern Iraq.

Now in a house in Dohuk rented by the uncle, Yahya and his brother spend much of their time watching TV, grateful to be back with their mother and away from the terrifying camp, where they were forced to watch videos of beheadings.

“I was scared,” Yahya said. “I knew I wouldn’t be able to behead someone like that. Even as an adult.”