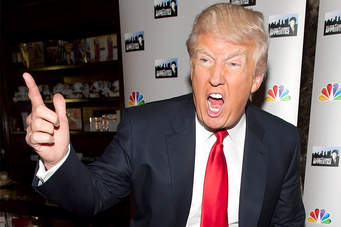 Donald Trump attacked the Arizona senator John McCain on Saturday, for being shot down while a navy pilot during the Vietnam war.

Trump, who has been in a war of words with the 2008 Republican nominee, jibed of McCain: “He’s not a war hero. He’s a war hero because he was captured? I like people who weren’t captured.”

His words prompted a strong response from Republican candidates for president in 2016 – more immediate and forceful, indeed, than such reactions to Trump’s recent comments on Mexico and immigration.

The former Texas governor Rick Perry said the remarks represented “a new low in American politics” and demanded that Trump “immediately withdraw from the race for president.”

McCain was held prisoner by North Vietnam for five and a half years, and repeatedly tortured. Trump received several student deferments from Vietnam while in college. After graduating, he received a medical deferment.

Trump’s remarks came in a question and answer session at the Family Leadership Summit, a gathering of social conservatives in Ames, Iowa, at which a number of Republican presidential candidates were scheduled to appear. Amid continuing controversy over his remarks about Mexico and immigration, Trump is running at the top of most polls of the 15-strong field.

His jibe at McCain came in the midst of back-and-forth remarks between the two, in which McCain claimed the attendees at a recent Trump event in Arizona were “crazies”.

Trump responded by calling the Arizona senator “a dummy” because McCain graduated last in his class from the Naval Academy.

In a press conference on Saturday, Trump refused to apologize and said he had nothing to apologize for. Instead, he insisted that he was criticizing McCain for “not doing enough for our veterans”.

He went on to refer to a recent high-profile prisoner of enemy forces, from the Afghanistan war, when he insisted: “If a person is captured, they are a hero as far I’m concerned. Unless they are [Bowe] Bergdahl.”

Trump defended his words on stage by saying: “I am not supposed to respect the people who didn’t get captured?”

A number of Trump’s Republican opponents were quick to criticize his comments. Former Texas governor Rick Perry released a statement, which said: “Donald Trump should apologize immediately for attacking Senator McCain and all veterans who have protected and served our country.

“As a veteran and an American, I respect Senator McCain because he volunteered to serve his country. I cannot say the same of Mr Trump. His comments have reached a new low in American politics. His attack on veterans makes him unfit to be Commander-in-Chief of the US armed forces, and he should immediately withdraw from the race for president.”

South Carolina senator Lindsey Graham, a friend of McCain, has been a vociferous critic of Trump. On Twitter, he said: ”If there was ever any doubt that Donald Trump should not be our commander in chief, this stupid statement should end all doubt.”

The most pointed response came from Louisiana governor Bobby Jindal, who tweeted: “After Donald Trump spends six years in a POW camp, he can weigh in on John McCain’s service.”

A McCain spokesman did not immediately respond to a request for comment.

Trump did not just attack McCain. The former host of Celebrity Apprentice also took a populist note in going after the current system of campaign finance. The real-estate mogul defended his long history of political contributions to both parties as influence-buying: “I give to everybody and they do whatever I say,” he said.

He used this to note his independence from special interests and attacked the massive fundraising tallies achieved by Jeb Bush and Hillary Clinton.

“Those people are controlled by whoever gave them their money, and I will tell you they are totally controlled,” he said.

The socially conservative gathering also meant Trump was pressed on his personal faith. While he talked at length about attending church and his love of family, he did say to a somewhat surprised crowd that he had never asked God for forgiveness.