Greece gets relief from creditors after first austerity test 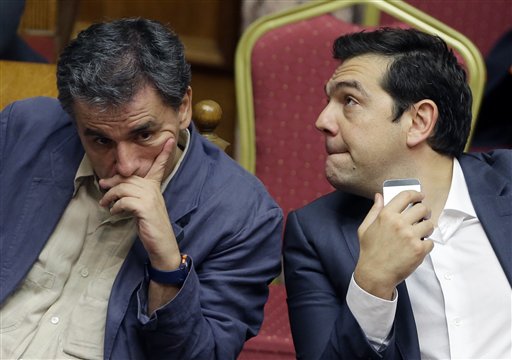 Greece got a triple dose of good news on Thursday, when creditors agreed to open talks on a third bailout package,

to give the country an interim loan to cover its debts, and to provide more support to its shuttered banks.

Greece’s fellow states in the 19-country eurozone said they were willing to open talks on a new rescue package worth 85 billion euros ($93 billion) over three years after Athens approved a series of tax hikes and economic reforms overnight.

The austerity bill triggered a revolt in the governing party and demonstrations in central Athens, one of which briefly turned violent, but was required by creditors as a precondition for starting bailout talks.

Because completing a new rescue deal is expected to take up to four weeks, Greece’s European creditors also agreed on interim financing in the meantime. European Commission head Jean-Claude Juncker confirmed that an EU-wide bailout fund would give Greece a loan to cover it through mid-August.

Finally, the European Central Bank agreed to increase the amount of emergency credit available to Greek banks by 900 million euros ($980 million) over one week, a first step toward helping them reopen.

The banks have been closed since June 29 to stanch a bank run, with Greeks limited to cash withdrawals of 60 euros ($67) per day, and the ECB had not raised the credit it makes available since last month. The extra credit is needed to make up for the constant outflow of money from the banks.

It remained unclear how quickly Greece’s banks could reopen or when they might ease the limits on cash withdrawals.

The government must now pass a second bill through Parliament next week, which includes reforms to civil justice procedures.

The requirements are part of a deal reached between Prime Minister Alexis Tsipras and other eurozone leaders after a marathon summit in Brussels last weekend, under which Greece must implement harsh austerity measures, including tax hikes and pension cuts, in return for the start of talks on its third bailout.

Tsipras, who was elected in January on promises of repealing bailout-related austerity measures, has acknowledged the deal tramples on most of his election pledges, but insists he had no other option than to accept the harsh terms offered by lenders to ensure his country’s financial system didn’t collapse.

“We had a very specific choice: A deal we largely disagreed with, or a chaotic default,” he told parliament ahead of the post-midnight vote.

Lawmakers voted 229-64 to implement the bill, in a vote that saw dozens of lawmakers from Tsipras’ own radical left Syriza party dissent and vote against him. The bill passed with a massive majority thanks to the support of three pro-European opposition parties.

Thirty-eight party lawmakers defied Tsipras — nearly one-in-four — by voting against or abstaining. They included Tsipras’ powerful energy minister, the speaker of parliament, and Yanis Varoufakis, the former finance minister who headed Greece’s bailout strategy until his replacement 10 days ago.

The government described the vote as marking a “serious division” among its lawmakers, and indicated that dissenters in Tsipras’ Cabinet would be swiftly replaced in a reshuffle.

“But the results of today’s vote constitute a serious division in the unity of Syriza parliamentary group,” he said. “The prime minister’s and the government’s priority is the successful conclusion of the agreement in the immediate future.”

The Moody’s credit ratings agency said the vote meant the country had dodged imminent danger, but that it still faced risks.

“The Greek parliamentary vote averts an immediate disorderly default and potential exit from the euro area, but risks remains elevated given Greece’s weak institutions and substantial political scepticism on the bailout conditions,” it said.

The vote came after more than two weeks of capital controls, with banks and the stock exchange shut and ATM cash withdrawals limited to 60 euros per day.

Dangerously low on liquidity at banks and with the state practically out of cash, Greece desperately needs funds.

The four-week loan that European Commission President Juncker revealed on Thursday would allow Greece to meet a debt repayment worth 4.2 billion euros ($4.6 billion) to the ECB on Monday and to pay arrears of 2 billion euros to the IMF.

Greeks have seen a dramatic decline in living standards since the debt-plagued country lost market access in 2010 and had to impose severe spending cuts in exchange for bailout loans from eurozone countries and the International Monetary Fund.

“Now I think that things will turn out for the best, as long as those in power can act with good intentions, without corruption,” said pensioner Giannis Filinis as he waited in a queue outside a bank to withdraw the maximum 120 euros for retirees without bank cards. “They should have controlled the situation and avoided bailouts, because we are the ones that have to pay for it now.”

Before the austerity vote, some 12,000 demonstrators had gathered outside parliament in the biggest protest against the government since Tsipras won elections in late January. The rally turned violent when several hundred youths attacked police, torched cars, and smashed office displays.