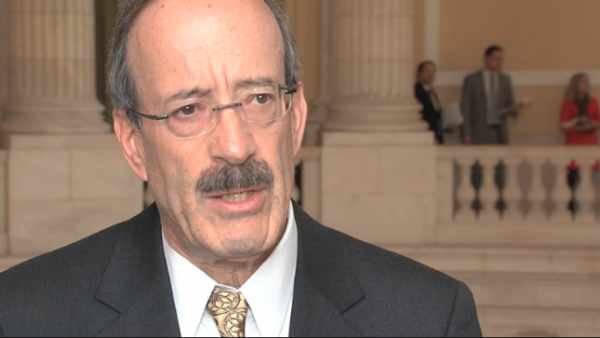 “Throughout negotiations, these issues were off the table, so seeing them included in sanctions relief is deeply troubling,” Engel said.

Last week, Pentagon leaders said at a Senate hearing that they also opposed lifting an arms embargo on Iran, as well as lifting pressure on Iran’s ballistic missile program.

“We want them to continue to be isolated as a military and limited in terms of the kind of equipment and material they’re able to [have],” Defense Secretary Ashton Carter said in response to a question about whether he supported lifting the arms embargo.

“Under no circumstances should we relieve pressure on Iran relative to ballistic missile capabilities and arms trafficking,” added Chairman of the Joint Chiefs of Staff Gen. Martin Dempsey.

Engel, who has been a strident critic of Iran and co-author of Iran sanctions legislation, could play a leading role in whether House Democrats buck the administration and reject a deal.

“I look forward to reviewing the agreement in more detail and will seek extensive briefings from the administration to examine its provisions,” he said.

However, he also made comments to suggest the Iran deal would stick.

“When sanctions are eased, then Congress must use every tool at our disposal to prevent Iran from plowing its newfound wealth into violence and turmoil,” he said.

Congress has 60 days to review the deal and either pass a resolution of approval or disapproval, or do nothing. If a resolution of disapproval is passed, the administration could veto the resolution, and Congress would need two-thirds of both chambers to override it.

Engel said if the deal goes through, Congress “must be ready” if Iran fails to comply with the agreement to pass sanctions legislation.

“In that case, we can’t only rely on snapback sanctions provided for in the agreement,” he said. “A good starting point would be the Nuclear [Iran Prevention Act], which Chairman [Ed] Royce [R-Calif.] and I passed in the last Congress,” he said.

“This legislation would target Iran’s remaining oil exports, prevent access to its overseas reserves and blacklist certain strategic sectors of the Iranian economy,” he said, noting that the House passed it by 400-20 in July 2013.

“As Congress reviews this deal, we will have to consider what the alternatives are. We will not be choosing between this deal and a perfect deal,” he said.

He said a military strike would have “severe consequences” for U.S. allies and interests in the region but also called for a “credible threat” to remain on the table.

“But no matter what the agreement says, we should be clear: Our issues with Iran are far from resolved,” he said.

“The Iranian regime remains intent on stoking instability and sectarian violence in Yemen, Syria, Lebanon and Iraq. It also continues to support terrorist organizations that threaten Israel,” he said.

“Iran’s negative impact in the region fuels my concern about what Iran’s leaders will do if sanctions are lifted. That will allow resources to flow freely into Iran’s coffers,” he said.

“Iran has transferred millions to Gaza in recent months, which will help Hamas rebuild the tunnels it uses to kidnap, kill and terrorize Israelis. We need to make sure that a nuclear deal doesn’t make these problems worse,” he said.